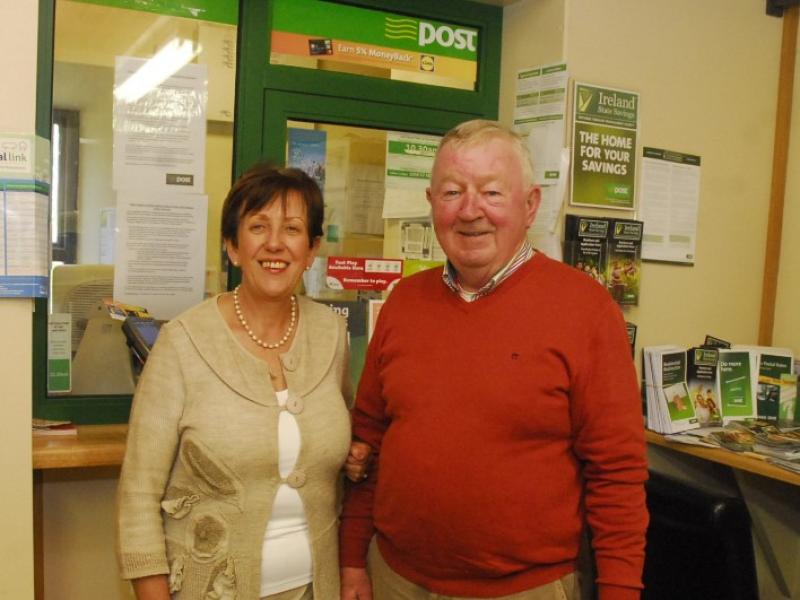 Patricia and Seamus Reynolds at the closing of Killargue Post Office

Killargue are without a post office from today, as Postmistress Patricia Reynolds closed the doors for the last time last Friday, August 31.

Killargue along with Aghacashel and Aughavas closed this term. Aughavas are still fighting for the retention of services, while Newtowngore Post Office expects to close in January.

The rest of Leitrim can breathe a sigh of relief that they kept their post offices, for now.

According to the Irish Postmasters Union the next  review of the Network is planned to take place in 2020.

The Irish Postmasters Union (IPU) have thanked and wished well Postmasters and Postmistresses across the country who have voluntarily opted to close their Post Offices.

This follows the announcement by An Post that 159 Post Offices have opted to retire and accept a voluntary exit package offered under a plan which was agreed between the IPU and An Post.

The €50m investment plan was agreed by the IPU Executive and An Post last April and supported by 80% of IPU members in a Ballot.

IPU General Secretary Ned O’Hara said, “It is with regret that any Post Office is closing. However, the IPU would like to thank all Postmasters and Postmistresses who have opted for the exit package for their service as colleagues and as community people over many years. The Union understands and respects their decision.For many years the IPU has highlighted the serious challenges faced by the Post Office Network and we backed a reform and development plan last May. This plan aims to secure as strong a future as possible and we believe it is the best way forward."

A key part of the plan is commitment by An Post that significant new services would be rolled out to all remaining Post Offices including:

“We need to see this part of the plan now begin implementation. The IPU is today calling on An Post to publish a timeline for roll out of new services, so as the 960 Post Offices can offer more services to the public and develop their businesses”, Mr O’Hara said.

It also stressed the fundamental importance of Social Welfare payments continuing to be transacted in Post Offices in the long term. The word on the ground is that if you want to keep your local post office, then use it.

A feature on the closing of Killargue Post Office will be in this week's Leitrim Observer - out Wednesday.