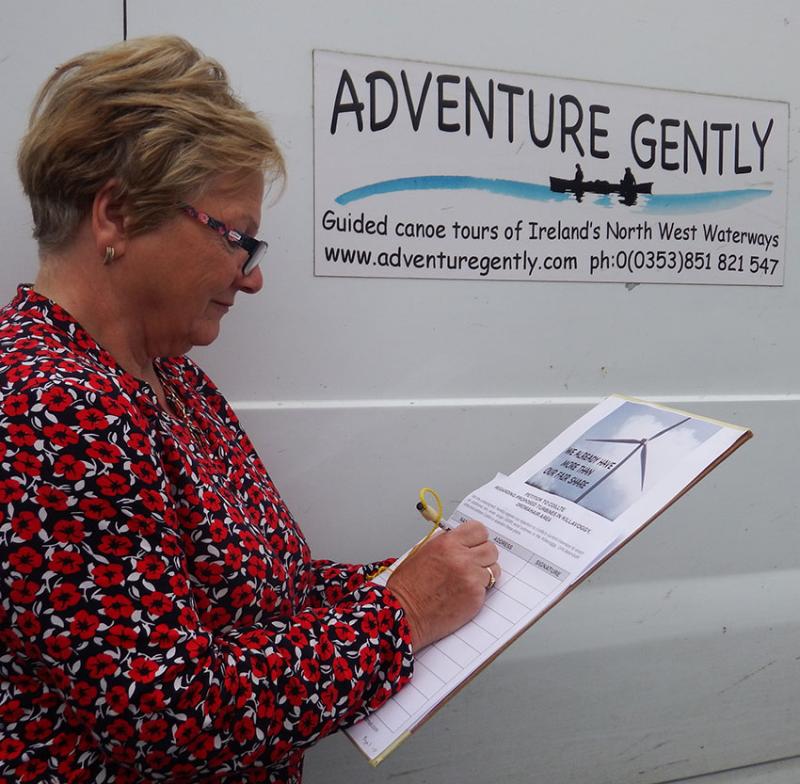 Drumkeerin Councillor Mary Bohan is giving her support to the campaign to petition Cóillte to abandon their plans to erect more, even larger wind turbines in the Killavoggy Dromahair Area.

These proposed turbines will be up to 165 meters, that is 50% larger than the existing turbines in the area which are 100m in height.
Adrienne Diamond who runs Adventure Gently canoe tours with her partner Graham, said families in a 2km radius have been informed by Cóillte that planning permission will be sought next year for ten new wind turbines.
Adrienne told the paper the locals have no issue with wind turbines and already are surrounded by them, with the closest one 780m away but the new structures will be 50% bigger and even 80m closer.

She said they are concerned the turbines which are already quite noisy will cause more noise pollution. She also added that the electricity developed here is not used locally but is going to Dublin.
The local group have started a petition and hope to get Leitrim councillors to support them but also aim to change Leitrim County Council's “open policy” on wind farms. She informed the paper that some counties like Galway only allow 10% of the county to be developed for win farms.
Adrienne believes that more wind turbines will “be detrimental to tourism.” She said visitors to Leitrim want to see the wild, rugged and quiet landscape.

“You can already see turbines from Lough Gill,” she commented.
Already there are a considerable amount of wind farms in the Dromahair Killavoggy area and this new wind farm will extend the Arigna development even further into Dromahair.
The petition is available in Centra Dromahair and Drumkeerin Post Office.