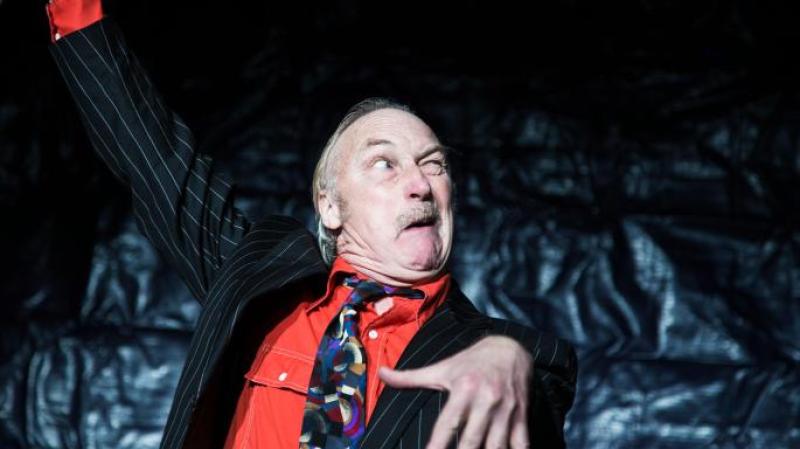 Donal O’ Kelly: Bat the Father, Rabbit the Son comes to The Dock on Wednesday, November 21 ... and we have tickets to give away!

To celebrate 30 years since its premiere, O'Kelly is touring his award-winning play ‘Bat the Father Rabbit the Son’. First presented by Rough Magic for the Dublin Theatre Festival in 1988. Bat has toured to New York, Chicago, London, Edinburgh, Australia and New Zealand.
“I don’t know where Rabbit sprang from. I wrote him as a character based on hundreds I saw in loud pinstripe suits running Dublin in the 80s.
“Thirty years later, I’m doing it all again. And it doesn’t feel like a nostalgia trip. The bank bailout and our deliberate impoverishment as a citizenry is rooted in the mindset of that 80s generation – the sons of the founding fathers of the state.”
It's Dublin in the 1980s. Rabbit is a self-made haulage magnate. But something's wrong. He cuts a deal with his underling Keogh to help him find his lost moorings.
The quest is hampered by his dead father Bat, Citizen Army volunteer and pawn shop assistant, bubbling up.

Donal O’Kelly’s relentlessly engaging script and impressive performance is awash with subtle hints at exposition and backstory amongst Rabbit’s bluster and declaration, while making room for irreverent and mischievous storytelling throughout.
Tickets for this performance are €16 /14 and available now on 0719650828 or at www.thedock.ie

Ticket Giveaway
The Leitrim Observer is delighted and excited to have two tickets up for grabs.
To be in with a chance to win tickets email your answer to the question below to leitrimobservercomp@gmail.com with your name address and phone number. (Entries accepted until Sunday, November 18 at 5pm)
Complete the following slogan of the Irish Citizen Army in 1916: "We Serve Neither King nor Kaiser but _______"