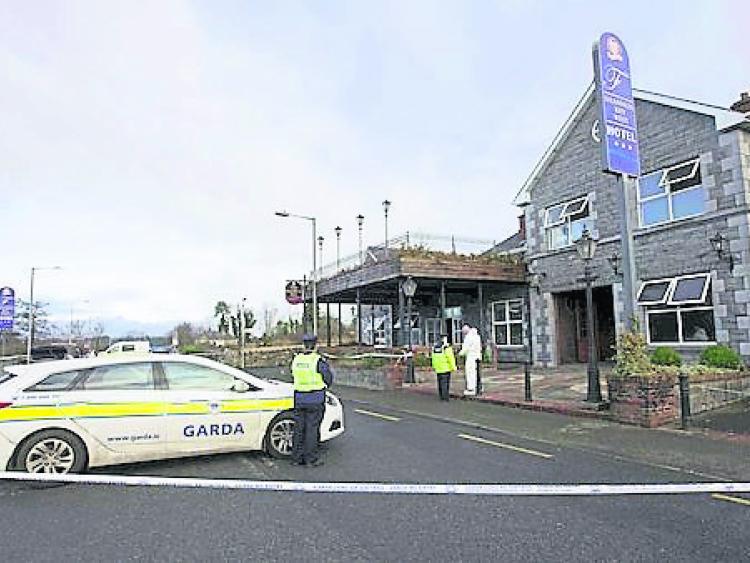 Gardaí outside the Shannon Key West Hotel in Rooskey

The most recent arson attack in Rooskey has been vehemently condemned from all sides with Minister for Justice Charlie Flanagan calling it an “act of hatred.”

Local councillor and Cathaoirleach of Leitrim County Council, Sean McGowan called the attack “horrendous.” He said “the decent law abiding people of Rooskey have no hand in this” and said he felt sorry for the area to have its good name dragged down with this behaviour.

Cllr McGowan said he understood works have taken place on the facility following the previous attack on January 10 but he did not know if a new date for asylum seekers had been finalised.
Mr McGowan said locals are angry and appalled at this violent behaviour. He called on the people behind these attacks to “stop before someone is hurt” and asked for any local information about the attacks to be brought to the attention of the gardai.

Leitrim and Roscommon United Against Racism who held an anti-racism rally after the last arson attack said: “We understand the asylum seekers were due to move into the hotel in the next week or two. “We are shocked and saddened yet again by this incident. We want to send a clear message that the tiny minority of people who were involved in these attacks on the hotel and those who support them by no means reflect the vast majority of the people living in Leitrim or Roscommon.”

Local Deputy Eugene Murphy (FF) stated: “Nobody can tolerate this. I understand that two small fires were discovered by security personnel on the first floor which I understand were brought under control with fire extinguishers on site. It is extremely disturbing to learn that there were a number of security personnel at the location at the time so there could have been serious injury or loss of life.

“It is true to say that a large percentage of people in Rooskey have serious reservations about the hotel being used as a centre for asylum seekers but despite the Government’s lack of engagement on the issue, the local residents do not in any way condone this type of illegal activity and they are outraged by this second fire at the hotel.”

Justice Minister Charlie Flanagan said he is “deeply concerned” about this incident and added the people responsible for this attack “have shown a reckless disregard for the safety of human life and no respect for private property. The owners of the hotel had just completed the necessary repairs to the property from the last fire and the damage will now have to be assessed again for the second time this year.” He concluded: “An act of hatred against the most vulnerable in society is an attack on society itself.” The government said they will work with the community and offer whatever support and reassurances they can.

The Department of Justice did not say whether this most recent attack will affect a move in date for possible asylum seekers.