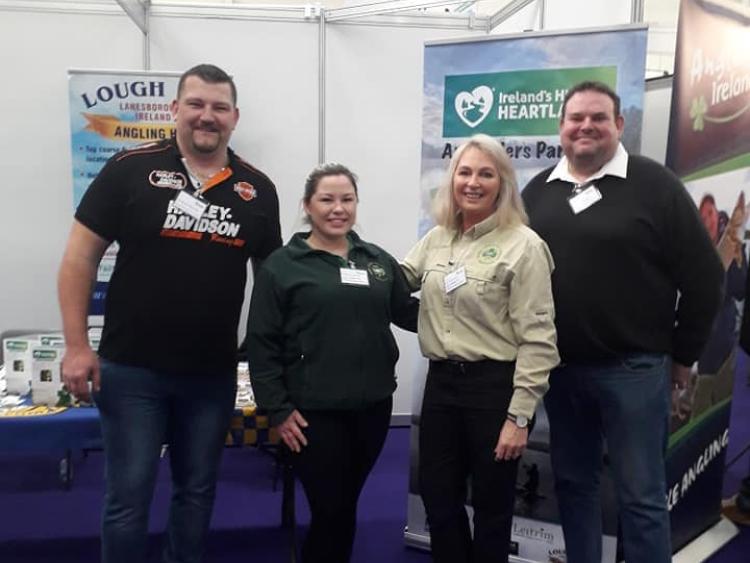 A young fisherman who is one of the most prolific anglers on Leitrim's most popular pike-fishing lakes was part of the Irish tourism team who went to the Northern Angling Show in Manchester last weekend to promote Leitrim angling to over 20,000 UK anglers.

Aaran Carr from the Camlin Angling club has taken part in multiple pike-fishing competitions on the popular lake near Dromod and led a team of four people who met up with the UK anglers at the show on Friday, Saturday and Sunday and distributed over 4,000 new colour brochures on what the county of Leitrim has to offer to the visiting angler.

This promotion was organised by the Lough Ree Angling hub with the support of Leitrim Tourism officer, Sinead McDermott,  the Upper Shannon Erne Future Economy project and Failte Ireland's Development officer Sarah McCarthy who is working with the hub to promote the angling paradise within the new Ireland's Hidden Heartlands Region.

"We got a tremendous reaction from the UK anglers," Philip Gordon, secretary of the angling hub said, "this show was one of the top shows in the world for anglers and we invited hundreds of fishermen and women to come to Cavan and the Hidden Heartlands region to see what we have to offer."

"County Leitrim in Ireland’s Hidden Heartlands has a great array of Waterways from the Atlantic Ocean in the north of the county to its many streams, rivers, canals and lakes in the south" Sinead McDermott says and "the county offers game,  pike and coarse fishing and hosts many match angling competitions.  Leitrim offers a wide choice of accommodation catering for the angler from hotels, B&Bs and self catering,  something to suit all tastes and budgets.  In Leitrim you can be guaranteed good fishing and a warm welcome. "

Aaran Carr said there was a fantastic response to the new colour brochure the hub produced and the Hidden heartlands imagery. "We produced a special slide show and video which was also shown on the stand" Aaran said, "and we are now confident we will see dozens of these anglers coming over to us in the coming years."

Support for attending the show came from Failte Ireland, Leitrim County Council and the Upper Shannon Erne Future Economy Project. This is a partnership project between four local authorities, (Leitrim, Roscommon, Longford and Cavan) ESB, and Bord na Mona and has a number of working groups including Tourism. In recent years the working group has focused on promoting the angling offering of the region.

In March the Lough Ree Angling hub will be teaming up again with the tourism authorities to attend another major show in Farnborough UK where coarse fishing will be the theme.