"I had no understanding what depression and anxiety was. I had a belief you had to toughen up….show no emotion, never cry " - Alan Quinlan 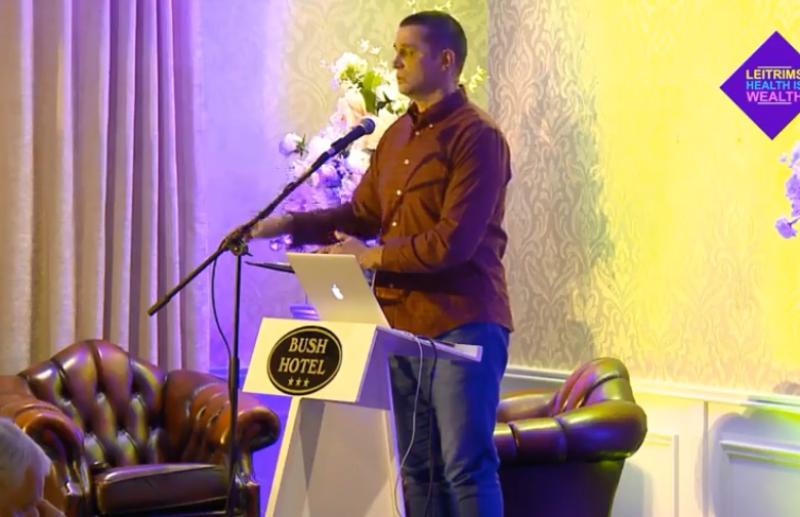 Former Irish Rugby International, Alan Quinlan, has said a lack of understanding and education about mental health issues meant that, when he experienced them himself as a successful young man, "I didn’t really know what to do , I didn’t know who to turn to."

Speaking at Leitrim's Health Is Wealth in Carrick-on-Shannon tonight he said: "I was really, really good at sport….sport was a great distraction for me when I had anxiety, when I felt depressed when I was younger."

However, he said, as he got older he didn't know "how to share (the fact he felt unwell) with someone".

"I had no understanding what depression and anxiety was. I had a belief you had to toughen up….show no emotion, never cry.

“At 22 I went to my doctor… I knocked on his door...and I wasn’t sure what was wrong with me. I was living the dream, I was playing rugby and I just didn’t feel well. I said ‘I think I’m depressed’ and ‘there’s something not right’. He had a quick chat with me and marched me out of the room and he said 'it’s just the blues and everyone get's them'….. and I left thinking I had to toughen up.”

Mr Quinlan said that when he spoke about his struggles with anxiety and depression in his book in 2010, it came as a shock to many people.

“I was living the dream” he said, "and people didn't know I ever felt like that".

He said what is key is giving people hope.

“Sometimes people have really tough lives, they face difficult challenges and…. they have every right to be depressed, to be sad. But what we want to do with that person is to get them to share that sadness and we want to try and find a solution . We want to try and create a tiny bit of hope," he said.

Mr Quinlan said that the words “there is light at the end of a tunnel” is very positive noting “if we can see some sort of light we just naturally move towards it, it’s an instinctual thing”.

He stressed the importance of encouraging people to talk, to try and have conversations which will help break the stigma surrounding mental health.

Referring to a recent study by St Patrick’s Mental Health Hospital in Dublin, Mr Quinlan noted “61% of those of us in this room….believe that having a mental health problem is a sign of failure”.

“It’s alarming really isn’t it. Most of us would probably say I’m not one of that 61%....but that’s in our general society. We’ve got to change that mentality and say it’s not a sign of failure it’s a sign of strength. It’s a sign of courage. It’s a sign of hope, of light, of integrity, of honesty, of passion.

“I’ve had to work very, very hard to try and understand myself better and try to appreciate myself more…” he said.

He encouraged people to get help. To seek help and to talk. Have the conversation. Take off the mask.

"That light is there at the end of the tunnel."