"Never judge a book by its cover. You don’t know what’s going on in anyone’s head" - Mikey Drennan's story of struggling with depression, gambling and isolation.

Football stardom is the dream of so many young boys. For Kilkenny man, Mikey Drennan that dream came with a terrible price. Here is speaks on his experiences to Paul Williams at Leitrim's Health is Wealth 2019. 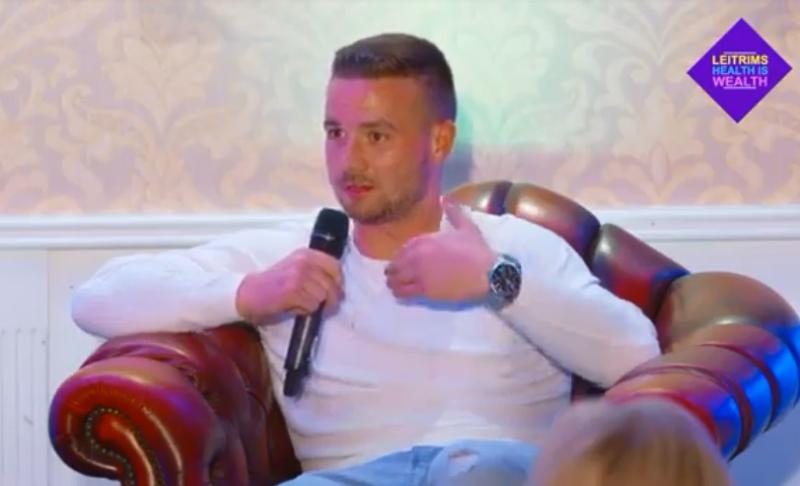 Mikey Drennan shared his struggle with gambling, isolation and depression.

Aged just 16, Mikey Drennan left behind his native Kilkenny to pursue a dream of becoming a star footballer. He seemed well on his way to success, earning a place playing underage for Aston Villa in 2010.

Alone, living in digs with a family he didn't know, Mikey struggled with boredom and loneliness.

"I was meant to be the next big thing.. .I had a lot of things on my plate. I suppose starting in Aston Villa was probably the start of the downhill when I was 16," he candidly admitted.

"I suppose probably the first three years I struggled a lot but when I went onto the football field I forgot about everything and everything was kind of going well for me then.

"I’d go to training. I’d come back from training and go to my room. I used to just lock the door, close across the curtains and just lie in bed, half 12 in the day, sun splitting the stones, and watch telly. That used to be my routine every single day. I didn’t want to go out. I just wanted to be by myself. At that age you don’t know why you’re like that."

Although he was initially on a small wage he said that the day he turned 18 he went to a bookies and placed his first bet.

"The following month I signed a pro-contract. Then Monday to Sunday I was in that bookies. I was betting on horses," he admitted.

Mikey said he knew he had a problem when “about six months before I left to go back home to Ireland. I got paid on a Friday and I lost every single penny that Friday and I had a month to go before I’d get paid again. I rang my mother crying saying ‘If only I could have given that money to you'. I had a car to pay for. I had a loan to pay for. I had visa (bill to pay). I had to pay insurance and I had nothing."

In his time in England he believes he lost over £180,000 but he says there was some solace in the fact that he was still able to play.

However breaking his foot in January 2014 after scoring a goal in the Quarter Final of the Champions League marked a very dramatic turning point in his life and he acknowledges "everything went downhill from there".

My agent  would ring me everyday and I was just crying on the phone to him and he asked me 'are you depressed?' He was the first person to ask me that," recalled Mr Drennan.

His agent told him to come back to Ireland and he returned to play for Shamrock Rovers. Shortly afterwards, he attended his team doctor and was diagnosed with deep depression and put on medication.

"That was the first time. I was going to a doctor in England for five years and he never recognised I was depressed," he said.

But even though he was back home in Ireland he continued to struggle with his mental health.

"I tried to overdose. I was in Dublin. I had my own apartment. It was the worst thing I could do, to get my own place. I was on antidepressants and I started drinking and started to do drugs."

He said his manager eventually came and told him he needed to take a break and readily admits that, if he hadn't taken a break, he "wouldn't be here now".

He also bravely acknowledges that he still struggles to deal with depression.

"I suppose you’re always going to have bad days ….I’m back seeing someone again professionally. I needed to do it. It really opened my eyes. If I don’t look after myself, what can happen," he said.

"I look forward and that’s what people need to do. You need to look forward. Go for a walk."

He has shared his inspiring story so honestly and openly but is amazed at the way his experiences have struck a cord with so many others, all around the world.

"People have sent me texts from America, Australia, NZ saying 'thanks so much you helped me or my son'," he said.

"At the time (I told my story) I just wanted to get it out there. I didn’t want people saying the wrong thing. The reaction (my story) got, I didn’t expect it at all."

He says that if there's one thing he's learned it's "never judge a book by its cover. You don’t know what’s going on in anyone’s head."

He said now he hopes that his story brings hope to others and that by sharing it he can encourage others to seek help too.