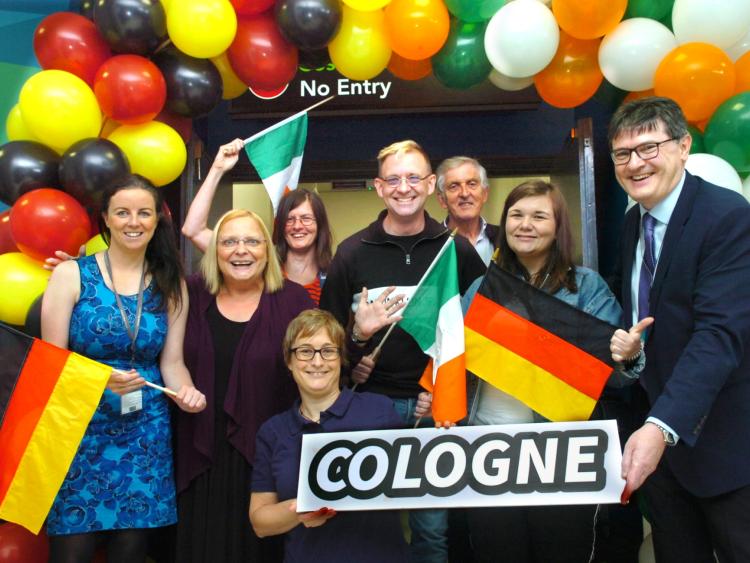 Ireland West Airport were delighted to welcome the first scheduled service from Cologne with Ryanair to the West of Ireland last Saturday, June 1.

Between June and September Ryanair will operate direct flights to and from Cologne every Tuesday and Saturday. Cologne is Germany’s fourth largest city and the largest city of the State of North Rhine–Westphalia.

Centred on the left bank of the Rhine, Cologne is regarded as Germany’s capital of carnivals reflecting the lifestyle of its inhabitants, who make Cologne the incredibly energetic spot that it is.

Cologne is ideally located just an hours train journey from Frankfurt and only 90 minutes from Brussels providing easy onwards travel options for visitors.

This new service is a major boost for tourism in the West and North West regions of Ireland as it provides the only direct access to the West Coast from the North Rhine-Westphalia region.

Germany is the third-largest market for tourism to the island of Ireland with a record year forecasted in 2018 of over 650,000 German visitors with 50% of German holidaymakers visiting the West and North West of Ireland during their stay.

On hand to greet arriving passengers were representatives from the Gourmet Greenway Food Trail who provided samples of delicious locally produced cuisines. The food trail has been devised by the Mulranny Park Hotel, in association with Mayo food producers, to showcase the wonderful artisan food in the vicinities of Mulranny, Newport, Westport and Achill.

Accompanying passengers on the first flight from Cologne were a selection of media representatives from some of Germanys biggest media organisations who will be taking part in a 3 day familiarisation trip around the West and North West of Ireland during their stay.

Speaking at the launch, Joe Gilmore, Managing Director, Ireland West Airport said “We are delighted to welcome the first service from Cologne with Ryanair today. German holidaymakers are Ireland’s most active visitors, exploring our historical sites and engaging in multiple events/activities such as hill walking and hiking while on the island, which ties in perfectly with the airports location as the Western gateway to the Wild Atlantic Way and Ireland’s Hidden Heartlands.

"We thank Ryanair for their continued support and their vote of confidence in the airport and we hope the service will attract the full support of all in the region as it will require even greater effort on all our behalf’s to ensure the route is a success and is maintained for the longer term and can lead to further expansion into Germany and beyond in the coming years’.

Eimear Ryan, Sales and Marketing Executive, Ryanair, added “We’re pleased to officially launch our new twice weekly service from Ireland West Airport Knock to Cologne. To celebrate the start of this new route, we are releasing seats on sale from just €19.99 for travel in June and July, which are only available for booking on the Ryanair.com website until midnight Thursday (6 June). Since these amazing low prices will be snapped up quickly, customers should log onto www.ryanair.com now and avoid missing out.”

Welcoming the first German visitors to touch down off the flight last Saturday, Michael Ring, Minister for Rural & Community Development said, "Today brings more good news for Irish tourism as we welcome German visitors to the West of Ireland with Ryanair on their first flight from Cologne. Germany is the third-largest market for tourism to Ireland with over 300,000 Germans visiting the West and North West of the country annually.

"This new direct service will provide a major tourism boost for the region as it brings visitors to the heart of the Wild Atlantic Way and Ireland’s Hidden Heartlands. For regional Ireland, the importance of convenient, direct, non-stop flights cannot be overstated – they are absolutely critical to achieving growth in inbound tourism for rural Ireland."