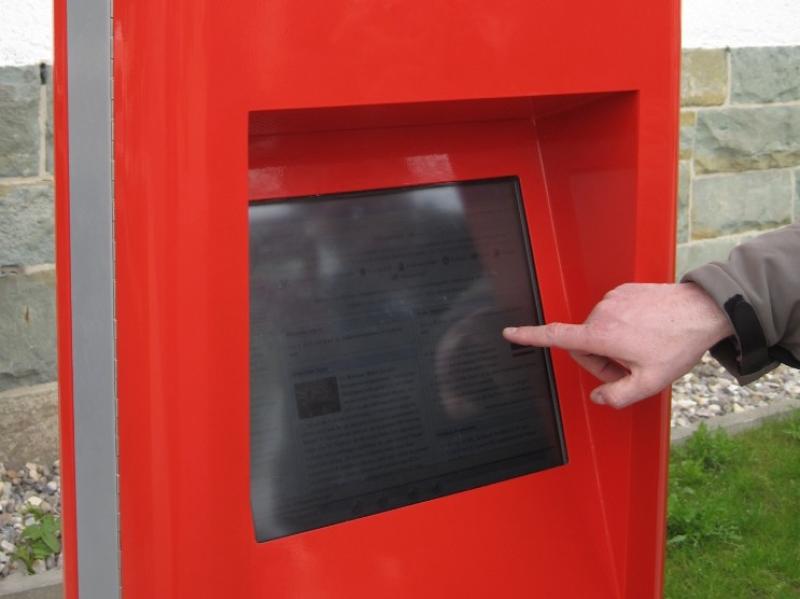 An example of a tourist information touch screen.

A spokesperson for Leitrim County Council has confirmed that they are removing obsolete tourist information touch screens at a number of key tourism locations.
These units will not be replaced because there is no funding available to do so.
Cllr Sean McDermott raised he issue at the July meeting of the municipal district requesting that new information touch screens be installed in towns and villages in North Leitrim or at tourist attractions.
He noted there had previously been screens in a number of towns and villages but these were “taken away some years ago”.
However the council noted there is no funding available in the current budget for the installation of new or replacement electronic tourism information screens.
“Furthermore, there are ongoing expenses associated with these as they also required an annual maintenance budget which can be costly as regular exercise software upgrades are also required,” it was noted.
The council also noted these machines were only effective “if they are operating in real time  which requires 24/7 wifi”, something  many parts of Leitrim simply do not have.
Accepting that the replacement and maintenance of these  tourist information screens is an issue, Cllr McDermott pointed out “we're losing out on tourist opportunities here, this should be revisited”.
“In our tourist locations it is very important to send a message out about what Leitrim has to offer.”
Director of service, Mary Quinn, noted that this “has to be looked at in terms of technology”.
“A lot of people already have access to smart phones,” she noted, but she agreed to revisit the matter with the tourist office.