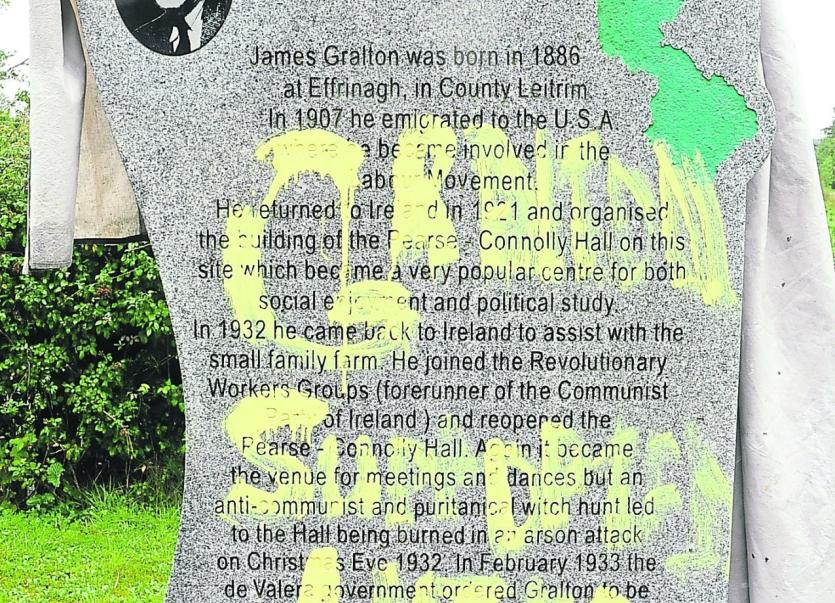 Leitrim Gardai are investigating criminal damage to the Jimmy Gralton monument in Effrinagh at the weekend.

Gardai said they understand the damage occurred between 2am and 12 mid day on Sunday, September 1.
Gardai outlined the monument was “defaced with yellow paint and offensive words were written over it.”

There are CCTV cameras at the monument but the wires were cut by the perpetrators. Gardai are making an appeal to locals that heard anything suspicious or anyone who knows any information to inform gardai.

The spokesperson also informed the paper while there have been other incidences at the monument in the past, this is the first report of graffiti at the site

Chairperson of the committee over the monument, Sligo Cllr Declan Bree, told the paper: “This outrageous act of vandalism clearly confirms that there are still people in Ireland who share the right-wing and reactionary views of those who persecuted Jimmy Gralton in the 1930s.
“Back then they were powerful and had the support of church and state. They used every possible mechanism to intimidate Gralton and his comrades, they burned down his hall and eventually ensured that he was deported from his native land. It was a very dark period in Irish and European history.
“I am very much aware that people from the local community in Effrinagh are most upset with the attack on the monument. The people of Effrinagh, Leitrim and Ireland have every reason to be proud of Jimmy Gralton. He has left us a wonderful legacy and I know that today the great majority of decent people will abhor this disgusting and cowardly attack on the monument,” concluded Cllr Bree.
The monument was unveiled three years ago by President Michael D Higgins, who offered a public apology to Jimmy Gralton and his family.

The Communist Party of Ireland has described the defacing of the monument as an outrage and has condemned the incident.
This year marked the 86th anniversary of Jimmy Gralton's deportation.