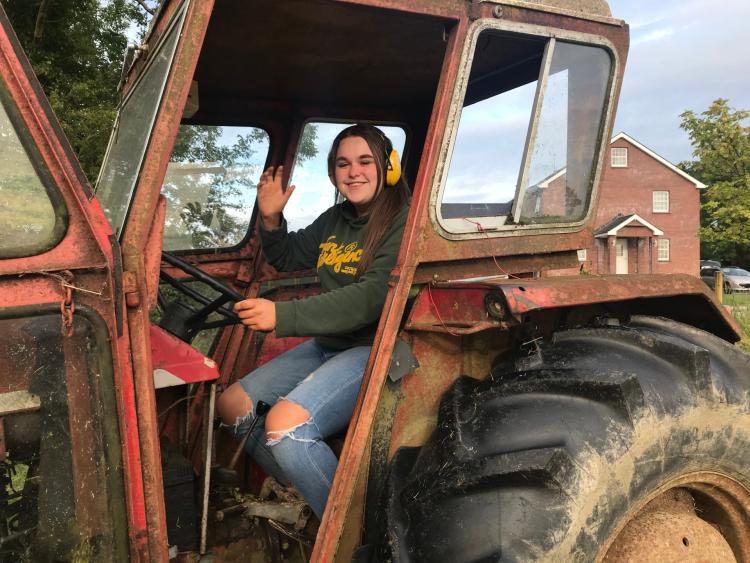 Carly on Donal and Collen Quinn's farm in Aughawillan

Donal and Colleen Quinn from Aughawillan gave Dundalk's Carly a taste of farming life and art during her stay in the family home.
Carly seemed quite moved by the work of Drumsna's Meals on Wheels. Drumsna Community Centre Manager Lorraine Mulvey brought Carly to the home of Mary Ellen Ginty and Roseleen McNabola and showed the importance of the volunteer run service.

In Ballinamore John and Amanda O'Connell gave Dublin's Adam quite the wake up call and “a reason to get up in the morning” while staying on their dairy farm. Adam got to help out at Carrigallen mart and at Ballinamore Family Festival. While Adam didn't quite take to his assigned activities, the TV series did emphasise the importance of helping your community and finishing a task.

John O'Connell also showcased Ballinamore's new fire station on the show.
The show got a great reaction locally and nationally.
Ann Marie Torsney said on Facebook “The two Families that hosted were brilliant and did a great job with the two teenagers and didn't Leitrim look wonderful.”

John McManus called it a “Brilliant programme Congrats to both the Quinn & O'Connell families and everybody involved.”
Ballinamore Community School gave a shout out to their student involved in the show.
Declan Donohoe said on twitter: “Every child/teenager should spend a summer on the farm or in the bog in Leitrim. Well done to @katherinelyncho and all involved in the production. Wonderfully positive show. Up Leitrim #raisedbythevillage”
While Aine O'Neill said she “spat out her tae when John O'Connell said ‘The only screen time he’ll get is looking through the screen of a John Deere tractor.”

The aerial shots of Ballinamore and its hinterland advertised the area as a beautiful location to visit. Mohill's Katherine Lynch is involved in Wakka TV the production company behind the TV series which visited Carrigallen last year.
The show continues this Sunday night on RTE One at 6.30pm.

You can catch up on the episode on the RTE Player.