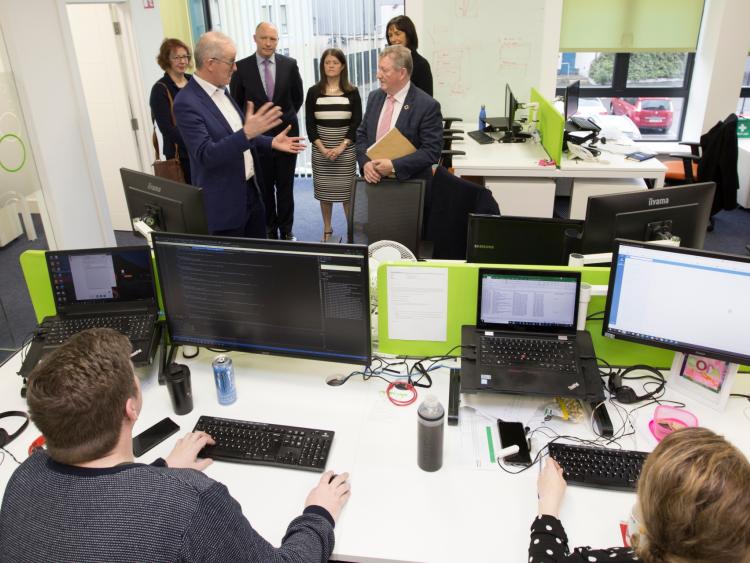 The Western Development Commission today celebrated 15 years of investment in global software company Cora Systems, who are based in Carrick on Shannon, Co. Leitrim.
The WDC Investment Fund has to date invested over €55 million in 166 SMEs, Micro and Social/Community Enterprises in the region with over 5,000 people employed directly and indirectly in portfolio companies.
Since its foundation in 1999, Cora Systems, a leading provider of enterprise project and portfolio management solutions, has grown from its base in Co Leitrim to become the largest indigenous software company operating in the northwest of Ireland with over 80 staff and regional offices in Dublin, Bedford (UK) and Arlington (VA).
As a global software solutions provider, its client roster includes some of the leading brands in the world, such as City of London, Elanco, Honeywell Building Solutions and WSP in addition to powering the largest transformation program in the history of the Irish state at the Health Service Executive.
Cora Systems has won several recent international awards for its software. Earlier this month the company won a prestigious PMI award in the UK for its work in orchestrating NHS Digital’s £1.3 billion Global Digital Exemplar (GDE) programme so that a range of NHS Trusts across the UK can more effectively manage and spend their yearly budgets.
CEO of The Western Development Commission Tomás Ó Síocháin said’ 'Cora Systems has seen significant recent growth, but it is the culmination of a long journey for CEO Philip Martin. It illustrates the value of the WDC support over an extended period of time. This is reflected in our aim, over the next year, to put long term supports in place in one or two sectors, to ensure similar success stories, job creation and growth in the region in the long term.’
Philip Martin, CEO, Cora Systems, said: “Without a doubt, our business has hugely benefited from the WDC investment we received back in 2004. What’s even better is the money we’ve paid back will be available to reinvest in other fantastic projects in the region, repeating the successful investment cycle.” On visiting the Cora Systems office in Carrick on Shannon, Minister Seán Canney commented; “Cora Systems are accessing global markets from their base in Carrick on Shannon. The extent to which indigenous businesses can become world players is where the opportunity lies, and Cora Systems are a fine example of how that potential can be realised. I acknowledge the support of the Western Development Commission and Enterprise Ireland in supporting our Global Ambition. As Chair of the Atlantic Economic Corridor Taskforce, I want to congratulate Cora Systems on their achievement to date. The AEC region is well positioned to develop opportunities and increase sustainable jobs in the regions.”
Due to the success of its Evergreen Strategy the Western Development Commission now has significant funds to reinvest in enterprises in the Western Region. Recent investments/lending include Atrian Medical in Galway, Lough Gill Brewery in Sligo and Cerebreon Technologies in Donegal.