Ballinamore prepares to welcome seven new families to the town 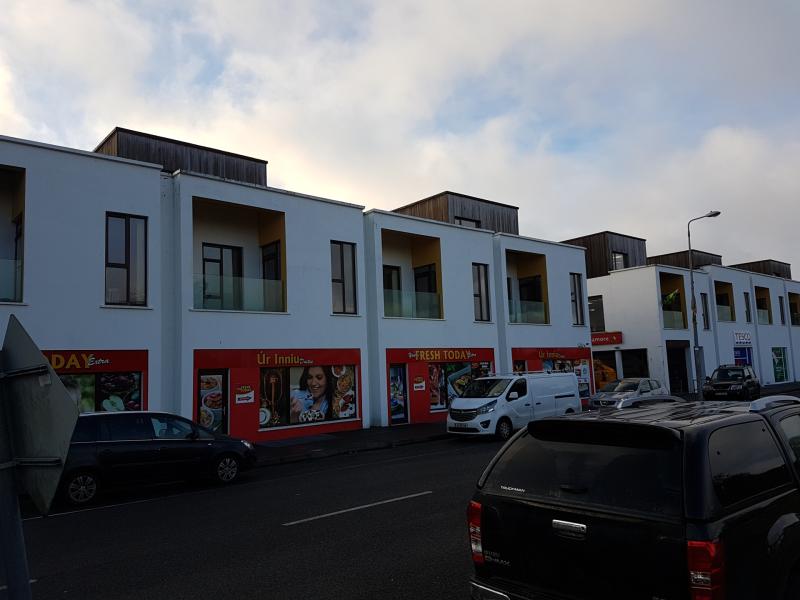 The community of Ballinamore has “positively” welcomed the announcement that 14 adults and 13 children will move into their new homes at The Rock Quarter before Christmas.

More families may arrive to the renovated apartments above Tesco and Fresh Today in the new year but there will be consultation with the communitywith regard to this.
Spokesperson for the Ballinamore Community Group, Gordon Hughes, explained a meeting was held by the group before Minister Stanton announced this news last Thursday.

He understood that everyone involved in the protest “were overwhelmingly in favour” of the news and welcomed the progress made.
Mr Hughes admitted: “it had not been easy” to try and negotiate with the Department of Justice when a contract was already signed for the accommodation but after a three hour discussion that involved officials from a number of departments and Minister David Stanton last Wednesday, they all “reached an agreement.”
He explained that a liaison committee will be established locally who will work with the department and discuss the integration of the new families and partake in ongoing talks in 2020.

While it is possible that more asylum seeking families will be moved into the 25 apartments at The Rock in 2020, Mr Hughes said nothing will be done “without prior agreement and consultation” with the local liaison committee.
Mr Hughes said the feedback in the town to the news has been positive and “this was the best possible conclusion.”
He said the town will open it’s arms and welcome the new residents and are delighted that families will be taken out of emergency accomodation and re-homed in Ballinamore before Christmas.

The origin of the families is still unknown, along with what languages they speak or level of supports they will need. Officials have been in contact with the local primary school and other services are being procured for the asylum seekers. Mr Hughes understands many of the children will be aged between 7-12 years.

While Minister Stanton did turn down the Ballinamore Community Groups’ alternative accommodation plan to use houses spread out around the town to accommodate families, Gordon Hughes insisted “the minister gave it considerable thought” and told them it was not suitable for “right now.”
Plans are underway to welcome the new families when they arrive and to assist them as they settle into their new homes before Christmas.

Deputy Martin Kenny welcomed the news of new families arriving and said “we need to make a success of this and work together to welcome these new people with compassion.”
He added “It is regrettable the way things played out over the past few weeks but we need to move on and put it all behind us.”
He said he believes the local services “will meet the challenge” and he looks forward to meeting the new people and helping them settle in.

Fine Gael Senator Frank Feighan also welcomed “the reaching of a ”workable resolution in relation to the issue of asylum-seekers coming to Ballinamore.”
He stated: “I am very pleased an agreement has been reached and it was very informative to be involved in the constructive engagement on this sensitive issue.
“From the outset, community representatives have shown calmness in dealing with this process. This has always been about proportional provision and I am glad that it has been at the heart of the engagement process.
“I also want to commend the work of my colleague, Minister Stanton who has carefully listened and engaged with the community of Ballinamore.”
“My engagement with the Minister on this issue has been very positive and productive and it is clear that he has taken on board the legitimate concerns of the community.
“The engagement process continues in relation to this issue and I know that Minister Stanton will continue to work together with all of us in a very constructive fashion.”

Also read: Injunction hearing on Ballinamore protest to be heard on December 6