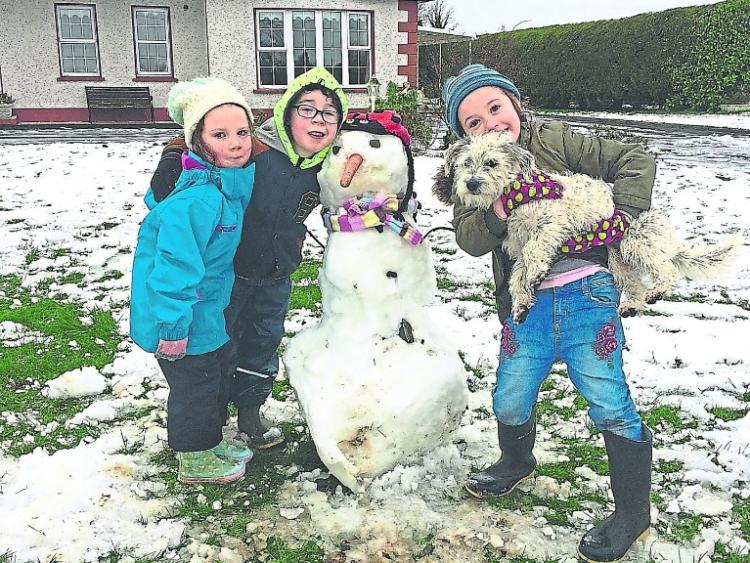 Winter arrived with a bang with heavy snowfalls in early February. Pictured here are Róise and Eoin McNulty with Fiona McNabola and Holly the dog enjoying a day off school in Eslinbridge

Wednesday, February 6, saw the launch of a new-look Leitrim Observer with a definitive new style, dedicated sections for News, Community News, Lifestyle and Sport to name a few.
The re-launch of the paper was very positively received and the modern style and layout proved a hit with loyal readers.
The lead story in that week's paper was that Leitrim's 18 county councillors cost the taxpayers more than €520,000 for the year 2017 and showed a rise of €35,000 on the previous year's figure.
There was shock in political circles with the announcement by Cllr John McCartin that he would not be seeking re-election to Leitrim County Council in the local elections.
The Newtowngore based businessman served for 10 years on the local authority and had sought a nomination to contest the general election on behalf of Fine Gael.
Nurses in the county took to the pickets lines twice in the space of a week calling for a pay increase of about 12% as well as more staff recruitment. The INMO blamed the strike on the inability of the HSE to recruit and retain nurses due to poor working conditions.
This month saw a second arson attack on the former Shannon Key West Hotel in Rooskey with the Justice Minister, Charlie Flanagan calling it an “act of hatred.”
There was widespread condemnation of the arson attack which again drew negative national attention to the county.
Leitrim County Council in conjunction with Comhairle na nÓg Liatroma won the National Impact Award with the 'Use Your Brain Not Your Fist' campaign which reflects the dire consequences of momentary senseless madness as a result of alcohol and substance abuse.
Leitrim became the focus of much political attention this month with the visits of no less than four government ministers and the Taoiseach to the county.
Minister Shane Ross was in Glenfarne where he met with DUP leader Arlene Foster to open a 2km demonstration stretch of the 74km SLNCR greenway project running from Sligo through to Enniskillen along the old railway line.
Ministers Heather Humphreys, Paschal Donohoe and Joe McHugh were in The Food Hub in Drumshanbo to launch the government's new regional enterprise plan 2020.
The Taoiseach stopped off in Carrick-on-Shannon to meet and greet members of the public.
Acclaimed Irish traditional musician Ben Lennon from Kiltyclogher won the title of' Leitrim's All Time Great' following a hugely popular online poll conducted by the Leitrim Observer.