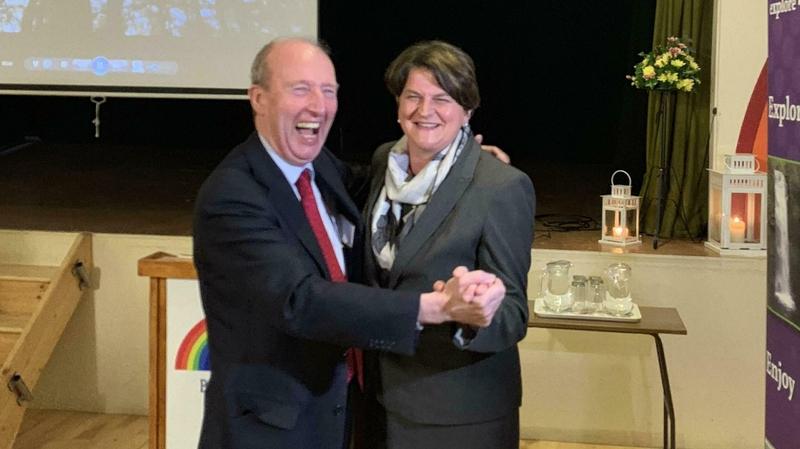 The controversial DUP leader spoke about her friendship and work with Leitrim and how she feels this will continue post-Brexit. She noted the inclusion of the SLNCR greenway in the Stormont deal which includes commitments from UK and Irish government.

Manorhamilton Cllr Felim Gurn welcomed her comments and said “Arlene Foster sees the potential of this for the border.” He said she has worked with the committee since her appearance in Glenfarne 12 months ago.
Cllr Gurn revealed he and Cllr Sean McDermott will be seeking another meeting with Ms Foster this month to speak with her about opening the new 5km demonstration stretch in Manorhamilton.

He said “with job losses expected along the border due to Brexit, the greenway is seen as an economic driver for rural areas and the towns of Sligo and Enniskillen.
“We can’t sit now, it is time to keep it moving.”
He confirmed the application has been submitted by Leitrim County Council to get the SLNCR “shovel ready.”
The 72km stretch from Collooney, through Leitrim, West Cavan and into Enniskillen is expected to cost €35m.
Cllr Gurn said as time moves on the cost “keeps creeping up.” He said they hope to get the project moved on in the next five years.

From Manorhamilton to Blacklion 72 out of 74 landowners have consented to allow the greenway. There are a few issues along the Colloney to Dromahair route. Cllr Gurn said engagement with farmers is important and their concerns are legitimate. He said Leitrim is starting to become a “topic of conversation.”
Arlene Foster spoke of her connection to Leitrim, whil ehost Tommy Tiernan and Joe Brolley talked about Leitrim last week. “People are discovering the county and we need to build on that, we need this greenway so show there is something to see between Glencar waterfall and Marble Arch Caves,” concluded Cllr Gurn.

Also read: Leitrim jobs roundup - who is hiring this week?