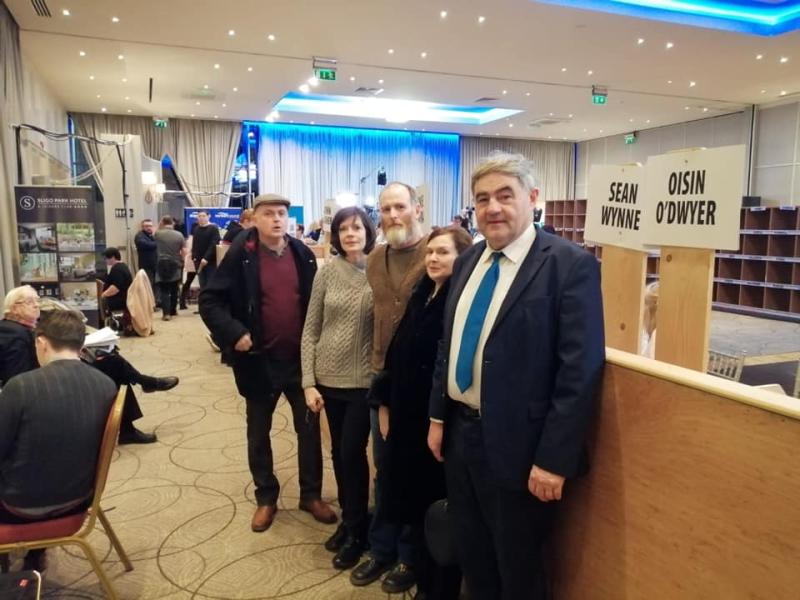 Sean Wynne at the election count in Sligo with his team

“Pity there wasn’t more Drumshanbos” laughed Sean Wynne as he conceded his numbers didn’t add up and he failed to get his word out further than his home base.

Sean Wynne received an astounding vote in Drumshanbo  and did well across Leitrim holding on until the ninth count to be eliminated.

He thanked all his family and supporters who came out  at short notice to canvas and campaign for him, he acknowledged the size of the constituency was “daunting” given the short period of time.

The Drumshanbo teacher said the issues he highlighted such as the lack of policy for forestry, the issue of one-off houses (which he hopes Martin Kenny will solve) and the promotion of community banking will be brought forward by those elected.

Sean Wynne said he received a very positive reaction on the door steps: “I thought I would top the poll to be honest from the reaction!” His campaign was summed up by three words: Nationalism, Family and  Pro-Life and he said that did resonate with local people. He acknowledged that he “may have lost votes” because of his views but on a one to one he said many people held similar convictions but are “intimidated to come out and make public declarations.”

Keep up to date with our live blog