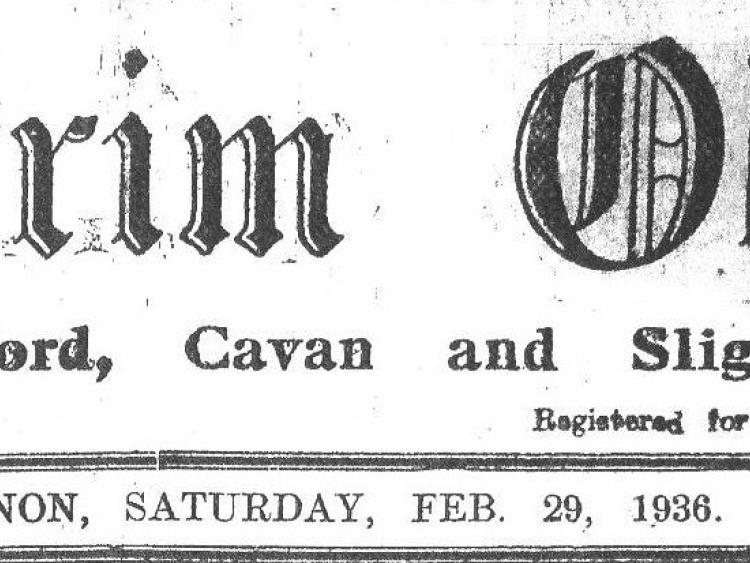 The Library service across the nation is hosting a National Library Open Day on leap day Saturday, February 29.
There are many myths associated with leap day but staff at the Local Studies Department at Ballinamore Library will be dealing only with facts.
The chosen theme for the open day is ‘Leap in to Leitrim Observer’. On the day, the Library will showcase all the bound volumes of the Leitrim Observer for leap years 1980 to 2016. There will be an opportunity to get a demonstration of how to access Leitrim Observer Online 1904 to present on www.irishnews
archive.com.
This is a subscription payment site but searching and browsing is free once patrons are accessing it through one of the Leitrim Libraries.
The earlier copies of the newspaper are all on microfilm commencing from 1904. Mary Conefrey, Assistant Librarian, in Local Studies has established that since 1904, there have only been two issues of Leitrim Observer dated Saturday, February 29, which were 1936 and 1964. Both of these issues will be on view to the visiting public on Saturday, February 29 between 10am and 4pm. She has highlighted some interesting articles they contain:-

Saturday 29.02.1936
An advertisement for Anderson’s of Mohill, who were holding a ‘great dispersal sale’ having disposed of their business. Readers are advised that ‘there is a big collection of bargains, which you cannot afford to miss’. Among the goods on offer were wallpaper, press beds, prams, wicker chairs, china and 20 Raleigh bicycles which the advert noted were ‘selling at a sacrifice’.
Applications for the position of Inspectors in connection with the Warble Fly (treatment of cattle) Order 1936 were being sought for many districts throughout the county. Successful applicants in each district could expect to earn £2 per week. Applications were being processed by Leitrim County Council and the advert drew a ‘remarkable and instantaneous response’.
There was a report on a concert held in St Clare’s Hall, Manorhamilton under the patronage of the Right Rev Mgr Soden. ‘The proceeds were in aid of school repairs in the parish and the spacious hall was filled to its utmost capacity’. Among the performers were the Catholic Boy Scouts and Mrs MacSwiney of the Munster and Leinster Bank plus a host of other performers were listed.
Leitrim County Committee of Agriculture were offering scholarships for girls to various Rural Domestic Economy Colleges and boys to one of the Departments Provincial Agricultural Schools. They had to be the son or daughter ‘of a bona-fide farmer whose P.L. valuation does not exceed £20’ and one had to apply to the Committee Secretary Mr PJ McGreevy.
The Dublin Broadcasting Radio Programme was scheduled for the week and one could expect to hear news and gramophone concerts on a daily basis, sports talk on a Sunday and the close of programme at 11pm each evening by the National Anthem.

Saturday 29.02.1964
The front page featured a photograph of the ‘grand opening’ of Flynn’s Supermarket, Carrick-on-Shannon. Customers were invited to ‘pay a visit and enjoy shopping the modern way’. There were ‘amazing bargains waiting for you and there was free balloons for all children’.
Throughout the month of March, a ‘Mass Radiography unit was visiting towns and villages such as Drumsna, Keshcarrigan, Rossan, Drumeela, Eslin and many more.' 'Members of the public over 12 years can have an X-Ray’ and ‘the service is free and confidential, with no undressing’.
Carrigallen was hosting ‘one of the best boxing tournaments ever held in the West of Ireland’.
The tournament included bouts by Junior Champions, heavy weights and cruiserweights and among the contestants was a J Boyle, Mohill. Admission to the tournament was 6 shillings.
‘Jailhouse Rock’ was on in the Gaiety Cinema, Carrick-on-Shannon and Elvis Presley was described as being ‘at his best in a big, tough, dramatic singing and fighting role’.
At the Ritz Cinema, Mohill, there was a screening of ‘The Sundowners’ in colour starring Robert Mitchum.
Among the advertisements were Kieran’s Travel Bureau in Ballinamore which had ‘excursion rates available to see New York in spring’.
Also in Ballinamore, James Duignan’s General Draper and Outfitters had a two week sale and potential customers were reminded that ‘all of our general drapery is of high grade quality and you can shop with confidence’.
One must now wonder, eighty four years later, who would have bought one of Anderson’s Raleigh bicycles or what boy or girl were lucky enough to avail of a college scholarship in 1936. Or indeed what child might have got a balloon from Flynn’s Supermarket or who might have booked a flight to New York at Kieran’s Travel, fifty six years ago in 1964.
Why not take a trip down memory lane and accept the invitation to drop in to the Local Studies Department at Ballinamore Library on leap day, Saturday, February 29 between 10am and 4pm, where you can explore more of the Leitrim Observer Archives.
You will be warmly welcomed.