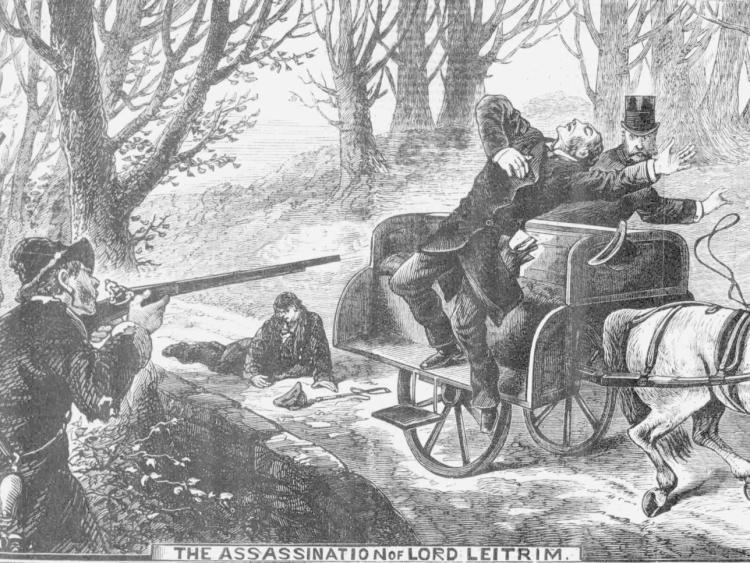 The assassination of Lord Leitrim, Illustrated Police News, 13 April 1878 © The British Library Board. All rights reserved

150 years ago, Ireland had emerged from the Great Famine and was the seventh richest country in the world.
Mohill in Co. Leitrim was thriving and confidence amongst tenant farmers and landholders was growing.

In 1878, at 72 years of age, William Sydney Clements, 3rd Earl of Leitrim, was still physically strong and very much in charge of the management of his estates.  From the end of the 1860s, he spent most of his time in Donegal in an effort to quell local resistance to his increasingly harsh and wholesale evictions.

Escalating resistance
The locals had seen some success in forcing Lord Leitrim to turn empty farms into pasture, since few new tenants would take on an evicted farm.
But there was increasing anger about the increasing scale and severity of the clearances. In March 1876, there was outrage over a series of evictions during a particularly cold spell.
A Presbyterian widow named Algoe was evicted with her six young children, together with three cottier families, apparently because they had cut some trees. Three days later, six more were evicted, allegedly for gathering seaweed or cutting turf.
Their dwellings were levelled by up to twenty bailiffs protected by twenty armed police. One newspaper reported how ‘old and infirm persons, women and children, were put out in the snow on the mountain side, absolutely without shelter’.
Things continued to escalate, and in early 1878 there were reports that eighty evictions were planned in the Fanad area.
By then, the earl was a ‘marked man’ and he had taken to travelling heavily armed and with a strong escort.

Ambushed
On the morning of Tuesday, April 2, 1878, he set out from his house at Manorvaughn, timed to arrive at Milford by nine o’clock. There were two carriages: the first was the Milford Hotel coach carrying Lord Leitrim, the Court Clerk, John Makim, and a young coachman, Charles Buchanan; the second car held Lord Leitrim’s coachman and valet (and probable son), William Kincaid, and Michael Logue, the owner and driver of the car. In truth the party had left an hour early, which may explain the absence of his normal police escort. It was said later that the clocks in Manorvaughn had been deliberately set back.
The morning was cold with driving sleet and a biting wind. By the time the party reached Woodquarter near Cratlagh Wood, the carriages had slowed to take a steep hill. Lord Leitrim’s car went ahead, while Logue and Kincaid’s car trudged some two hundred meters behind.
Waiting patiently at the scene were two local men, Michael McElwee and Neil Sheils. They had taken their position at seven o’clock and lay in wait for Lord Leitrim’s party.
Another man, Michael Heraghty, had arrived with them but had left the scene (and his gun) to ensure that a passing pedestrian didn’t warn the authorities of their presence. McElwee and Sheils remained, and awaited their target. 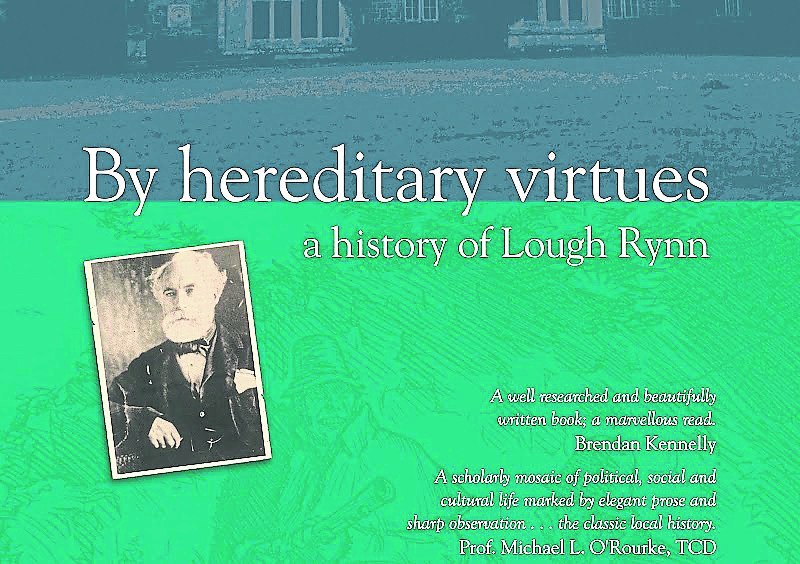 The shooting
The first volley of shots hit the coachman, Charles Buchanan, in the head. He died immediately, falling to the road, his rug still around his knees. John Makim, the clerk, was also shot in the head but managed to stumble back towards the second car. He died later.
Lord Leitrim never got to either of the two weapons he had with him. One of the first shots hit him in the right arm, fracturing his elbow, and he took nine or ten bullets in the back of his left shoulder. The horses panicked, throwing the earl to the ground.
McElwee and Shiels approached, but the earl managed to get to his feet and wrestle with the two men. When he was found later, he was still clutching a portion of a red beard which could only have belonged to McElwee.
The struggle was short, and ended when Shiels struck Lord Leitrim with the gun in a blow that was violent enough to split the gunstock.
The earl fell face down in a pool of water at the side of the road. His new hat was found nearby, unsoiled and unbattered.
His black bag, full of money and containing his fine revolver, was left intact and recovered later.
The entire episode lasted some ten minutes.

Little doubt among the tenantry about who the actual assassins were
Shiels and McElwee ran the seventy paces to the shores of Mulroy Bay to a waiting boat, and Kincaid watched from the second car as they rowed hurriedly from the shore and crossed the bay. Kincaid then drove on to Milford and alerted the police.
There was little doubt among the tenantry about who the actual assassins were, but no one informed the authorities. Immediately after the murder, each of the conspirators went back about their daily business.
McElwee was to be seen soon afterwards constructing lobster pots and Shiels went back to his tailor shop. Heraghty went to the house of some friends where he had a meal of tea and eggs.
In the end, Heraghty was the only one to be arrested: the broken gunstock was the only usable evidence and its ownership was traced to Heraghty. He appeared at Lifford Assizes on 19 July 1878.
He was described as being about twenty years of age, small and wiry with black hair, light grey eyes and a low forehead.
On the day of his trial, he was ‘sallow and ill-looking’. He died in gaol three months later from typhus and without being convicted of the crime.
Of the three men ultimately attributed with Lord Leitrim’s murder, two died before they could come to trial; the third, McElwee, was never apprehended and continued his career as a travelling tailor until his death in 1921.

About the author:
Fiona Slevin grew up and went to school in Mohill and currently lives in Dublin.
She recently published a new, expanded edition of her book, ‘By Hereditary Virtues: A history of Lough Rynn’, described by Brendan Kennelly as ‘a well-researched and beautifully written book; a marvellous read’, and by Prof Michael L O'Rourke, TCD as ‘the classic local history’. It is available at www.loughrynn.net