The Connaught Rangers and the Indian Mutiny 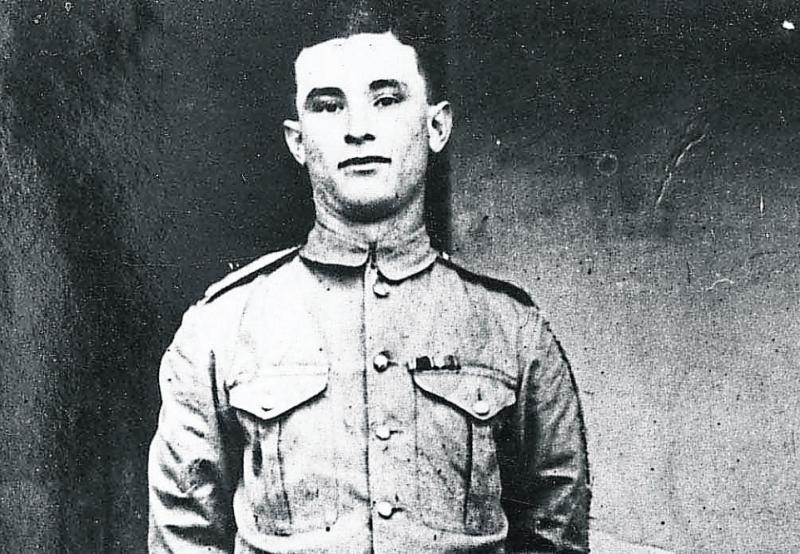 Private James Daly who was executed for his role in the mutiny.

The year 2020 is of particular significance to the Connaught Rangers Association.

It is, of course, the centenary of the infamous mutiny in India when members of the regiment, outraged at the news of Black and Tan atrocities at home, grounded their arms and refused to continue to serve until all British troops were withdrawn from Ireland.

The narrative surrounding this seminal event is familiar to all who share an interest in the Rangers: the spread of the protest from Jullundur to Solon; the soldiers’ attempts to retrieve the weapons they had so willingly surrendered earlier that day; the tragic loss of two of their comrades when challenged by the camp guard in the process of doing so; and the subsequent arrests and courts martial which resulted in the summary execution of Pte James Daly and the incarceration of so many others.

All this is embedded in the national consciousness and rightly serves to unite successive generations of Irishmen and Irishwomen in sympathy with the plight of these brave young sons of Ireland.

The historiography surrounding the mutiny, however, and the prevailing tendency to view it as an act of political redemption, demands reflection during the current Decade of Centenary Commemorations. And here, in this reflection, we engage in our greatest challenge to situate the event in Ireland’s historic struggle for independence.

Witness statements in the Bureau of Military History, the repatriation of the mutineers bodies to Ireland, a stirring memorial erected at Glasnevin cemetery, and the presence of IRA firing parties at their subsequent re-interment, tends to portray these particular Rangers as modern-day republican icons. And for many their actions in the Punjab qualify them as such.

Enough evidence is available, however, to challenge this perception. Avoiding worn-out charges of revisionism, it is incumbent upon the present committee to at least consider this evidence when attempting to commemorate the centenary with due diligence. 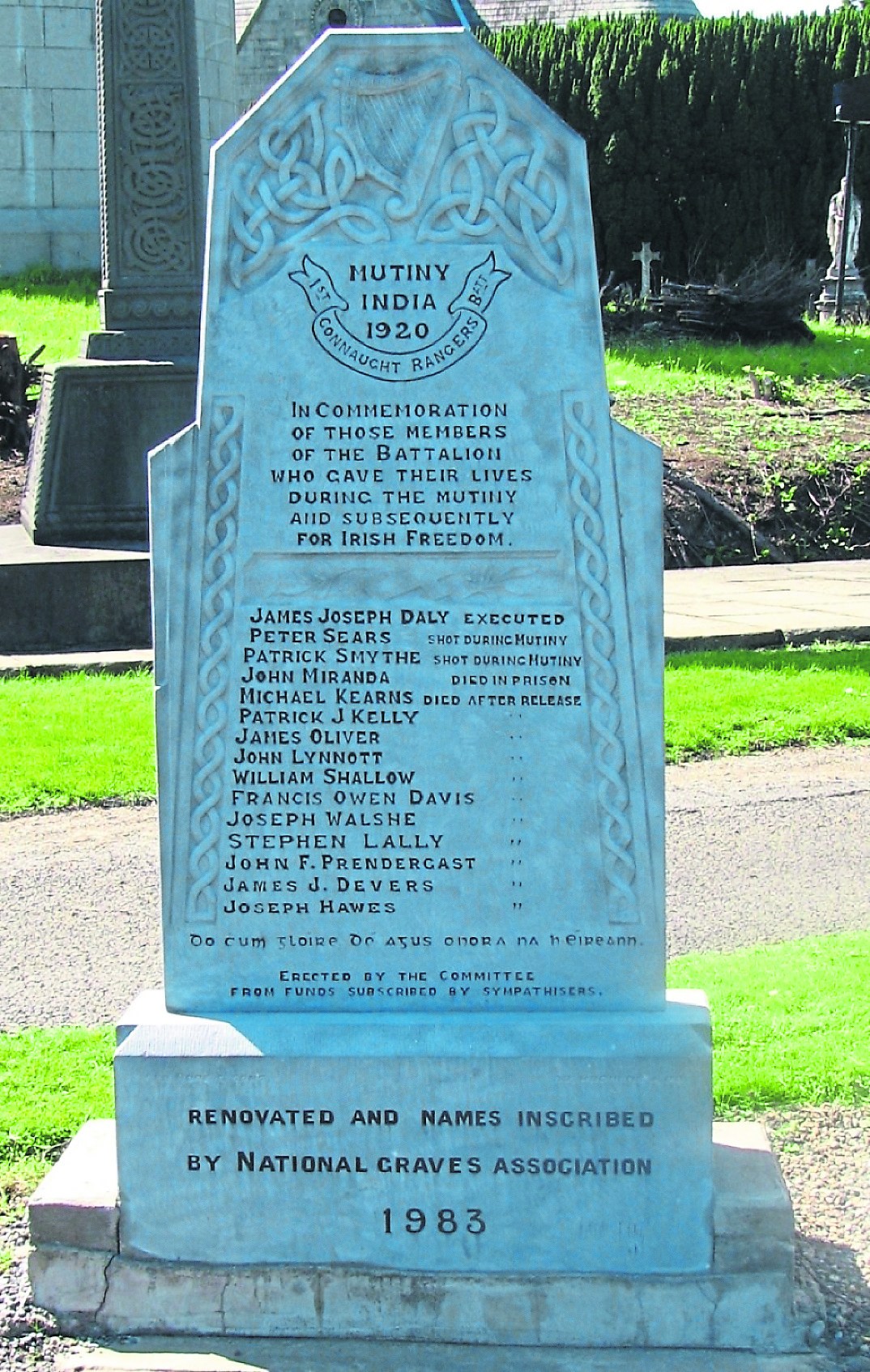 The memorial to the mutineers in Glasnevin Cemetery, Dublin

A public talk by Dr Tony King, Liaison Officer with the Connaught Rangers Association Committee, originally scheduled for April, will now be delivered once Covid 19 restrictions enable larger public gatherings. Details will be published when a venue and date have been decided on.

In the interim, the committee would like to publicly acknowledge the selfless sacrifice of the mutineers in question on the centenary (June 28, 2020) of their heroic stand.

l N.B. The Connaught Rangers Association is under new administration and the Committee extends an open invitation to any member of the public who would like to join with us in keeping the memory of this famous regiment alive.
Interested parties should contact P.J. Maloney, Chairman of the C.R.A. at chairman@ connaughtrangersassoc.com

Further information on the Connaught Rangers is available to view on the association website www.connaught rangersassoc.com

LEITRIM MEN INCLUDED AMONG THE MUTINEERS IN INDIA

He writes:
On June 28, 1920, a detachment of the Connaught Rangers, then part of the British Army and based in India, decided to revolt due to the atrocities being committed in Ireland by the Black and Tans.
When the mutiny was quelled, 14 men were sentenced to death with a further 51 given terms of imprisonment.

In the end, only one was executed and the remainder were held, much of the time in England, until the new Free State secured their release in January 1923.

Four Leitrim men were involved: Charlie Kerrigan from Glencar, Patrick and John Kelly from Drumkeerin, and Francis Moran from Keshcarrigan.

Charlie Kerrigan was from Tawnymachugh in the parish of Killasnet. He attended Diffreen National School and had a brother, Tom, who was killed in the First World War.

He joined the Connaught Rangers in 1919 and spent time in Dover in England and from there he was sent to India.

The mutiny began on June 28, 1920 and was suppressed within days. In an appalling reaction to the mutiny, several of those involved were sentenced to death.

All were quickly commuted to life in prison, or lesser sentences, apart from James Joseph Daly from Tyrellspass, Co Westmeath who was executed.

Charlie was sent back from India after six months to serve his sentence in Maidstone Prison in England. Here he spent two years until all were released after the Treaty.

When Charlie was released he came back to Dublin and was met there by James N Dolan TD from Manorhamilton. Dolan bought him his breakfast and gave him £1. Charlie got the train to Sligo and started walking home to Glencar.
He later married Florence Fallon and they had 14 children.

Charlie Kerrigan, who took a brave stand along with his comrades in 1920, was the last of the mutineers to die on August 10, 1991 and is buried in Killenora Cemetery, Glencar.

Patrick and John Kelly from Drumkeerin also took part in the mutiny. Patrick Kelly died in poverty in the County Home in Manorhamilton in late 1929. He never received a British Army pension because he had been sentenced to 12 years for taking part in the mutiny. John went to England later.

Francis Joseph Moran from Pruglish, Keshcarrigan joined the British Army on September 30, 1919.
He was stationed in India and joined the mutiny at Solon in June 1920.

He was found guilty of “treason” by the British and sentenced to 10 years.

He spent six months in Dagshai Prison in India and, like his fellow mutineers, he was transferred to an English jail and served a further two years there.
Francis returned to live at Pruglish where he married and raised a family.

Apart from a gratuity paid to him in 1937, he never received a pension from the Irish Government and he wasn't entitled to a British Army pension because of the mutiny.