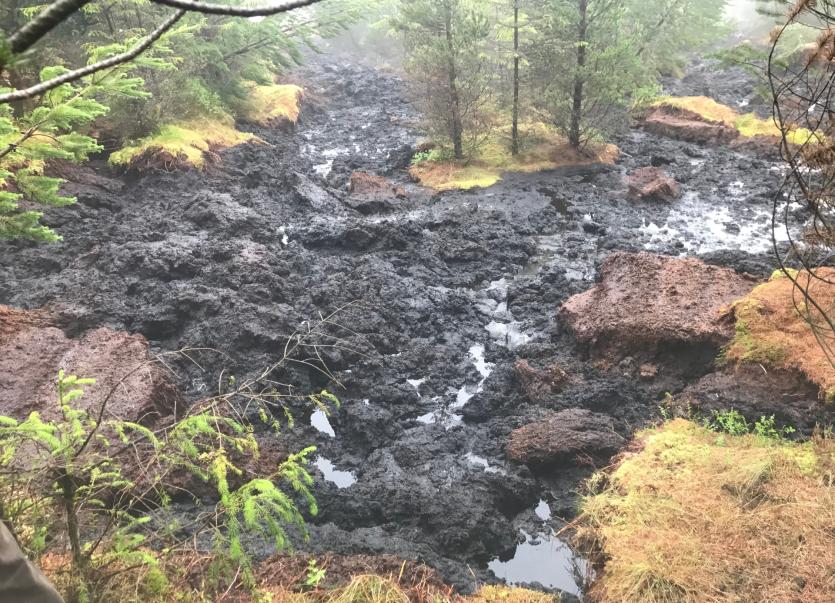 The delegation called to the McVeigh and O’Donnell homesteads in Corkhill and Drumbrahade which were in the path of the landslide. They then travelled to where the landslide started in forestry at the top of Shass Mountain.

In assessing the damage caused by the landslide and where it now stands, local farmers outlined to the INHFA President, how there is still ongoing movement and the fear is that more rain could accelerate this, especially out of the afforested area at the top of the mountain.

Slippage from this area they maintain has been very obvious especially in the last two days.

Addressing the gathering of farmers whose lands have been affected by the landslide the INHFA President called on Barry Cowen, Minister for Agriculture and the Marine “to ensure the landside is treated as force majeure i.e. a natural and unavoidable catastrophe and thus ensure that it does not affect farmers annual payments.”

O’Donnell also called on the Government “to begin remedial works as soon as conditions allow and ensure that affected farmers are fully compensated for any loss suffered.”

Remarking on the natural beauty of the area, some of which is a Special area of Conservation, and on the nearby tracts of coniferous forestry, O’Donnell said “the blame for disasters like this landslide lay at the door of the local authorities who gave planning permission for afforestation of bogland and at the door of successive governments for grant aiding these afforestation practices.”

Calling on Pippa Hackett, Minister of State for Land Use and Biodiversity to immediately suspend the Afforestation Scheme pending a full review, the farm leader explained “that the scheme allows exchequer funds to be grant-aided to non-farmers to afforest farmland.  Many of these non-farmers are rich pension funds, most of whom are non-Irish, and indeed non-European, so little or no benefit accrues to the Irish economy.”

In concluding, O’Donnell emphasised how the continued funding through the public purse of the afforestation programme is nothing short of economic treason and must be ended immediately which will benefit the state and local communities.