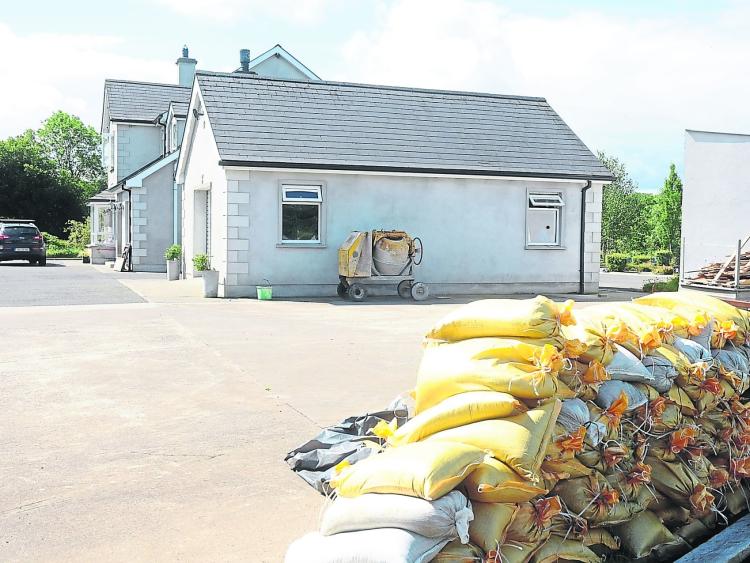 Sandbags have been used to protect houses from flooding.

Leitrim County Council is presently engaged in discussions with the Office of Public Works following recent flooding events in North Leitrim.
Several motions highlighting ongoing flooding of the Bonet River and its tributaries in North Leitrim, were raised at this week’s Manorhamilton municipal district meeting.
Cllr Padraig Fallon said the fact that three separate motions have been raised on the situation emphasised the “seriousness of the situation for all of us in North Leitrim”.
He asked that flood relief and drainage works be carried out on the river noting that there has been “significant and serious” flooding in the area over a number of years.
“It is one thing to have land flooding, but it is another to have water going into a family home,” he added, stating that more engagement with the OPW is needed to address this “ongoing problem” and work on “pinch points” in the River Bonet is crucial.

Cllr Felim Gurn agreed, pointing out that flooding has increased over the last few years in areas such as Soxline, Sranacrannaghy, Corusconny, Drumlease and at the DARC development Astro turf/playground.
“This flooding is no longer a 1 in 10 year event. Housing and properties in these areas have been flooded and work needs to be completed by the OPW on the River Bonet immediately,” he observed.
“What we are now seeing is a month’s worth of rain falling in just two days and this is happening more and more often.”
He said farmers have suffered as well with one person having to sell cattle because he has been unable to provide feed for his animals because of flooding on his land.
“There hasn’t been work done on the River Bonet for a number of years and you also have to bear in mind that once flooded, property owners cannot get insurance again. This isn’t going away. With climate change this will get worse and worse. We need money to be put in place now.”
Cllr Mary Bohan put forward a proposal calling for the Council to seek an urgent meeting with representatives of the OPW to find a solution to this problem noting that she had recently visited a home which was severely flooded and this situation was causing “a great deal of distress”.
“What I’m asking for is an urgent meeting with the OPW for us as public representatives. It is of the utmost importance that the OPW take responsibility with the River Bonet as there is no guarantee that this flooding we have seen recently will not happen again and again,” she said pointing out the most recent flooding event also threatened a nursing home and a pub/restaurant.
The remaining councillors all added their support to the three motions noting that more needed to be done to protect the local community from further flooding events.
Responding Leitrim County Council said that officials have met with the Office of Public Works (OPW) regarding the most recent flooding even in the area and said they are in discussions about the possibility of funding minor flood relief schemes in this area.
“We are currently assessing the properties at risk and will be making an application to the OPW for funding which will include (an application) for a study to assess all options,” noted the Council.
It was also noted that the River Bonet “is within an Arterial Drainage scheme and the management of this river is the responsibility of the OPW.”