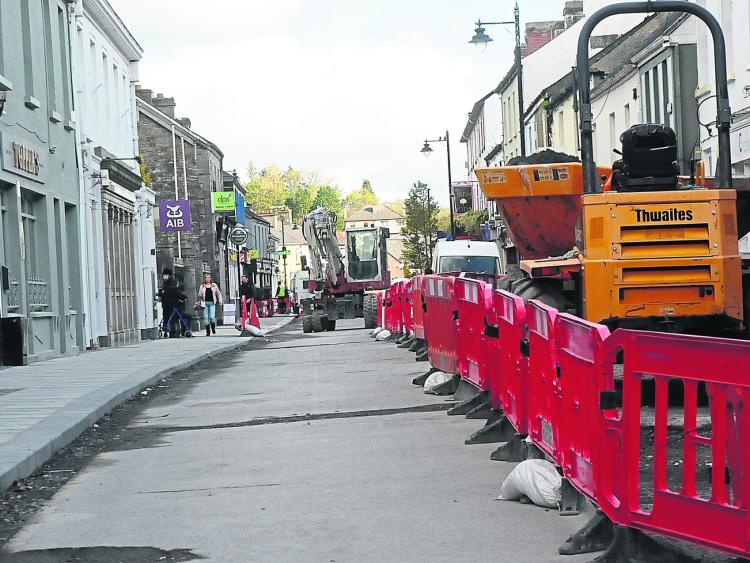 The Council heard this week that business people in Carrick-on-Shannon are “near tears” and the residents are “livid” over the massive delay with the Public Realm works on the Main Street.

The Council have outlined that the entire project will not be completed until July 2021. Works on all of Main Street are expected to be finished by April along with works on St George's Terrace including the junction at the clock. The Dublin Road, Leitrim Road and Priests Lane area should be done and dusted by July.

Cllr Des Guckian had scathing criticism of the council and the contractors, and he sought compensation for all the businesses affected by the delays.
Director of Services Joseph Gilhooly said “This council is disappointed and concerned by the contractors unacceptable delays in the work to date on the upgrade of the streets as part of the Carrick-on-Shannon Public Realm works. We have been in constant discussion with the contractor regarding these delays. We have now reached agreement on a new completion programme for the works. The contractor has agreed to provide adequate resources to achieve this programme.” He also noted that the council have to work within the contract. He said there are no provisions for compensation for businesses.

Senior Engineer Shay O’Connor further explained that the contractor said works were more difficult than expected and there was an issue with the supply of materials.
The materials being used are specialised and with quarries closed during lock down there was backlog with the supply. He said all of this has been rectified.
He noted that this week four gangs of men are working simultaneously and progress has improved.
Mr O’Connor called the delays “disgraceful” and said they have been in contact with businesses and following consultations it has been decided that Main Street will open to traffic from the end of November. He said the “delays are behind us and the contractors know that penalties will incur if project dates are not met.”

Cllr Des Guckian said the answer to his motion is the “equivalent of telling me to 'F' off.”
He told the council to mix with the businesses and people to feel their “vexation, annoyance and terror.”
He commented “the people in Carrick are livid” and may “withdraw all co-operation.”

Cllr Finola Armstrong McGuire owner of The Magnet on Main Street, said “businesses are annoyed, we have displayed our annoyance” but she said they have been given answers and commend the work now happening.
She asked the council to keep the work and communication going.

Cllr Enda Stenson asked if the council could meet with the Chamber of Commerce, so everyone is on the same hymn sheet.
He said, “We have to create a positive image of the town.”
Speaking about a meeting held on the street on October 2 with some businesses, council engineers and the contractor he pointed out elected representatives were not informed of the meeting and not all businesses in Carrick were invited.
Cllr Guckian said there “have been too many meetings between officials and chamber which did not include those affected by the works.”

Shay O’Connor said they felt it was best to hold the meeting on the street due to Covid-19 restrictions, he said at that meeting it became apparent that “not all traders are represented by the Chamber of Commerce.”