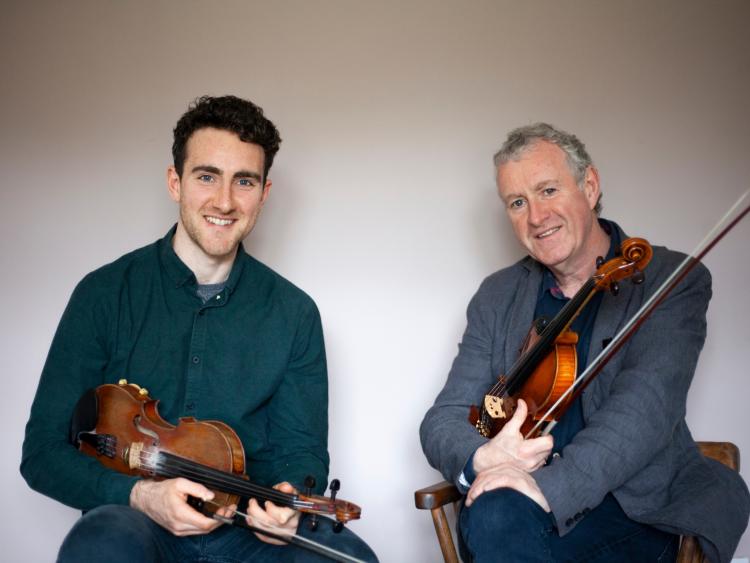 Racket Records in collaboration with the Dock Arts Centre are delighted to announce the online launch concert of The Wavy Bow Collection CD from Boyle based father and son duo, John & James Carty, on Thursday December 17 at 8pm.

Joined by Michael McCague on bouzouki and guitar and Matt Griffin on guitar, the concert will be streamed from The Dock Arts Centre, Carrick-on Shannon and can be viewed online at  https://www.thelockinn.io/wavybowcollection. The concert is a free event with the support of the Arts Council of Ireland. CDs can be purchased on the night following the provided links.

John Carty needs no introduction in Irish traditional music circles. He received the TG4 Gradam Ceoil award in 2003 and has released numerous solo and collaborative albums on fiddle, banjo and tenor guitar. His son, James since releasing his solo fiddle album Hiding Daylight in Dark Corners in 2017 has been steadily building a noteworthy reputation within the genre.

John and James have been musical partners since James was born. They have been playing and listening to music together for a couple of decades during which time James has developed a voice similar to John’s but very much his own. The result of this long-standing partnership has manifested itself in this exciting debut collaboration which explores duet fiddle and other instrumental combinations.

The material is gathered from various sources from obscure recordings of the Sligo fiddle and flute tabernacle to the music of various influential and creative friends whether it be their own compositions or rekindled time honoured favourites.

The melodies are complimented by carefully chosen accompaniment with Shane McGowan, Michael McCague, Jonas Fromseier, Brian McGrath, Matt Griffin, Michael McGoldrick and James Blennerhasset all featuring. There is also a guest appearance from John’s brother James on flute. Together they have woven this tapestry of different styles and instrumentation into a recording with an identity of its own.