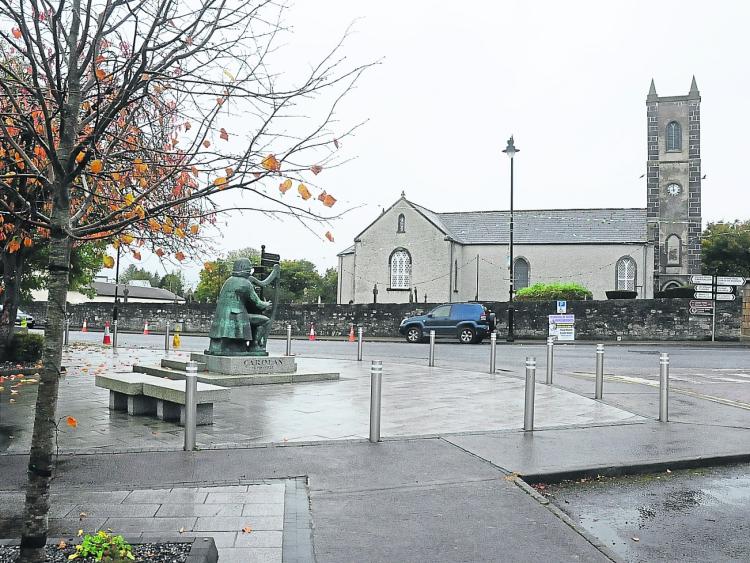 St Mary's Church built on a sixth century monastic site, opposite the statue to Turlough O'Carolan in the historic town of Mohill

Fiona Slevin in consultation with Mohill Historical Society made a lengthy submission about the inclusion of Mohill’s history and heritage in the new Public Realm Plans.

In the submission the society calls for signposts to signal Mohill through 15 centuries and a heritage and interactive pavement.
Mohill’s story starts with the establishment of a monastery c500 by St Manchán, a major figure of monastic Ireland.
535-6: Mohill is first in Ireland to record the Justinian Plague, evidenced by the names of three townlands: Tamlaght More, Tamlaght Beg, and Tamlaghtavally.

The first major settlement by Conmaicne Réin lasted nearly 1,000 years until the 1600s. This unbroken experience of Gaelic life differentiated Mohill from the many parts of Ireland that experienced Viking invasion and Norman occupation.

1430: Brian, the son of Tiernan Óg O'Rourke, is slain by the sons of Melaghlin Mac Rannall at Mohill; the priory provided refuge for Donough Mac Tiernan.
The Gaelic lordships disappeared with the Plantation of Leitrim in 1620.
Manor of Mohill created. Henry Crofton acquired lands in and around Mohill between 1612-21.
1643: Eoghan Roe O’Neill attempts to reverse the Plantation of Ulster. He camps and trains his army ’on the plains of Mohill’.

1720: Turlough O'Carolan, last of the Irish Bards. His family lived in Mohill while he travelled across Ireland with his harp.
1749: Nathaniel Clements buys 10,000 acres in the area, initiating a divisive and tyrannical episode of landlordism. The Clements later become Earls of Leitrim.
1750: The Castle is built as the home of the Croftons, owners of Mohill.

1815: St Mary's church is built on the site of the old monastery and priory.
1844: First Mohill Agricultural Show held.
1847: Famine - one-seventh of the town’s population receive relief.
1856: Slater's Directory describes Mohill as 'one of the most stirring, and is certainly the most thriving town of any in the surrounding counties.'
1860: Reynolds’ American Bar is built, part of a post-Famine boom when the town expanded and businesses thrived.
1887: The first train through Mohill travels from Dromod to Belturbet on a track behind the Courthouse. It closed in 1959.
1893: The Hunt Memorial Parochial Hall is built; now used as a primary school.