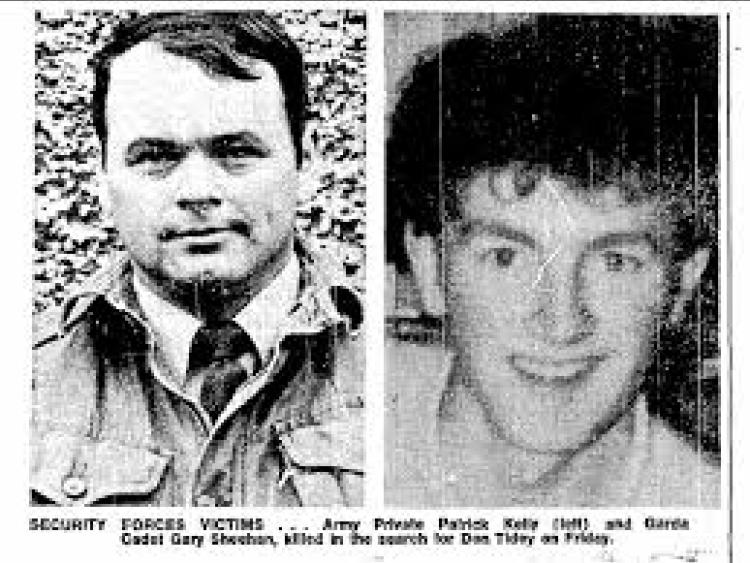 The two victims at Deradda Woods

This week marked the 37th anniversary of the killing of trainee Garda Gary Sheean and Priave Patrick Kelly in Deradda Woods, Co Leitrim.

Fianna Fáil Senator Robbie Gallagher said the families of both men "are entitled to the truth."

Speaking in the Seanad on Thursday, December 17 he said, "This week marks the 37th anniversary of the murders of trainee garda Gary Sheehan and Private Patrick Kelly. They were both killed by the Provisional IRA in Derrada Woods in County Leitrim in 1983 while trying to rescue the businessman Mr. Don Tidey. There was no justification for the murder of these two young innocent men or, indeed, for the kidnapping of Mr. Don Tidey.

"Their families have never received justice. The truth of what happened that dreadful day has never been told. Gary Sheehan was training to be a garda in Templemore at the time. He was 23 years old and from Carrickmacross, County Monaghan. He was an ordinary young man who played football with his local GAA club, Carrickmacross Emmets. He left a heartbroken mother, father, two sisters and a brother.

"Last week, this House correctly supported calls for a public inquiry into the murder of Mr. Pat Finucane. Personally, I was delighted to support that. However, all families, including those of Gary Sheehan and Patrick Kelly, are entitled to the truth. As these families face into another Christmas without their innocent loved ones, I appeal to all those who are in a position to help these broken families find the truth to do so. The families have waited long enough."

Fine Gael's Senator Regina Doherty said she concurred Senator Gallagher's request. She commented "It is a terrible shame that there are so many families in the same situation as the Sheehan and Kelly families." She said she will convey the Senator's request to Taouseach Micheál Martin.