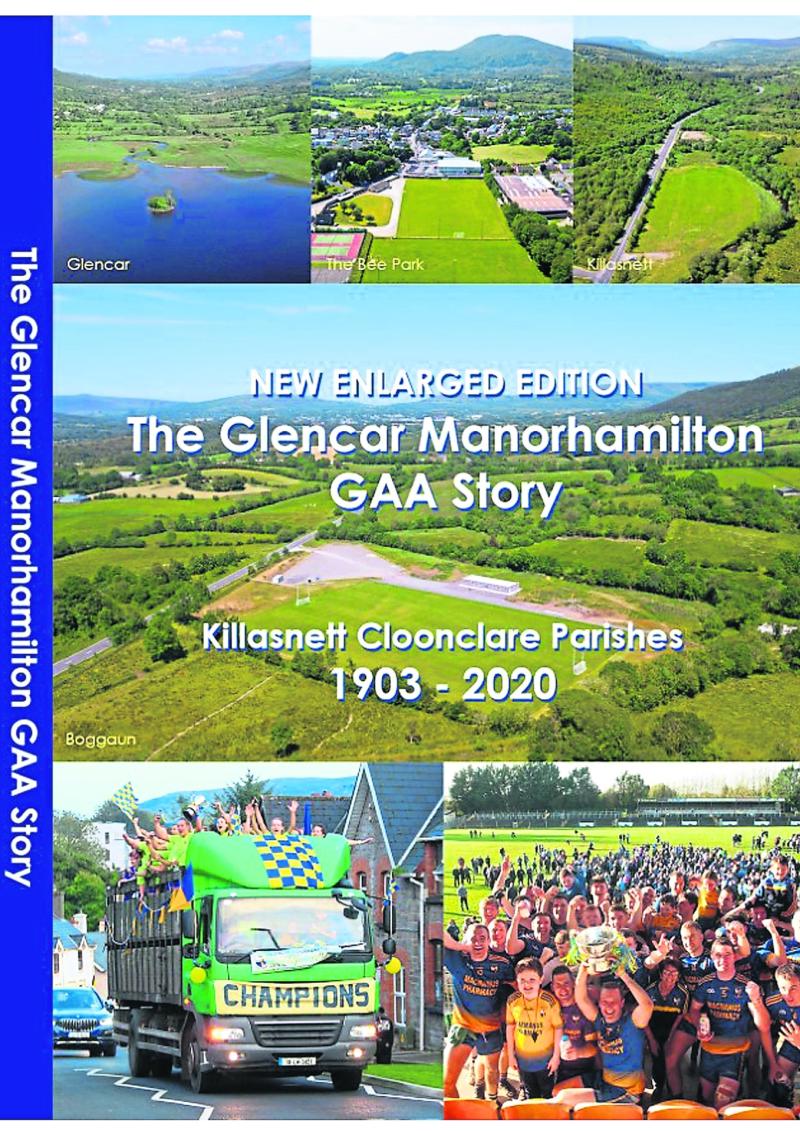 A fabulous and brand-new enlarged edition of the Glencar/Manorhamilton GAA Story, which has just been printed, is now on sale in Manorhamilton.

This is a general and social history of the GAA locally, including Ladies Football, from 1903 to 2020 covering the Manorhamilton, Glencar, Lurganboy, and Mullies which is the current Glencar Manorhamilton Club catchment area.

The new enlarged edition covers an additional two years which includes the golden jubilee year celebrations, the official opening of the new Boggaun pitch and facilities, the winning of the Senior Championship for the seventh time and the Ladies Senior team’s winning the championship for the first time in 2020.

The book has new stories and is populated with many photographs capturing the sporting achievements, plus the enjoyment and participation of the community over the years.

Hurling was the first Gaelic sport played in the area when a team called Manorhamilton Shamrocks was formed in December 1903.  They won the senior County Championship in 1906 but this cannot be verified. Over the next thirty years there are only a few records of hurling been played. From the mid to late 1930s and the 1950s there was a very good Manorhamilton hurling team.

Hurling petered out after this and it was in the early 2000s before hurling was re-established and has gone from strength to strength. It was the Manorhamilton Shamrocks Hurling Club that proposed the forming of a Gaelic football club in May 1905, called the O’Rourke’s Gaelic Football Club.

The first reported Gaelic football game was played under the Shamrocks Club name in January 1908 against Ballintogher in the Bee Park. There are few records of football been played during the World War I, the 1916 Rising and its turbulent aftermath.

In the mid-1920s there was a renewed effort to revive football.  The Seán McDermott’s Gaelic Football Club in Manorhamilton was officially set up under the auspices of the GAA at a meeting held on April 20, 1932 in McGloin’s Hall. The forming of the North Leitrim Board the same year heralded the commencement of club football GAA rules competitions in North Leitrim.

The Lundon Cup competition which commenced in 1933 made a huge contribution to the promotion and development of Gaelic football in the Northern half of the County. P.J. Lundon, a Tipperary native donated the cup to the North Leitrim Board.

The Sean McDermott’s Club was in existence until 1964 but didn’t affiliate a team that year. Glencar formed a Club in 1964 and competed in Leitrim at Junior level for five years.

On the December 28, 1968 at a meeting held in St. Clare’s National School, Manorhamilton, agreement was reached between those present from the Glencar Club and the old Sean McDermott’s Club to amalgamate and form a new Club called St. Patricks, Glencar – Manorhamilton GAA Club. This far-reaching decision has left a very important legacy to the people of the area.

The Club is now over fifty years in existence and is one of the premier clubs in the county, not alone on the playing fields but through its phenomenal success in Scór. This history was first considered at the AGM on December 16, 1983 for the GAA Centenary year.

In 1990 another effort was made and this time a number of people commenced researching the history, and this culminated in the shooting of a four-hour video history with Paul Brady and Thady McTernan doing the interviews. Johnny Keaveney and the late Pat O’Callaghan called a meeting for October 2, 2014 in the Bee Park Community Centre with a view to forming a history Committee, thirty-one years after the first consideration of a history book.

A further meeting was convened on the October 9, where Pat O’Callaghan presented a proposal which has formed the basis of what should be covered in the book. The Committee was dealt a serious blow on November 12, 2015 with the sudden death of Pat O’Callaghan RIP.

The main sources of the research were the Leitrim Observer, Fermanagh Herald, Anglo Celt, and Sligo Champion. Some material came from interviews and from the 1992 video history, the Bee Park reopening book and official Club minutes from the 1980s and 2000 to 2019.

This history covers the GAA in the area over the last one hundred and seventeen years with a sprinkling of social history. Its sure to evoke many memories and much debate. Should there be errors, omissions or if people feel left out, they were genuine oversights.

2020 was a surreal year with the spread of Covid 19. In Ireland sport came to a shuddering halt as did all other activities countrywide in mid-March under “lockdown.”

It is hoped all readers will enjoy the new enlarged Glencar/Manorhamilton GAA Story edition and that it will be inspirational for all the area’s people. It is available in MacManus Pharmacy, Caz Cards, Gurn’s Milestone Lounge, McCormack’s Mace, Killasnett Co-Op, and Mullin’s Petrol Station Shop.