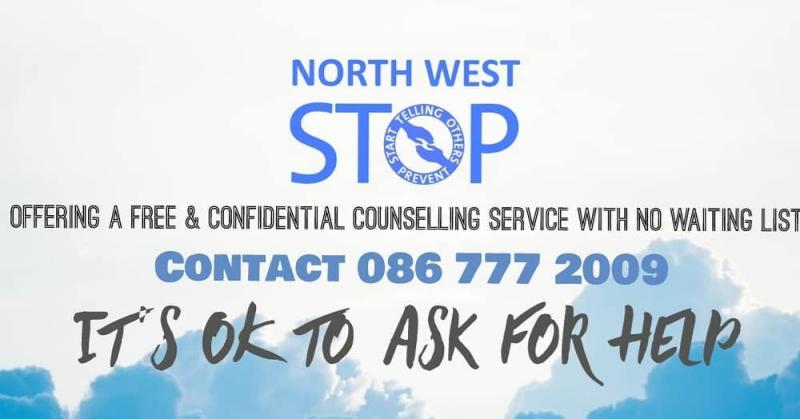 North West STOP Chairperson, Tom O’Reilly in his address to the organisation’s recent annual general meeting, which was held via Zoom, stated he was “delighted North West STOP had grown rapidly in the past two years.
“We had wondered if we could survive two years ago and look at where we are now. This is due to our counsellors on the ground. I thank Dermot Lahiff (the Counsellors Coordinator) for his work day in day out, week in week out.”
Tom paid tribute to Deirdre O’Hagan for excellent work as Secretary for the past five years while he also singled out for praise founder members Carmel, and Sean Fallon for their outstanding dedication to North West STOP.
The Chairperson also thanked hard-working office staff members, Emma O’Hagan, and Rosa Corr, as well as Marie Reynolds from the Tús programme and the Community Employment Scheme for their continuing support of North West STOP.
Mr. O’Reilly also stated, “people have been exceptional in their donations and fundraising over the past twelve months (for North West STOP) and in the Christmas ahead and we can’t thank them enough.”
He also thanked Ocean FM, Shannonside, Mid-West Radio, P. J. Leddy, and the Leitrim Observer for their publicity. Tom also added, “North West STOP hopes to have the support of an ambassador in 2021 which we are currently working towards.
“I hope North West STOP will continue to grow in the next two years as it has done in the past two years. We have currently commenced with a sub-committee to define the roles and responsibilities of all members of North West STOP.”
Addressing Friday night’s AGM on behalf of North West STOP counsellors, Dermot Lahiff stated “the counselling would not be possible without the support of the Committee.
“There has been a cluster of suicides in the Irvinstown area of Fermanagh recently with which our counsellors are working.
“Counselling has and is being currently provided in North Monaghan, North Galway, Roscommon, Donegal, West Cavan, Longford and Sligo/Leitrim, as well. We must not disregard our roots where we came from – we are currently the only group doing this and we need to keep the focus on the Community service for the North West.
“We are providing this service where other national services are not providing it. We are dealing with complicated counselling and at worse provide counselling within four days and at best within twenty-four hours.”
In annual her report Treasurer, Tina McSharry stated donations and sponsorship had decreased to €57,000 from €71,000 in the previous year, a decrease in €14,000. Expenditure had increased from €62,000 to €66,000, an increase of €4,000.
Secretary Deirdre O’Hagan in her annual report paid a tribute to all North West STOP fundraisers and listed a number of fundraising events that are taking place between now and January 31.
Deirdre also said “77 organisations/people have raised money in the past 12 months with 27 groups getting involved in the Odd Socks Day. Without these people there would be no North West STOP – it doesn’t matter how good the Committee, Directors or Counsellors are, if we don’t have people prepared to fundraise, we are nothing.
“They are what keep us going.” Deirdre also “urged more people to become involved in fundraising or helping out during the year.
“ I wish Ita McTernan, who is stepping down, well and I also welcome the new faces that have come on board” North West STOP.
Meantime when the election of Officers and the Committee took place at the AGM outgoing Secretary, Deirdre O’Hagan did not seek re-election and was replaced by Annie Cull. Deirdre was later elected as Assistant Secretary.
Outgoing Vice Chairperson, Padraig Fallon also did not seek re-election and he was replaced by Nicola O’Connor. It was also announced that long serving North West STOP Committee member and Director, Ita McTernan was stepping down.
The Chairperson Tom O’Reilly said he “would like to take this opportunity to thank Ita McTernan for her role as a Committee member and Director and, for her outstanding contributions.
“She has a very level head and had a confident way to guide us along. Her years as a mental health worker has been invaluable for our Committee and we are delighted that she intends to continue as a ‘foot soldier.’ I am sure I speak for all the Committee in wishing Ita well and we extend our unanimous gratitude to Ita.”
North West STOP Officers – Chairperson Tom O’Reilly, Vice Chairperson Nicola O’Connor, Secretary Annie Cull, Assistant Secretary: Deirdre O’Hagan, Treasurer Tina McSharry, Assistant Treasurer Colin Gilligan, Communications Officer (Facebook, Twitter/Instagram) Roisin Murphy, Assistant Communications Officer Michelle McNama, P.R.O P. J. Leddy; Committee – Delma Cull, Kathleen O’Hagan, Joanna McWeeney, Aoife Keaney, Dermot Lahiff.