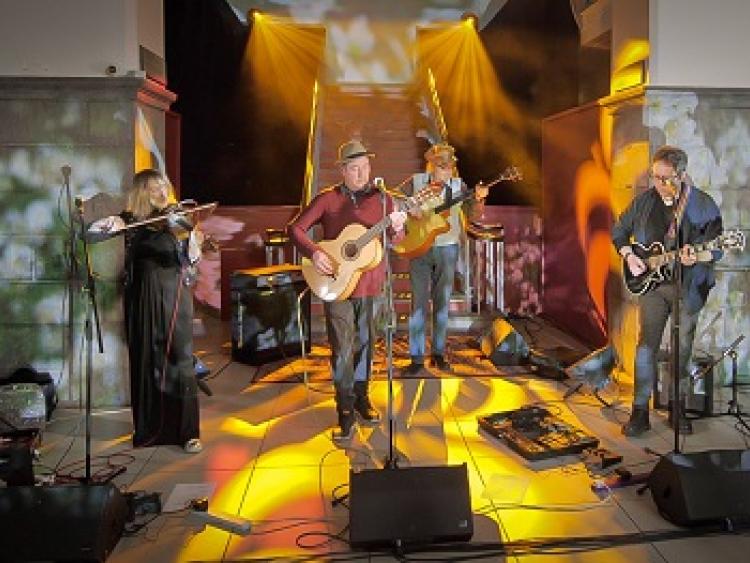 The Sky From Here concert series continues tonight, Thursday, April 15 with a streamed live gig from Free Speaking Monkey.
New songs inspired by the local landscape and locations throughout the county and region are being released online for a worldwide audience by The Dock throughout April in The Sky From Here a series of exclusive streamed performances.
The intention of the project is to shine a positive light on the region and to bring communities together in celebration of their localities.
The Dock commissioned four groups of musicians to compose the songs and then recorded them performing their new work as part of full-length gigs. The individual songs are being released as especially produced videos that will include images of the local landscape interwoven with the performances.
Free Speaking Monkey live in Leitrim and play new exciting, alternative, original music. The collective consist of songwriter Ciaran RockVocals/former member of The Pale, Brian Sweeney guitars, Dee Armstrong (also of KILA) on Fiddle and Henry Pearse on Bass.
The band have been well received well and their 4 track Ep 'Sirens' launch was a great success leading the band to play at the Electric Picnic, Knockan Stockan and Earth Fest. Highlights included gigs at The National stadium, Sligo with Damien Dempsey and Stoneywood’s Fest with Declan O’Rourke.
The organisers of the series were delighted when they agreed to be part of The Sky From Here music series and welcomed them into The Dock earlier this year to record a gig and also perform their specially commissioned song “Living in the pages of History” which was released online in the last number of weeks.
The bands brand of music is eclectic. It has been described as a 'Genre of their own' (Mark Mac (Palfest), 'Dark Beautiful Ethereal' (The Star Newspaper) and 'Tim Burton meets The Pixies' (Sound Cloud). They hope to release a new album and await the end of Lockdown to play live again.
The organisers of the series spoke to lead singer Ciarán Rock when the band visited The Dock to ask him what they had been up to in the last 12 months when it was not possible to play gigs.
“Since the lockdown the band have been writing songs, recording and making videos but we really miss the live circuit,our residencies and festivals. The buzz of a crowd and its atmosphere is well missed. We would like to thank The Dock for the commission to write a song for Kilty; Living in the pages of History'.
“It has been a lifeline during Covid and we are really excited about this coming show. It has certainly given us an appetite for what we do as a group... to write and play original songs.”
If you have seen the video for the commissioned song then you will no doubt be looking forward to the full-length gig. That will be available to view from this Thursday, April 15 until Sunday, April 18 on www.thedock.ie.
The gig is free to view but, if you are able to support us with a small donation it would be a great help to us so that we can continue to programme gigs and other events.
The Sky From Here series is a celebration of place and the rich musical talent that exists in the area.
It is produced by The Dock with funding from The Arts Council and Leitrim County Council in association with media partner The Leitrim Observer.

Read more about the Sky From Here Series HERE