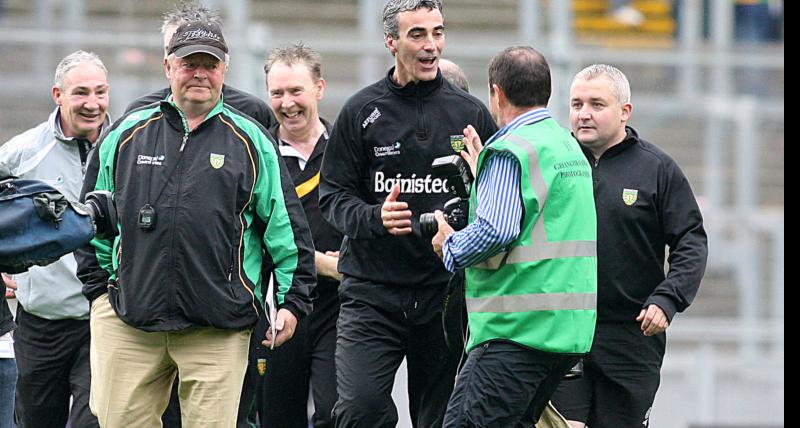 He was the "King" of sports snappers in Donegal and one of Ireland's best ever photographers, but you would never know.

He was grounded, feisty earthy, neither looked up or down on anyone and always knew who he was, a proud Ard Patrick, Naomh Conaill and Donegal man.

His passing will evoke a sense of huge loss and sadness among all who knew him, not just in is native Glenties, but far, far beyond.

His photographic collection of GAA related photographs is unparalleled in Donegal and he had a great knowledge of the game.

He spent many years as a self-employed photographer, but it was through sport that he he became known far and wide, and he travelled the length and breadth of the country for sporting events, primarily involving Donegal GAA teams.

He was widely regarded in his profession as being one of the most talented sports photographers and had a real eye for that special photo, or one in a million moment.

His first photograph appeared in the Donegal Democrat in 1981.

Even though we knew things were not good it is hard to believe that we will no longer see those darting dark eyes full of mirth and mischief and hear those lightning one-liners that stayed in the press box long after he was gone.

Like Johnny Cash, he dressed in black, the long lens and the black leggings for the weather and that great Zapata moustache that gave him a gravitas that he was totally unaware of.

Like Cash he tasted life through the teeth and overcame difficulties, but always with a smile and a bon mot.

He was also a great story teller and could charm the hinges off Heaven when he wanted.

I only got to know him really well in recent times but I claim a small share in the better tears of my colleague.

And I learned so much from him about how to put people at their ease before getting the pic of all pics. "Jack" loved people and they loved him and only he could get away with those epic famous captions in the Post. Nobody loved his county more and nobody did more to promote it through the lens and there will never be another like you.

This is a small extract from a great interview he gave for Local Legend in the Donegal Post in January 2018.

"There’s a lot more boys around Glenties and Donegal that you could get for this local legend thing caddy”
This was Michael “Jack” O’Donnell’s typical modest response to a request for an audience with a true local legend.
And the answer lies in the name, as surnames will always be superfluous for the man who has had a life-long love affair with the lens, his own Glenties and Donegal GAA.
Everyone knows who Michael “Jack” is; from all over Ireland’s loveliest county, but especially in the GAA heartland that is south- west Donegal.
In his earlier youth, he was a bit like Michael “Jack” the Mexican with a Zapata moustache, a camera hanging from his neck and two dark eyes dancing with devilment.
And from 1981 his sports pictures adorned the pages of the Donegal Democrat.
For he has always had the eye for the quirky, those silent moments when we reveal who we really are, and Michael “Jack” has captured so many of these treasures in 37 years behind the camera.
They are all there, wonderful sharp black and white photographs and memories of Tir Conaill in all its magnificent moods, the ecstasy of All-Ireland triumphs, the sorrow of narrow defeats, the laughter of friends who share a bon mot.
It could also be a sunset that caught his artistic eye and there is a mighty one of Matt Gallagher standing tall, the man behind the wire at the Canal End nefore his people, at Croke Park, with his hand raised in triumph after Donegal defeated the Dubs in 1992. 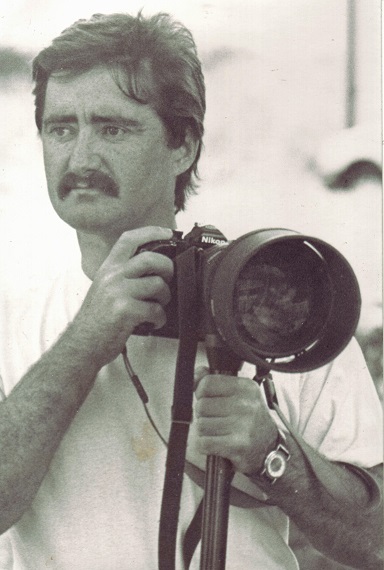 And there is also that wonderful moment when the gods smiled on Tir Conaill and Michael “Jack’ forgot the camera to do a tango of sheer delight with Declan Bonner, on that same sacred Sunday evening in September.
But Michael “Jack” was never just an outstanding snapper; he was and is a fiercely passionate Glenties and Donegal man.
Na Gleannta holds a special place in his heart and their county championship in 2005 had the town crying tears of joy.
This was the first time that Jim McGuinness made his mark and Michael says of his Ard Patrick neighbour:
“If you cut Jim McGuinness he would bleed blue”.
And he has had unprecedented access to training sessions under various managers right up to the present day.
He also managed the delicate balance of almost being part of the team and was trusted implicitly, but never intruded and knew when to keep a professional distance.
And he has a very simple quote that partly defines his life and work.
“If you are doing something you love then you will never have to do a day’s work in your life”
Slan go fóill a Chomradaí and I just know we will meet again in a place where there is no more pain, and the moon is an angel's wing.