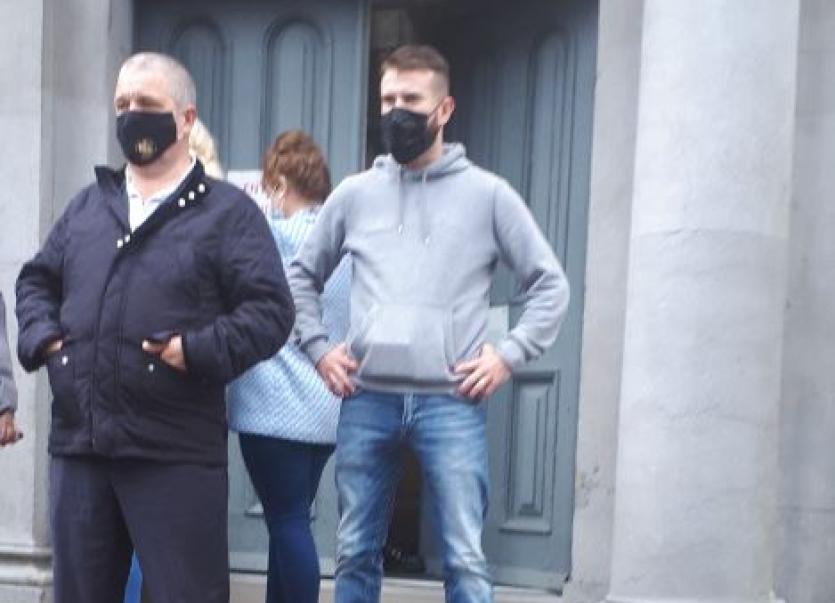 The groom, catering firm and parents of a bridal party have issued a “full and frank” apology for their part in the staging of an “illegal” traveller wedding reception in Longford last week.

William Stokes, together with his father Patrick Stokes, both of 1 Willow Park, Strokestown Road, Longford, Stephen Kelly, 49 Railway Meadow, Farneyhoogan, Longford and Peter Vocella, Luigis, Main Street, Longford were all ordered to hand over €3,000 in compensation following a special circuit court sitting in Longford this afternoon.

All four, together with the bride, Shelby Stokes, alongside two other members of the wedding party and marquee owner, Alan Horohoe of Ventura Marquee Hire Ltd, Ballyleague, Lanesboro, Co Roscommon had been ordered to come before circuit court Judge Keenan Johnson after an initial hearing was held last Thursday.

That came less than 24 hours after over 100 revellers attended a wedding reception on the outskirts of the midlands town despite an emergency court injunction being granted to Longford County Council to prevent its staging.

The court was told by counsel for the local authority Niall Flynn, BL, said neither the council or gardaí were unable to call on any witnesses to confirm the order had been served on the bride, Mrs Stokes or two other members of the bridal party at the time the wedding was taking place.

It was also revealed Mr Horohoe, as the provider of the marquee, only became aware of the order on May 6 at which stage the 2,000 sq ft tent had already been taken down.

However, Mr Flynn said the court was in a position to proceed with alleged criminal contempt proceedings against the groom, Mr Stokes, his father and father in law as well as fast food takeaway proprietor Mr Vocella.

Paul Gunning, BL, acting for Mr Stokes Snr and Jnr as well as Mr Kelly, said his clients took the matter before the court “very, very seriously,” adding it was not an environment they wished to find themselves in just a matter of days after such a happy occasion.

He said each of the accused were willing to offer a contribution to charity as well as tender a wholehearted apology to the court.

Mr Kelly was the first to take to his feet, saying the actions he undertook in spite of a court imposed order was something he deeply regretted.

“Your Honour, I am more than sorry for any wrongdoing I have done,” he said.

“To you and your court, to everyone involved and to the people of Longford and Ireland (I am sorry).”

Mr Vocella likewise stood briefly to relay his regret over what had unfolded.

Judge Johnson said the actions displayed by those involved in the hosting of last week’s wedding celebrations was premeditated and one which had run the risk of turning Longford into a Covid-19 blackspot.

“Their actions were reprehensible and are neither excusable or justified,” he said.

“By their actions they have put the planned reopening of society in the Longford region at risk.”

He also said the repercussions of holding such an event had done little to further the plight of the wider travelling community.

“It could be said that their actions only further increase the isolation of travellers from the rest of society and that is something which is wholly undesirable,” he said.

“It has certainly damaged the very impressive and important work done by Pavee Point to highlight the plight of travellers and the factors that work against them in achieving their full potential.”

He said respect was a “two way street”, a virtue which had been disregarded in view of the country’s ongoing public health emergency.

“Unfortunately by proceeding with the wedding reception in defiance of public health regulations and in defiance of the court order, the parties in contempt have shown a gross lack of respect to all frontline workers who put their lives on the line to treat patients suffering from Covid-19.”

Judge Johnson also called into question the motives of both Mr Horohoe and Mr Vocella, both of whom provided the marquee and catering on the day of the wedding.

“The actions of the marquee supplier and the caterer are particularly offensive as they enabled this flagrant breach of the public health guidelines to take place,” he said.

“In particular, their actions were an insult to legitimate businesses who have complied at great cost to themselves with the Covid regulations.”

Each of the parties were ordered to return to Longford Circuit Criminal Court on June 1 with €3,000 in compensation, the proceeds of which is expected to be divided between three local charities namely St Christopher’s Services, St Vincent de Paul and Co Longford Hospice.