An aerial view of the the proposed route corridor through the Attirory area of Carrick-on-Shannon.

Residents in the wider area of Attirory that includes the housing estates affected by the proposed N4 route corridor are preparing a group submission which they hope to deliver in the coming days.

Residents are up in arms about the proposed route corridor cutting directly through the heavily populated area and through existing houses and properties.

A number of public representatives have given their support with Minister of State, Frank Feighan and Marian Harkin both visiting the area in the past week.

Marc MacSharry told the residents group that he is also going to make a submission on their behalf.

The residents group is now finalising its submission and gathering signatures in the Attirory area. 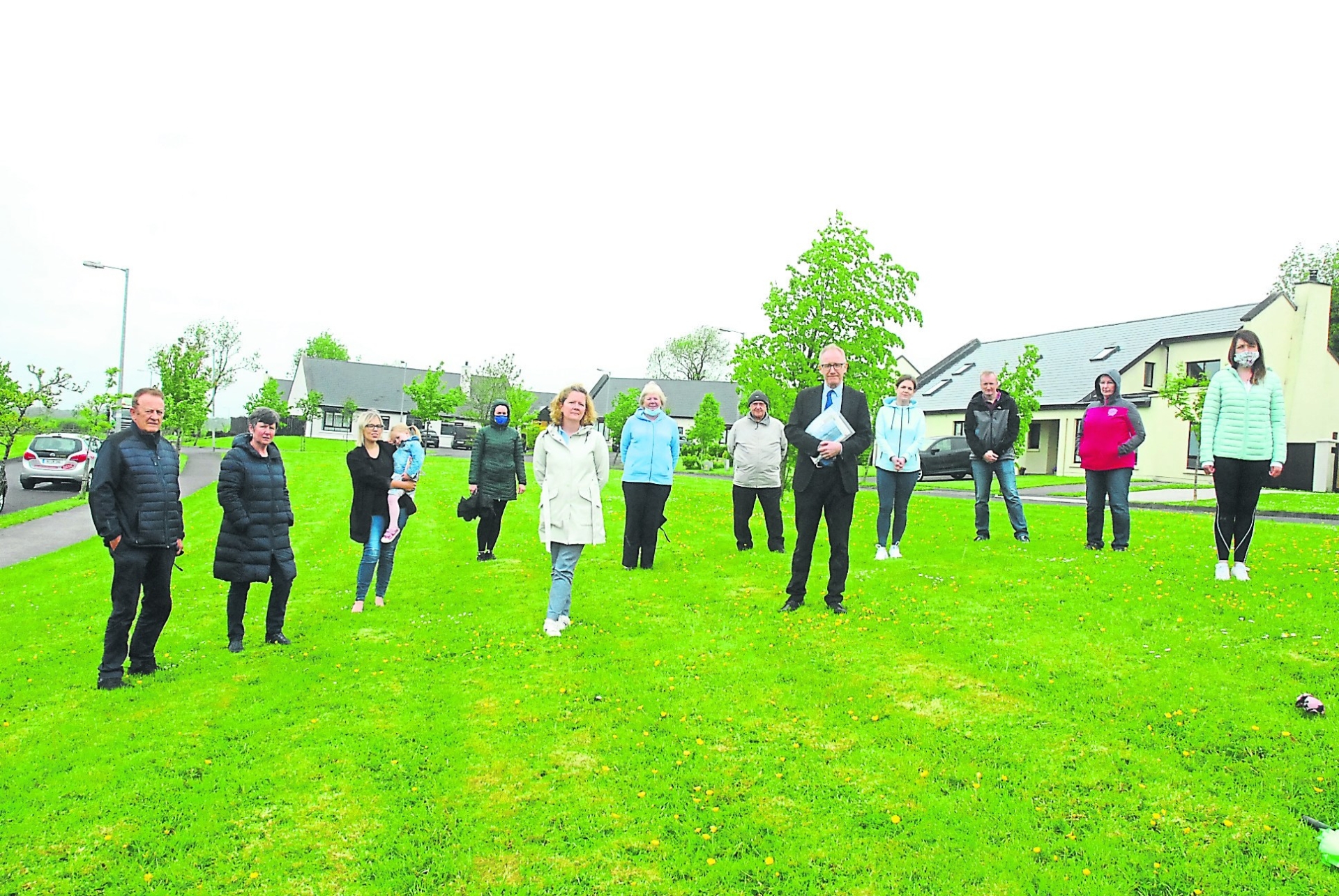 Meanwhile, residents in other areas that may be affected, including Lisduff, Keenaghan, Dromore, Cartown, Cloonsheerevagh, Cloonshebane and Hartley are also angry about the detrimental impact a bypass route through those areas would have.

Spokesperson, Charles Gibbons, a resident in Keenaghan, said the proposed Carrick-Dromod bypass has a number of route options that are on the table for selection at the moment and two routes in particular, the Green and Purple routes, pass north of Carrick-on-Shannon through Lisduff and Keenaghan and cross the Castlecara Road at Dromore and Clogher, impacting many family homes along this stretch.

“The road will continue on through farmland to cross the Leitrim road near Cartown and then swing left to cut through Cloonsheerevagh, Cloonshebane and Hartley. Then running parallel to the Shannon through Corryolus on what will surely be the longest raised road/bridge in Ireland.

“If you live in any of these areas you will be impacted. Another key factor to be considered is that there are a number of sites of archaeological significance and protected flora and fauna along these corridors. With all that in mind, these routes should not be considered as a “Preferred Route”. 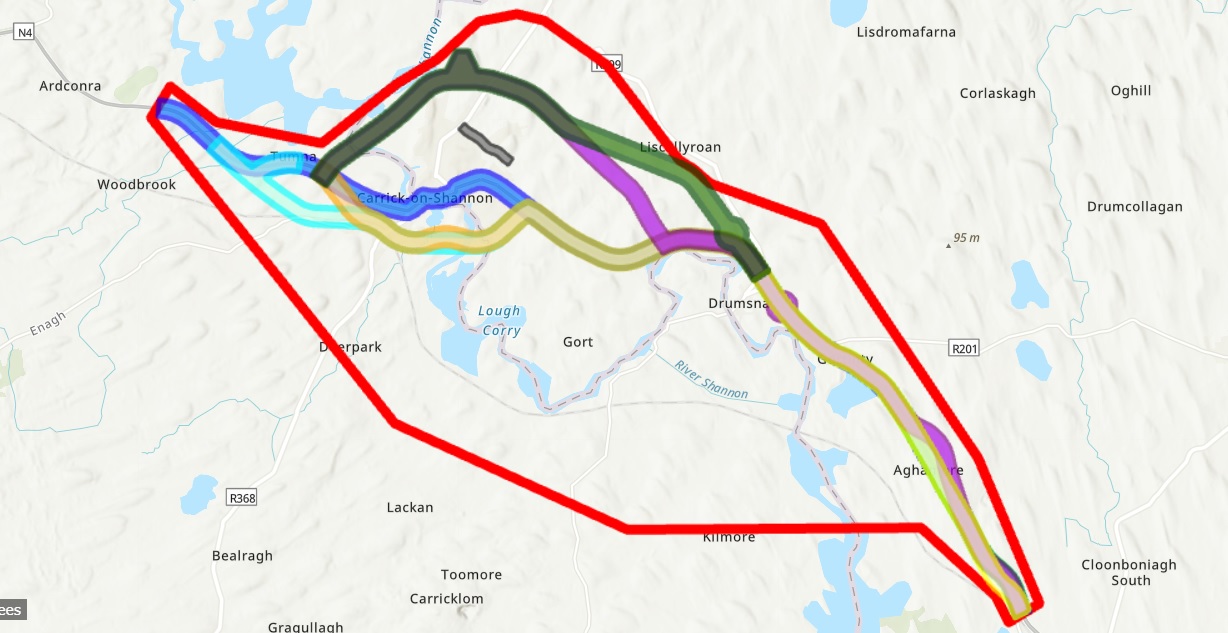 “We need to think about all the routes and work together to stop the madness that will destroy our beautiful area of Carrick-on-Shannon. Think about the damage this will do to the environment, not to mention tourism.

“The elevated road (motorway spec) will run right next to the river for 2km before crossing it and would directly impact over 6km of waterways at the junction of the Boyle and Shannon rivers.

“The visual impact will be severe due to the road's height above the river at summer level (flood range here is 2.45 metres). Think of a sky train!

“How will this route affect the proposed Leitrim to Carrick greenway? Due to its elevation you would see it for at least 5km from the greenway. This is all before we even consider the flooding issues of this area.

“These proposed routes will have a significant impact on nature, the environment and the physical, mental health and wellbeing of the residents in this peaceful setting.

“There will be detrimental impact to the environment as part of this route is a Wildlife Heritage Area, with sightings of curlew and warble in recent months. There are currently eight curlews being monitored in the Hartley Bridge area by the Curlew Conservation Programme in Leitrim / Roscommon.

“There are regular sightings of red squirrels, barn owls, red deer and bats in the area. The area is a busy walking route and Irish Waterways have published a ten year Masterplan for the Shannon which includes a Blueway and Greenway.
There are numerous wells, archaeological sites, old school buildings, ring forts and a site of an old church on this route.

“Leitrim County Council stated on Shannonside last week that a bypass will also help the town by taking away traffic and bringing in more people, but as anyone that has ever travelled on the M4, M6, M7 or M8 will know that the last thing you want to do when travelling on these bypasses is to leave the road to visit a bypassed town.

“The other options regarding public transport and the “new normal” of people not commuting needs to be front and centre of this proposal and not kill what is left of an almost deserted town centre in Carrick-on-Shannon.

“Please let’s all group together as a community and not a North versus South route battle and stop this attack on our town, county and our heritage by Leitrim County Council, Roscommon County Council, ARUP and Transport Infrastructure Ireland (TII).

“The first consultation session slipped through last year under the cover of the Covid-19 pandemic so let your voice be heard and seek a consultation with ARUP by visiting the carrickdromod.ie website and also complete a submission voicing your objection to the complete project and not just one of the routes before it’s too late,” he said.

The lower proposed routes through Attirory.

Cllr Des Guckian is demanding there be a major extension of the public consultation period for the proposed N4 Dromod to Carrick-on-Shannon bypass.

“The feed-back I'm getting from my many concerned constituents is that an N4 public consultation period of one month is far too short and leaves them all at a big disadvantage,” the Independent councillor said.

“Until Covid is under control and there can be public meetings and in-person meetings and consultations with informed, well-trained officials, there will be no fairness in the system,” he argued.

Cllr Guckian said people are being told that they can go online and have virtual meetings but not everyone has access to broadband and not many are adept at surfing the Council's site.

Cllr Guckian said a really big flaw he has noted in the present plan is that the maps are very vague.

“They need to be much sharper and show the locations of existing buildings and fields. I've asked for large-scale hard copies of relevant sections but have been informed that these will not be available until the staff can get back into their offices. That could take an age,” he said.

“We are now being asked to decide, in a month of so-called consultations, a road route that will be in place for an eternity,” Cllr Guckian said. 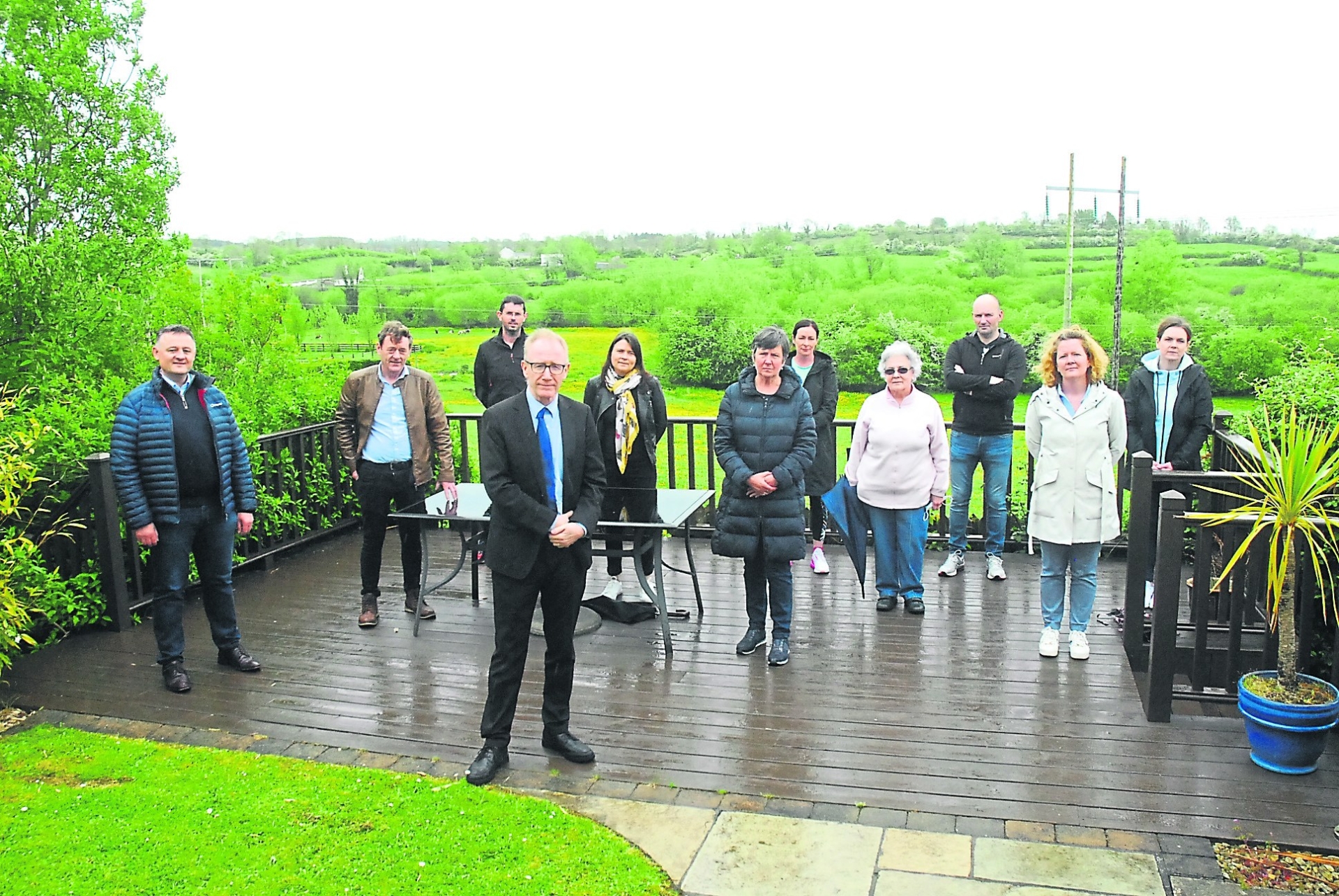 Cllr Enda Stenson said there is a genuine fear among people in various areas of Carrick-on-Shannon that route corridors are going to go directly through their houses, lands and homesteads.

“People are entitled to be up in arms about it, people's livelihoods are at stake,” he said.

Cllr Stenson, said he met a lot of people from the various areas over the past week and listened to their concerns.

He said a ring road is needed within the town, and within sight of the town, and said what is being proposed is “going through the wrong areas.”
Where that ring road might be located, he didn't know.

Cllr Stenson said it is imperative that Transport Infrastructure Ireland (TII) sites down with the Leitrim County Council Chief Executive and the engineers and look at it again.

He said the main cause of traffic congestion in Carrick-on-Shannon is heavy goods vehicles traversing the bridge and asked what is wrong with putting a new bridge in Carrick-on- Shannon.

Cllr Stenson also stated that any continuation of the Dromod-Rooskey bypass as a dual carriageway through Annaduff was not needed as the N4 from Annaduff to Carrick is “perfectly fine.”