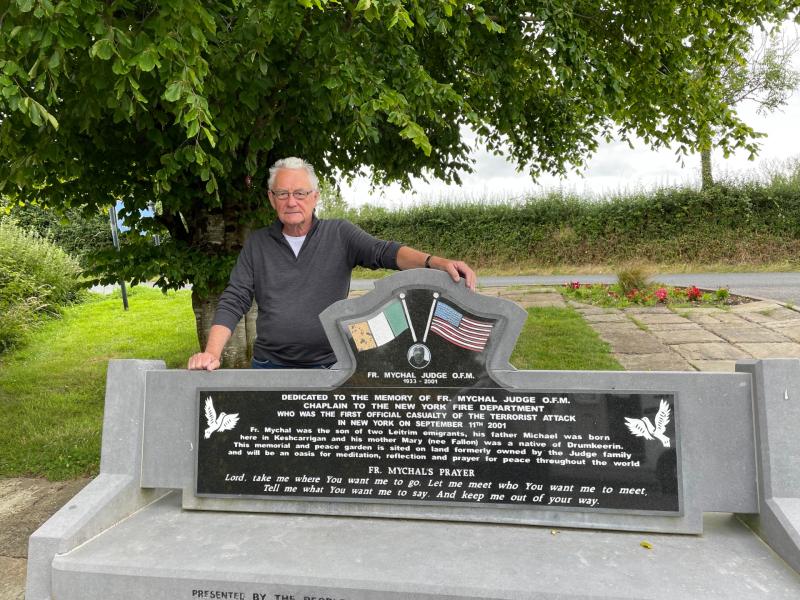 Colm Corcoran at the Fr Mychal Judge Memeorial in Keshcarrigan

'The Phoenix' a song composed by Carl Corcoran and Art McGann is a constructed work of beauty about 9/11.
On the 20th anniversary of the tragedy and the song’s release, the song has been beautifully captured by Ireland's premier acappella vocal ensemble Ardú, arranged by their Artistic Director Ciarán Kelly.

The song encapsulates the images of a tragic day, September 11 2001 including ‘images’ of Fr. Mychal Judge OFM, Chaplin to FDNY and son of immigrants from Leitrim, while celebrating the resilient nature of mankind, and in particular America at this time.
The lyric echoes the words of Emma Lazarus on the plaque of the Statue of Liberty: “Give me your tired, your poor, your huddled masses.”

The music reflects the spirit of strength and defiance of the aftermath rather than the shock of the day – hence the title “The Phoenix.”
Carl Corcoran who is a singer/songwriter and Director of MA in Songwriting at the Irish World Academy at Limerick University released the song in special memory of Fr Mychal Judge.
Carl Corcoran also visited Keshcarrigan and the Peace Garden to get a better understanding of the special chaplain and first known victim of 9/11.
In the song Fr Judge is referred to as a “priest to every colour and every creed.” It concludes with the line “We will resurrect with honour - the Phoenix rising from the ashes.”
The song will be included in some 9/11 commemorative events in America and overseas.