Bundoran RNLI called to help “mooove” cow back to shore 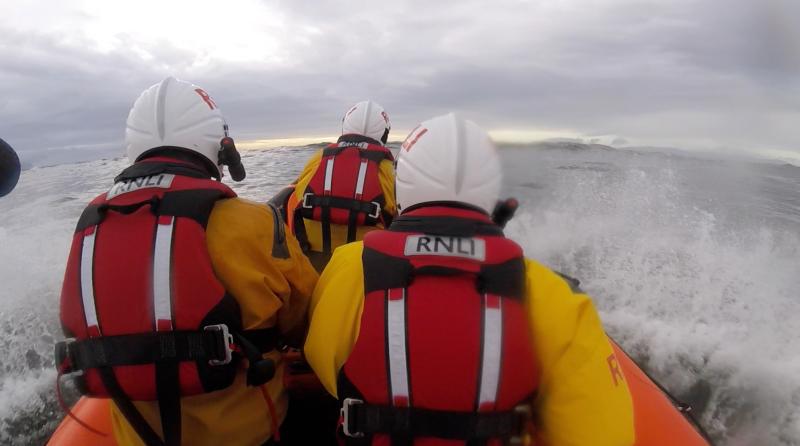 Bundoran RNLI members on their way to help

The volunteer crew of Bundoran RNLI was called out yesterday afternoon (Wednesday 27 October) to reports of a cow in distress in the surf at Tullan Strand, Bundoran.

A passerby had spotted the animal in the water and immediately alerted the Irish Coast Guard at Malin Head who in turn paged the lifeboat crew.

The four crew launched the inshore lifeboat just after 4.30pm and made their way in rough seas to Tullan Strand to assess the situation, while a number of other volunteer crew attended via the shore to offer visual backup to the lifeboat crew.

As the swell was between three and four metres, conditions were difficult for the lifeboat to get closer to the shore with visibility of the cow also tricky for the shore crew. The animal was soon spotted however, by which time, the Sligo based helicopter, Rescue 118, was on scene and using the noise and downdraft of the helicopter, its crew were able to encourage it back to safety on the shore.

Both the lifeboat and helicopter stayed on scene to ensure the safety of the cow which was tended to on shore before both units were stood down.

Speaking on return to the lifeboat station, Bundoran RNLI Helm Michael Patton said: "We were delighted to see a successful outcome from today’s call out and would like to thank those who assisted in the rescue of the cow. If you are ever worried that your pet or animal is in danger, call 999 or 112 and ask for the Coast Guard, rather than putting yourself at risk by going into the water after them."