Use the NEXT > to go through the gallery

The community of Carrick-on- Shannon certainly shone brightly for Focus Ireland’s annual Sleep Out, raising over €6,700 for homeless people.

Members of the group decided to host a Sleep Out in Carrick-on-Shannon on October 15. When word got out, numerous volunteers from other businesses and local groups came on board to help organise the night and help with some online fundraising. 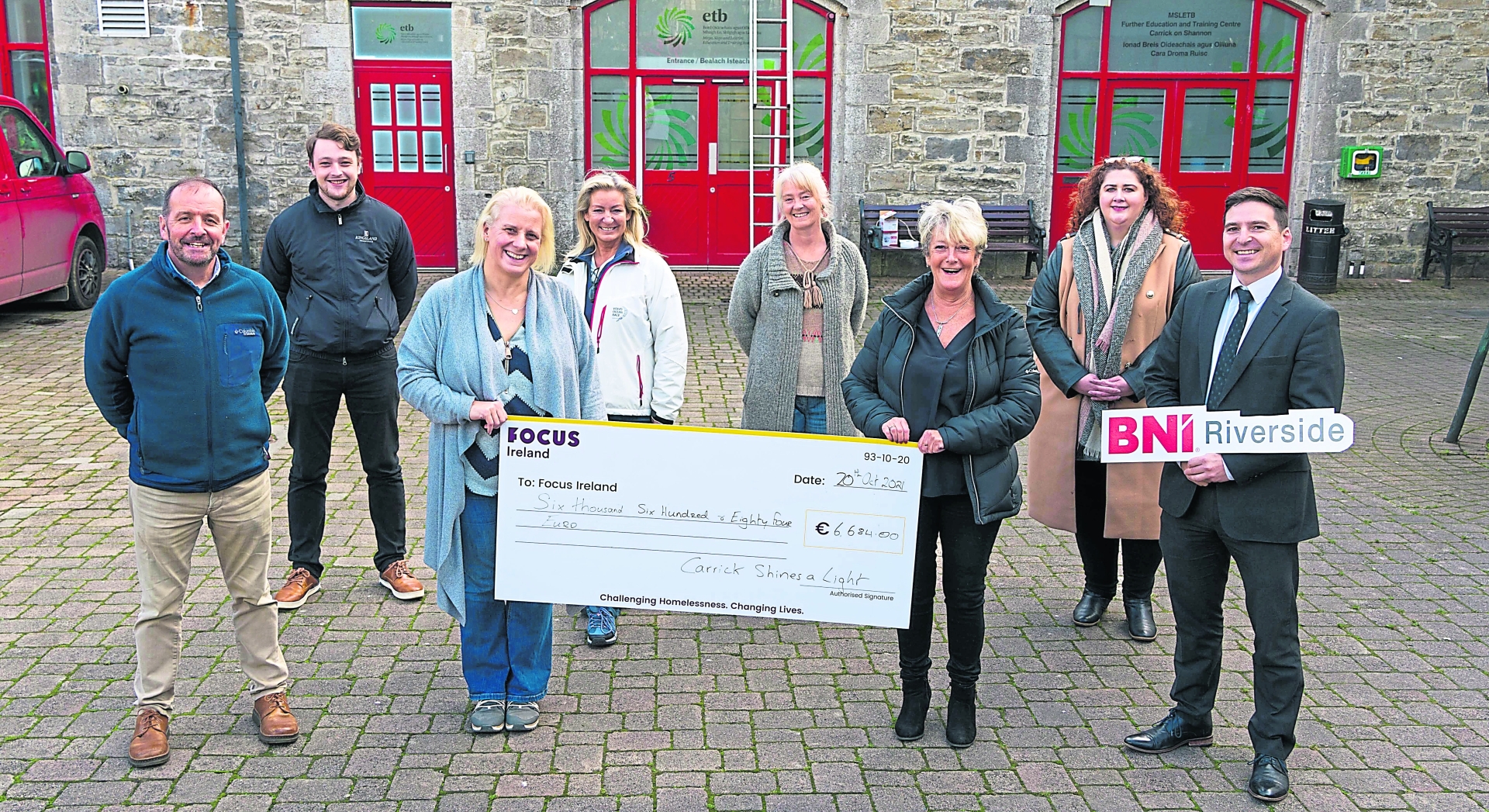 This night would not have been possible to host without the fantastic facilities of the Market Yard in Carrick. We were overwhelmed by the help we received from the community with bucket collections and from our brilliant volunteers, of all ages from 6 years of age upwards.

Some of our volunteers included the Scouts, Carrick’s secondary students in their droves and of course the ever-reliable Tidy Towns folks and Leitrim Volunteer Centre were out shaking buckets from early afternoon followed by several businesses volunteering their time to help the evening run as smoothly as possible.

The entertainment began in the afternoon with tunes and songs from the Market Yard musicians, then the brilliant Callum Wall, a singer/songwriter from Sligo joined us with a bang.
Ruairí Morgan, a rising star from Carrick-on- Shannon, closely followed with some of his own compositions.

We had expert line dancing tuition from the award-winning line dancer, Helen O’Malley. We then cleared the floor for Crossan School of Dancing who brought along some of their newest members to give a superb display of Irish Dancing.
This was followed by more local talent, the outstanding Ryan Mulligan and then the impressive Wallop the Stop.
We had a fantastic display from the O’Neill-Blake School of Dance who stopped in on their way to a Feis in Galway.

Next the splendid Oisín Morgan and Fiachra Ó’Torna played a few jigs and reels to warm us up and then the night concluded with an exceptional performance from Eoghan Mathews who has just released his first single on Spotify, remember you saw them all Shining a Light in Carrick’s Market Yard first.
All these musicians and dancers so generously gave their time to help raise funds and awareness for Focus Ireland.

There are a few people that deserve a special mention who went above and beyond to make the night a huge success; Oisín Morgan for all the time and effort to sorting out the musicians, Deasún Lyon the most amazing MC who kept the night flowing from start to finish, Nessa O’Brolchain from the Olive Tree who generously sponsored the hot chocolate reception and allowed us the use of her kitchen to prepare the very tasty mulled wine, which was prepared by Patsy Garland from the scouts.
A big thank you to Caroline Connolly for most of the online donations on behalf of James, who slept out on the night.

To Vitto’s Restaurant for allowing us the use of the safe for the night. To the Landmark Hotel who sponsored breakfast for all who slept out and finally, to BNI Riverside chapter lead by their president Sharon Garland for the huge efforts in organising and ensuring that the night ran flawlessly. Without Sharon’s hard work, the night would not have been possible.

After the music was finished some volunteers went around the various pubs with buckets and we would like to thank all the publicans for allowing us to do this. The generosity of people in the community gave us all hope, with so many people stopping along the roadside and on the street to give us donations as we walked around town.

For those that slept out, Sharon Garland from Kilmore Signs & BNI President, Martin Burke BNI member and MJ Burke Solicitor, Michelle O’Halloran who works in the community, Leon Quinn of Reverb Studios, and James McLoughlin from Absolute Safety, a huge thank you for your support.

After the music had stopped and everyone headed home to warm comfy beds, a silence fell on the town and the reality of the night hit us, we made up our beds on the cold, hard surface but it was a small sacrifice to make to help raise funds and awareness for people and families who find themselves in this situation every night.

Ironically, the next morning over a breakfast in the Landmark Hotel we all felt that the night had put some perspective on the loneliness and harshness of day-to-day life that the homeless people and families feel every day.
We spent a few short hours being uncomfortable but were then able to get into our cars with all our belongings and head home to our warm comfortable homes and loved ones. Remember, we are all only a few misfortunate events from losing our homes and comforts that we take for granted.

The online fundraising page is still open if anybody would like to donate, please see link below or find us on Facebook at “Carrick on Shannon Shines.”

There is a donation box beside the till at Masterson’s Fuel Station N4 (formerly Kennedys) or you can drop to Kilmore Signs in Hartley Business Park or Call Sharon on 086 3625888.
https://shinealight. focusireland.ie/fundraising/ carrick-on-shannon-shines