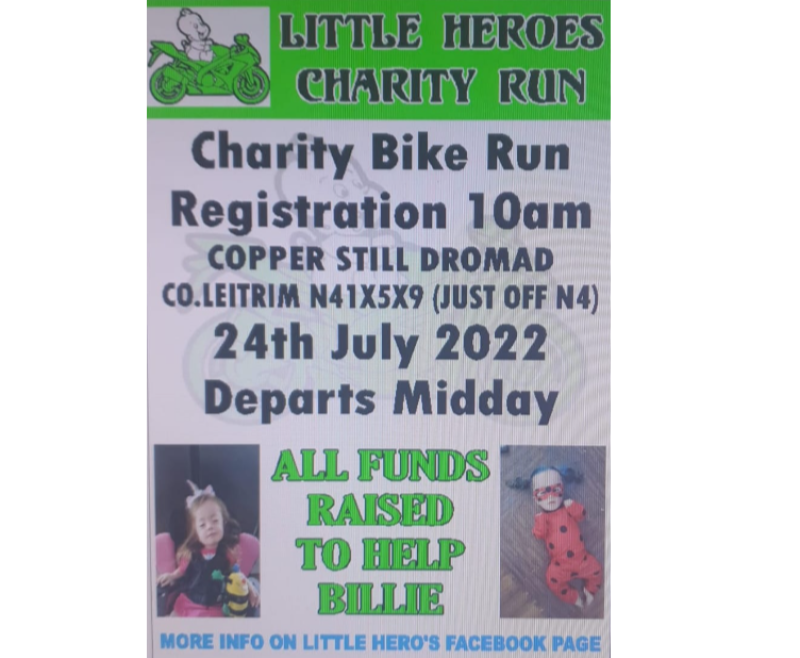 Billie's bones can break and fracture at any time and requires special care and attention. Carer Ann Reynolds approached Little Heroes organiser, Glenn Campbell, about running this year's event in aid of Billie. The condition is one shared by Adam King who came to prominence when he appeared on the Late Late Toy Show offering “A Hug For You” to the nation.

“What a courageous beautiful little warrior she is,” Ann said of the young lady, “she has a wonderful mum called Danielle. “Billie started in Ardagh school and is making great progress, she has brilliant teachers and SNAs. Billie is a wheelchair user and needs a lot of support, but she is so determined to be as independent as possible within her limitations.”

Billie has many challenges in her life. As well as osteogenesis imperfecta she has to cope with sleep apnoea, profound hearing loss and difficulties regulating her blood sugar levels, “She is the most fabulous child. When I first started working with her she had about five words, now she 1,005. She is a real talker, an entertainer. She is a joy to be around,” Ann said.

Glenn Campbell is one of the forces behind the Little Heroes Charity Motorbike Run: “We set up the charity back in January 2020 to get out and do a bit of a run after the restrictions were lifted. We were one of the first runs to get out. We started at the Glenview in Aughnacliffe.”

“When he was three months old our little man had an operation in Temple Street Hospital. We wanted to do something to say thanks, so we organised the first Little Heroes Charity Motorbike Run,” Glenn explained.
The first two runs were the same route, but run in opposite directions each year. The route this year starts at the Copper Still, Dromod and takes in Roscommon, Cavan and Leitrim.

Glenn says there is a very social aspect to the run: “The first year it was unbelievable. People from Connemara came up. Registration was at 10am, so they left Connemara at around 7am that morning, that was for Temple Street. Last year we did it for St Christopher's. Instead of just donating the money directly we asked them what they needed. We bought them an commercial washing machine and tumble drier for their house.”

When plans for this years event were being put together Glenn was approached by Ann. “I met with Ann and she asked about doing the fundraiser for Billie. When I met Billie I said there is no question about this, we are going to help out in any way we can. That was last March and it is all go since then. A lot of effort has been put in since then.”

Glenn is hoping for a good turnout for the event. “It's a central location, just off the N4 and is suitable for all bike. This is not a race, we will accommodate as many bikes as possible, if lads want to do it on 125's or a Honda 100 then they are welcome. It's a 200 kilometre spin,” he tells.
The third Little Heroes Charity Motorbike Run takes place on Sunday, July 24.  Registration  at the Copper Still, Dromod N41X5X9 from 10am. Departs at 12 noon. All  welcome.