Criticism levelled at what is being published on social media 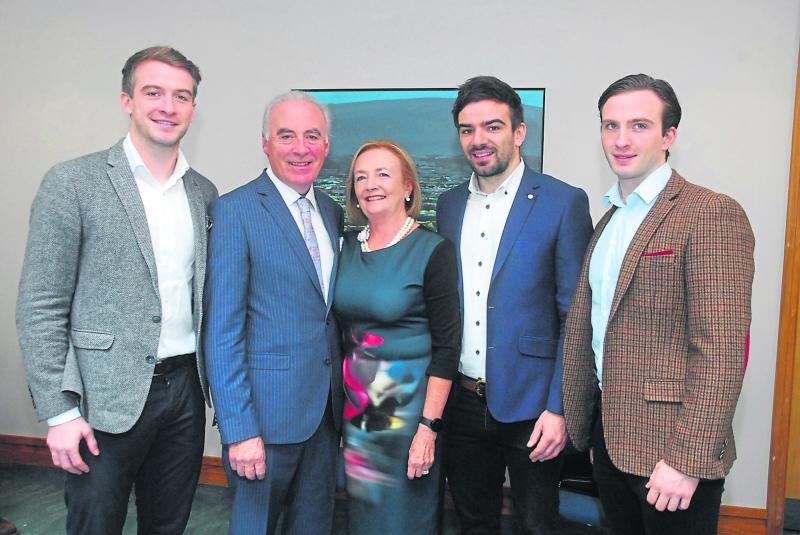 On Tuesday last, July 26, County Leitrim State Solicitor, Noel Farrell, retired after 20 years in the post serving the Office of the Director of Public Prosecutions and the people of Leitrim.

Speaking on behalf of Director of public Prosecutions, Helena Kiely, chief prosecution solicitor in the DPP, said it was a pleasure to be present to mark the end of a long and very distinguished career and acknowledged the 20 years Noel has given to the DPP and also to the people of Leitrim. 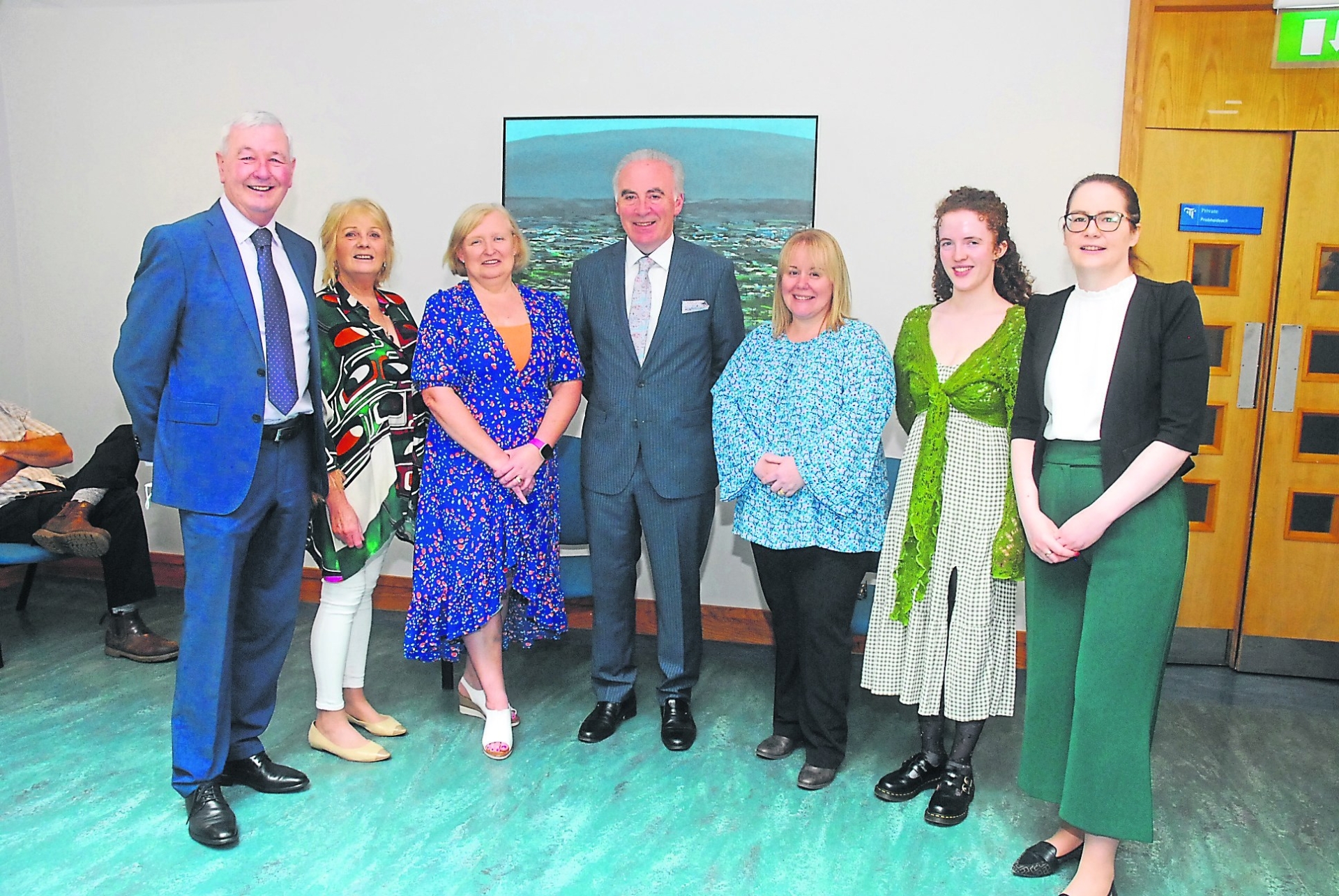 Noel was officially appointed on August 5, 2002 by then Attorney General Rory Brady and has acted for three DPPs, namely James Hamilton, Claire Loftus and most recently Catherine Pierse.

“The role of State Solicitor is a really important role in the community, it requires great personal commitment and dedication as well as independence of thought and professionalism by all those involved,” she said.

She added that it's not easy being a State Solicitor in a small area and county.

“You're privy to very sensitive information, it's a very public role and it's a role which demands public trust and Noel is worthy of that public trust and has delivered on that commitment,” she remarked.

She stated that Noel's opinion on a prosecution was really valued and his judgment and insight was always important to the Director when making decisions.

“Noel has a very unassuming professionalism about him. He has a quiet charm and a discretion that has always earned him the respect of the court and his many colleagues throughout the years,” Ms Kiely said.

Noting that it was not a final farewell and Noel will remain in private practice, she thanked him for the great public service he has given to the people of Leitrim and the office of the DPP.

“I hope that in relinquishing the duties of State Solicitor, Noel will be able to spend a lot more time with his wife and sons, attend a few more football matches, and I hope it's the beginning of long, happy and healthy retirement,” she concluded.

Peter Collins, President of the Leitrim Bar Association, said he has known Noel all his professional life.
Noel's firm, George Lynch & Sons, Mr Collins described as “an extraordinary firm that has produced every Leitrim State Solicitor since the foundation of the state, with the exception of the now Judge Conal Gibbons.” 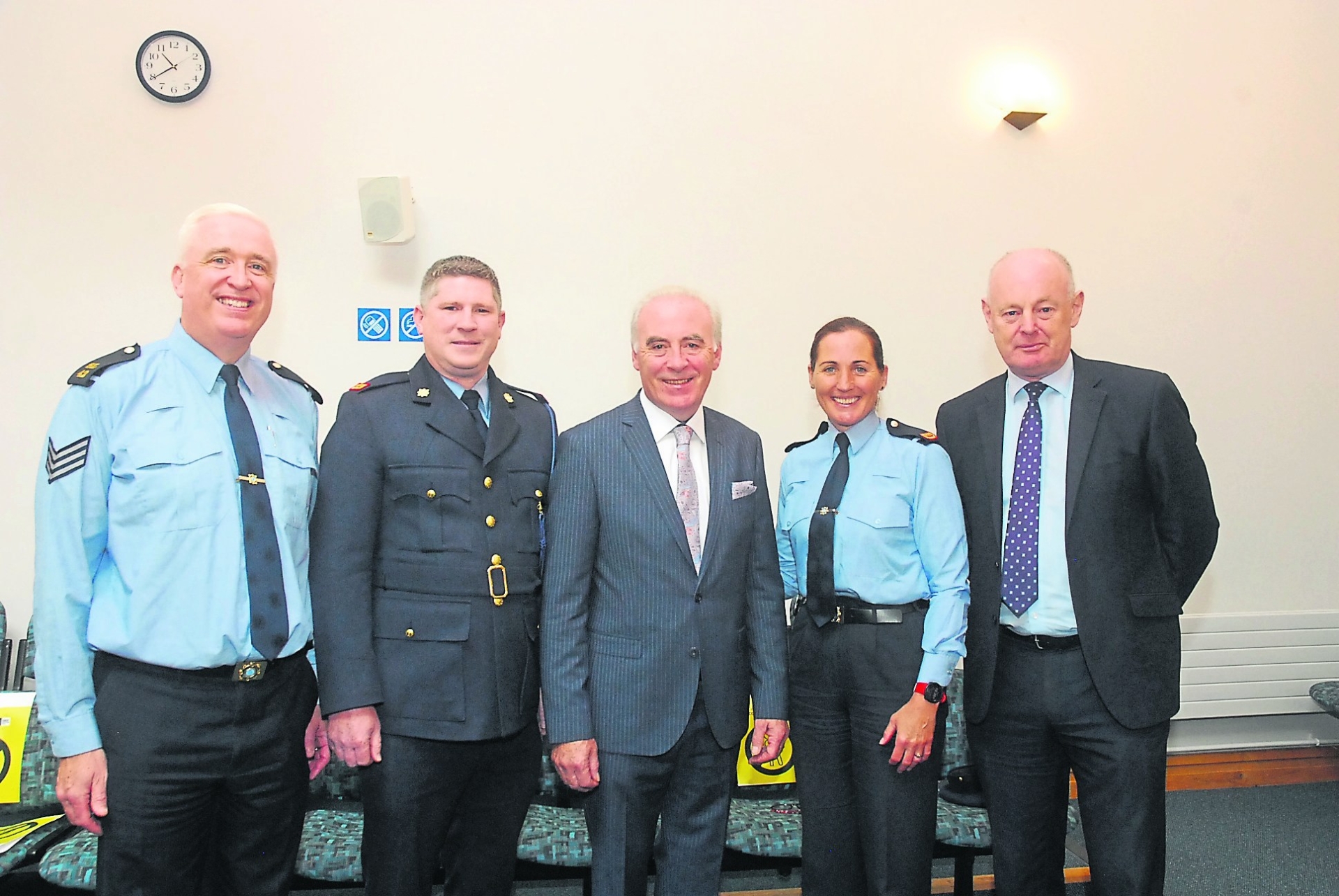 He said, “Noel is a very fine solicitor, an excellent musician and vocalist. He will remain as a practising solicitor and will continue to be a valued and trusted colleague.”

He said the role of State Solicitor would have evolved and developed so much since Noel was appointed with rising crime, new legislation, interpretation of High Court decisions, and case numbers.

He wished Noel the best of luck in his retirement and said he had made a huge contribution to the courts in Leitrim, and hopes that he would have lots of time and good health with his wife and sons.

Inspector Michael Collins, on behalf of An Garda Siochana, thanked Noel for his 20 years service that he has provided to the State in his role as State Solicitor in Leitrim.

“He has worked hand in glove with the Guards. He has been a colleague and a friend to us all, a man you went to for advice,” Inspector Collins said.

“Any time anyone picked up the phone to Noel he would have a quiet word for everybody. It didn't make any difference about your rank in An Garda Siochana, he would give them the time and help them out,” he added.

On a personal level, Inspector Collins said he has known Noel for 12 years and he has always been very helpful to him. He wished him the very best in his retirement from the State Solicitor's role and also the very best to his family.

Geraldine Cornyn, Manager of Carrick-on-Shannon Court Office, on behalf of herself and her colleagues, said she wished to be associated with the sentiments expressed by the previous speakers. 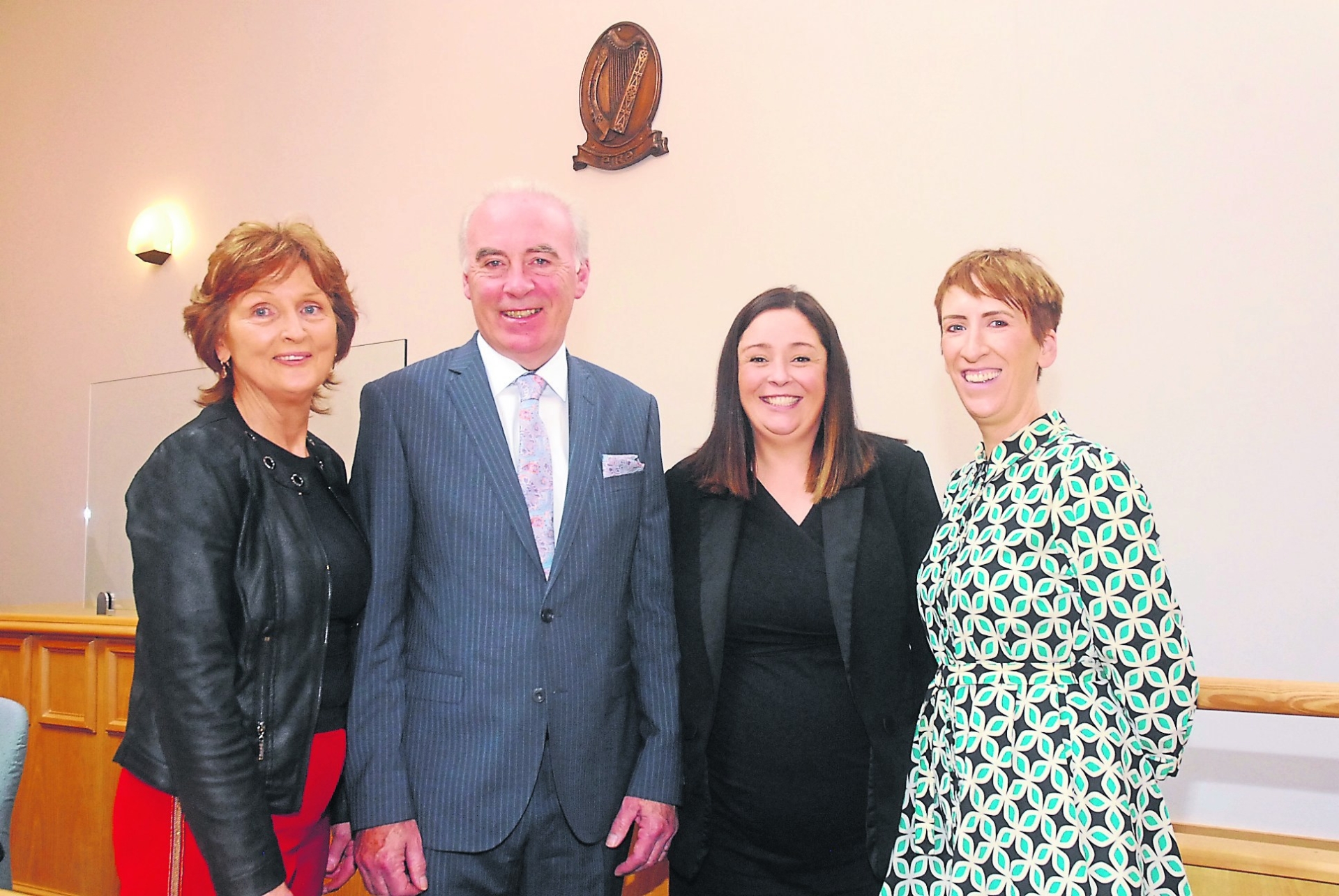 “I have known Noel for a long number of years and it has always been a privilege and a pleasure to have such a good working relationship,” she said.

She described Noel as “professional, courteous and always a complete gentleman to deal with.”

She added that he was always willing to assist in any way possible to help make the criminal lists run smoother, especially in the Circuit Court, and that was very much appreciated.

Geraldine extended her very best wishes to Noel and his family and added that hopefully he will have lots of time for his talents and hobbies, including his cycling.

Judge Sandra Murphy described Noel Farrell as “an excellent lawyer of the utmost integrity and professionalism.” 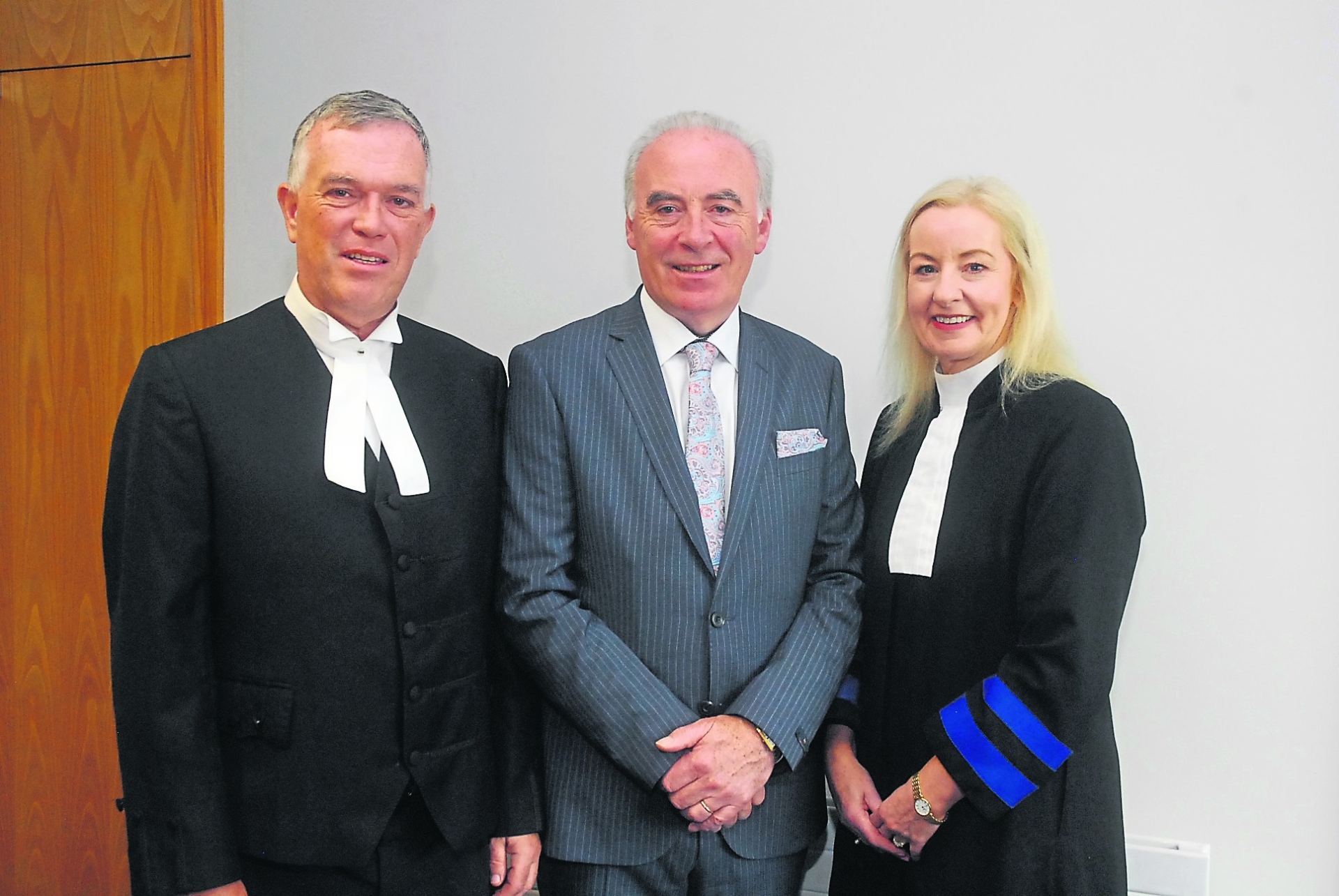 “He is a highly skilled advocate. He is an extremely calm and fair-minded lawyer while bearing the burden of state prosecution in a very skilled and professional manner,” she said.

“Listening to him in court, no word is wasted, yet no word is spared, everything is meaningful and has a purpose,” she added.

Judge Murphy said solicitors are officers of the court and court would not be able to operate well if it did not have its officers .

“Noel Farrell, in my view, is the epitome of an officer of this court,” she said.

“But for every loss there is a gain, and the gain is to Mr Farrell in his family life and his own personal life and I hope he gets the health and happiness to enjoy that gain,” Judge Murphy said before wishing him a very happy and successful retirement. 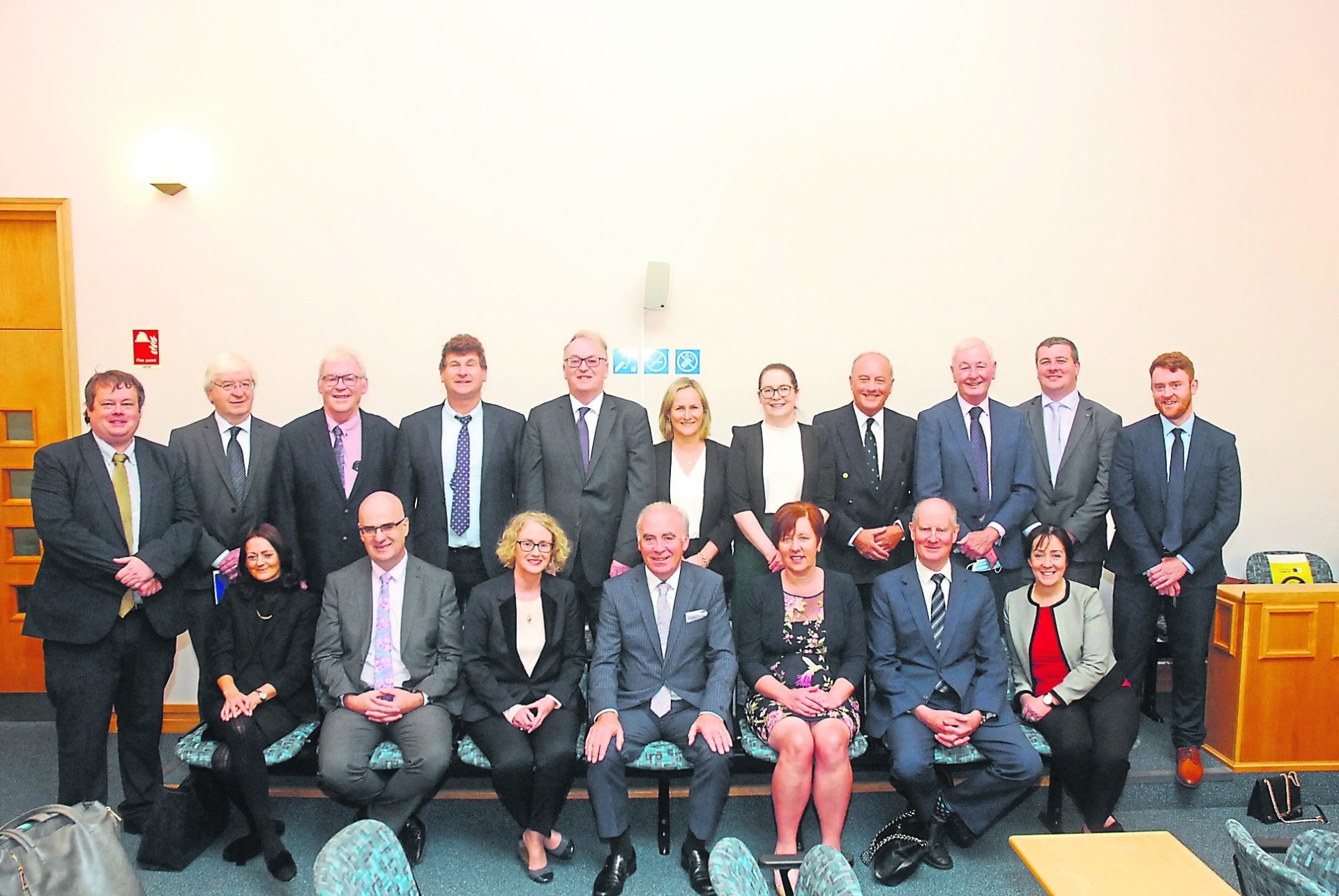 Noel Farrell thanked everyone for their kind and thoughtful comments and took the opportunity to thank each of the speakers in turn.

He described what was said as “humbling words” and quipped that he thought perhaps he had strayed into the wrong court and the words were intended for someone else.

Outlining his career as State Solicitor since he was appointed in 2002, he said he found his feet gradually, he found his voice and adapted to the position.

The big decisions, he said, are made by the DPP and her staff, the small decisions rest locally.

“A State Solicitor has to be prepared to make those decisions and be prepared to stand by them and that is one of the reasons they are appointed,” Noel said.

A native of County Leitrim, he said he was honoured to serve in the county and have the trust of so many people, trust, he said, that has to be earned.

“We do come into a lot of privileged and confidential information, information that doesn't see the light of day for one reason or another, and you can't help being struck by reading about people's lives, the most intimate things,” he said.

“You simply have to stay out of public discussion in public places,” he said.

“We may seem a little odd but that's the price you have to pay,” he said, remarking that of course you had to also stay away from social media platforms.

“I am astonished at what people publish on social media,” he said.

“I am not on it but I see it on garda investigation files, the madness of it, the viciousness of it. Where does this stop?” he asked.

Noel wondered if there could somehow be restrictions on such platforms because of the damage that is being done.

“I wonder what the next 20 years is going to bring. People have no concept of the written word and how it lasts forever,” he remarked.

Noel paid tribute to his “long suffering partner” in practice, Hugh McGarry, the great staff in George Lynch & Sons and in particular to Dearbhla Noone.

He also paid tribute to the press, the Leitrim Observer and all local newspapers.

“You do such an important job. The press have a very important function in bringing to life that which the constitution demands, that justice is administered in public,” he said.

Last and by no means least, he thanked his wife Anne for her love and support down through the years and that his three sons were present to share the occasion with him.