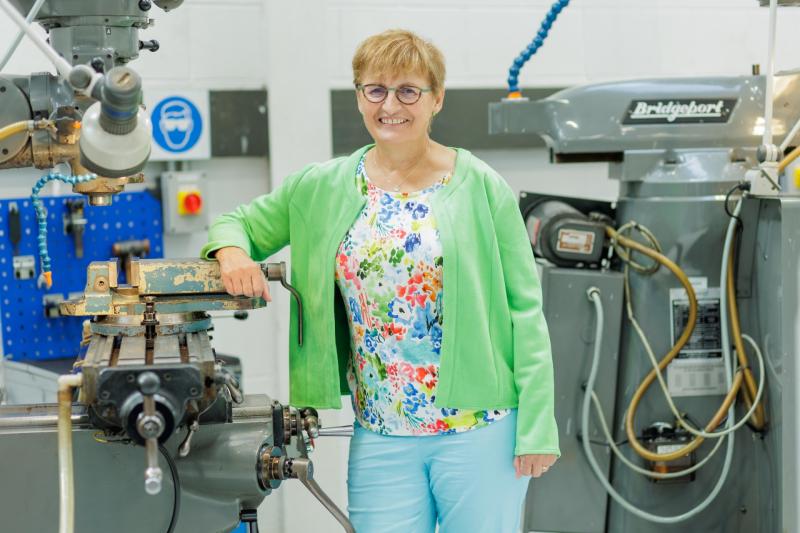 A new Head of College at ATU Sligo has been announced following the retirement of Dr Brendan McCormack on Wednesday (31st August).  President of ATU, Dr Orla Flynn, announced last week that Una Parsons, Head of Faculty of Engineering & Design at ATU Sligo, would take on this additional role.

In making this announcement, President of ATU Dr Orla Flynn said, “I wish Úna the very best as ATU Sligo’s Head of College. She is a highly respected engineer and academic who has experienced ATU Sligo initially as a tool-making apprentice in the 1970’s, then later as a Head of Department and most recently as Head of Faculty. I am grateful to Úna for now accepting the additional duties of Head of College for an interim transitional period.”

Accepting the new responsibility, Úna Parsons said she was looking forward to the challenge ahead: “I very much look forward to this role and working with everyone over the coming months.   I really want to help make the ATU integration a most positive experience for staff, students and the community in the Sligo region.”

The Dublin native did her apprenticeship block release in Sligo forty-five years ago studying the trade of Toolmaking at what was then called Sligo Regional Technical College.

She was awarded a scholarship by Braun AG to continue her studies in Northeastern University in Boston where she graduated as a mechanical engineer in 1984. She later did her Masters Degree in Advanced Manufacturing Systems with Brunel University in the UK.

Since then Úna has travelled the world in various global management positions working in the manufacturing industry across Europe, the USA, Mexico, Hong Kong and China.

An award-winning Chartered Engineer, Úna has worked as Industry Director for Engineers Ireland and was CEO of the Crafts Council of Ireland before taking up an academic management position in ATU Sligo in 2012.

Úna is a Fellow of Engineers Ireland and in the last year was conferred with the distinction of Fellowship of the Irish Academy of Engineering.

Úna is deeply passionate about education and has been instrumental in the growth of the Faculty of Engineering & Design in ATU Sligo over the last decade.

The faculty team of over 200 staff have developed many new innovative programmes that resulted in growth to over 4,000 students across full-time, online and apprentice streams.

She will continue in her role as Head of Faculty of Engineering and Design while fulfilling her duties as Head of College of ATU Sligo.

Dr Brendan McCormack retired on Wednesday (31st of August) after 24 years service.  Since he arrived in 1998 he held key senior roles during that time, including Head of School of Engineering (2001-2006) and the Head of Academic Affairs (Registrar, 2006-2014).

He was president of IT Sligo from September 2016 until March 2022 before the formation of ATU in April this year when he then served as Head of College for ATU Sligo.

Dr Brendan McCormack said at his recent retirement function: “It was truly a pleasure to work with you all.  I very much enjoyed my 24 years here and I feel privileged to have had the opportunity to lead this organisation for part of its life as an educational institution.  As I hand over the Sligo baton I really believe ATU will grow and flourish in many new directions over the next decade and more.”

The University community extends thanks to Dr Brendan McCormack for his service and wishes him a long and healthy retirement.