RACING: Your guide to Saturday’s action at the Galway Festival 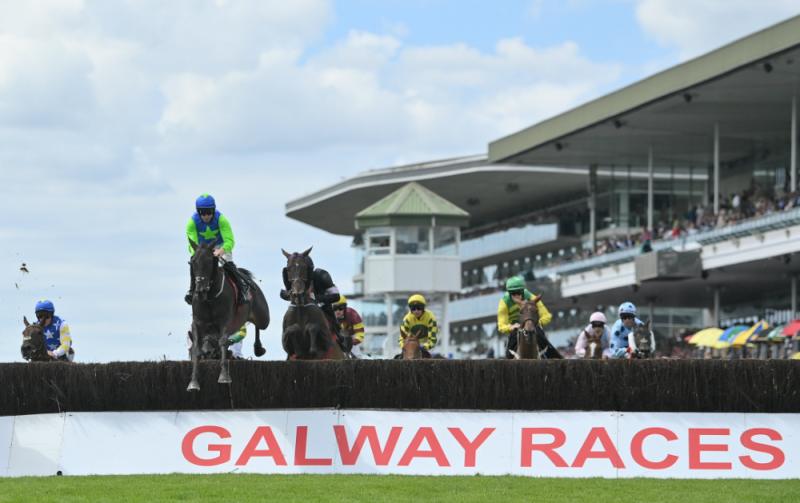 The Galway Festival continues in earnest on Saturday afternoon with a competitive eight-race card at Ballybrit. PIC: Sportsfile

The Galway Festival continues in earnest on Saturday afternoon with a competitive eight-race card at Ballybrit.

The action gets underway at 2.00pm and concludes at 5.55pm. Ground conditions at the track see the Jumps course as Good and the Flat course Good to Yielding. We have previewed the pick of the action and you can find the latest prices at Boylesports betting odds

The undoubted highlight on the card is the €110,000 Boylesports Handicap Hurdle at 2.30pm over two miles and seven furlongs. Boothill is a fascinating British raider having looked an extremely smart prospect at one stage for Harry Fry. He arguably has failed to go on over timber, but did shape with promise when second to Beauport at Uttoxeter back in March.

Of the domestic runners, Finest Evermore is a fascinating runner for Willie Mullins. She won her first three starts for Cloustton maestro, but has since finished third and fourth respectively in pattern events over timber. She does remain an interesting runner, alongside stable companion La Prima Donna. She was second in a competitive handicap at Fairyhouse in April, before filling fifth in another similar event at the Punchestown Festival. She has since gone to land a maiden hurdle at Tipperary in read style and is clearly open to further progression. Mullins also has top-weight Whisky Sour who struck at Cork earlier this month, but needs to bounce back having finished eighth at Galway earlier this week.

Fils D’oudairies is also an interesting contender on debut for Gordon Elliott. Formerly trained in Ireland by Joseph O’Brien, he subsequently moved to Nicky Henderson and ran three fine races in defeat at Ascot, Aintree and Punchestown. It will therefore now be fascinating to see how he gets on for his new trainer in this event.

Digby looks a gelding on the up having won in good style at Fairyhouse in April and he also has to be considered given he shaped with promise when third stepped up to three miles and one furlong at Ballinrobe in May. Ambitious Fellow was successful at both Punchestown and Roscommon already this season and despite continuing to rise in the handicap, he is another player along with Hallowed Star who remains unexposed over hurdles, but could only muster fifth in a contest at Galway earlier on this week.

The €18,500 Maiden at 3.05pm sees Aidan O’Brien look to have an interesting runner in the shape of Hiawatha. A €1.2 million full-brother to Group One scorer Luxembourgg, he caught the eye in defeat at Killarney last time out where he looked green under pressure, but continued to stay on in gutsy style having been short for room at a crucial stage. He looks the type who will only improve with racing and he is clearly one to note. €360,000 purchase Agartha is a half-brother to Group Two scorer Agartha and is one to note for Joseph O’Brien, given he is owned by his sister Ana. Jim Bolger’s Homebred Serious Challenge was third on debut at Galway earlier this week and is another to note in this event.