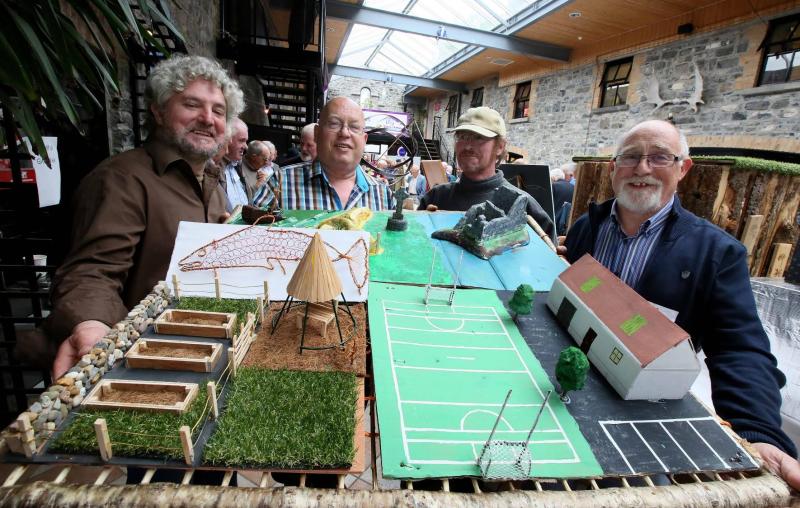 The world’s biggest men’s sheds crafts exhibition took place at Belvedere House and Gardens on Wednesday, June 13. The Topline Shed Series saw men’s sheds from throughout Ireland including the Kinlough Men’s Shed compete for a top prize of €2,000, awarded to the winning entry by a panel of judges headed by Ireland rugby legend Donncha O’Callaghan.

The Shed series, run jointly by Topline and the Irish Men’s Sheds Association, took place in the spectacular setting of Belvedere House & Gardens in Mullingar. A total of 44 entrants, representing 23 counties, were shortlisted from an initial field of almost 100.

Entrants were invited to reflect upon their shed’s place in its community, and this theme inspired entries that ranged from the thoughtful and elaborate to the quirky and frivolous. Donnacha O’Callaghan was assisted in his judging endeavours by Mairéad Lavery of the Irish Farmers Journal, Éadaoin Keane of Topline, and Barry Sheridan, CEO of the Irish Men’s Sheds Association.

Rostrevor Men’s Shed, Co. Down scooped first place, and Donnacha O’Callaghan was effusive in his praise for the winning entry: “I have visited a number of Men’s Sheds over the past few months and I have been blown away with the camaraderie that you find in each shed. In my opinion it’s the closest thing to a team dressing room. To work and share stories and life experiences - shoulder to shoulder is something to be encouraged”.

Rostrevor Men’s Shed, Co. Down entry was called ‘Shoulder to Shoulder’, which included a handmade construction of the island of Ireland with each individual county handmade. 11 airplanes which dotted around their creation symbolises the countries where all the team members are from in the Rostrevor Men’s Shed. A handcrafted pair of gloves, a Topline branded tea cup and a scone is a nod the open welcome each member receives when they join the Rostrevor Men’s Shed, receiving their very own pair of gloves to get stuck in with the rest of team and that the kettle is always on for a cuppa and a chat.

The €1,000 prize for second place went to Cooley Peninsula Men’s Shed, meanwhile, the People’s Choice award, chosen via a public poll on Topline’s Facebook page, went to Killoe Men’s Shed of Co. Longford. Their entry attracted a remarkable 1,400 “likes”. In total, almost 10,000 votes were cast, with sheds throughout the country mobilising support from their communities.

All prizes were supplied by Topline DIY as part of a broad-ranging partnership with Irish men’s sheds. The partnership, launched this spring, has seen Topline supply sheds with an extensive range of DIY equipment to assist in their community projects.

Eadaoin Keane, Head of Marketing at Topline said; “Since the launch of the partnership, I’ve been hugely impressed by the skills, craftmanship and creativity of Irish sheds and their members. This competition has really put those skills to the test, but it’s also been moving, meaningful and, above all, fun”.

Barry Sheridan from Irish Men’s Sheds said of the Shed Series competition; “This has been a massive highlight of the year to date. We take every opportunity we can to bring sheds together at a national level, and this event, with its focus on creativity and community, is as good as it gets. The creativity on show speaks for itself, and we’re delighted that Topline are helping us give it the spotlight it deserves”.

The Shed Series final took place during Men’s Health Week, and, appropriate to the occasion, free health screening and walks of the beautiful Belvedere House and Gardens were available on the day, provided by the Irish Heart Foundation and Get Ireland Walking respectively.

The Shed Series event caps a memorable fortnight for men’s sheds in Ireland; on Thursday June 7, the Irish Men’s Sheds Association was honoured with the European Citizens’ Prize, a prestigious award handed out by the European Parliament.