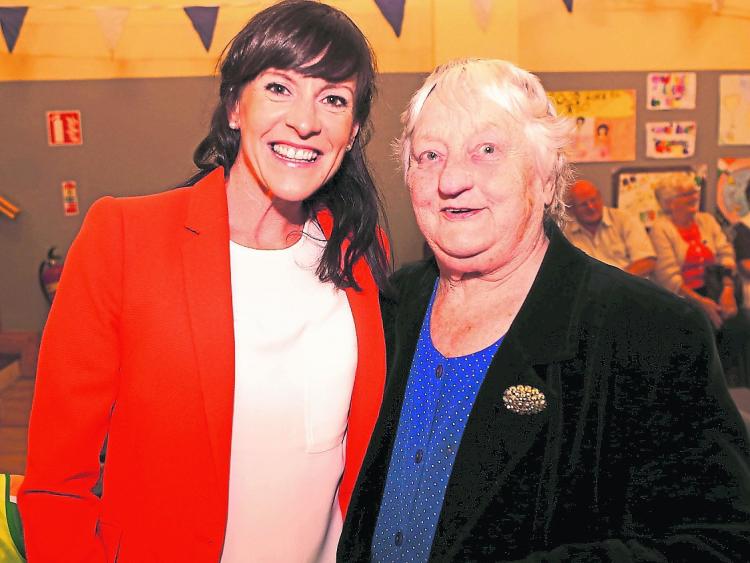 The queen of Kinlough is dead. Rest in peace, Muriel Kerr.
Muriel was one of those characters who made you wonder what wonderful confluence of genes, experiences, and influences came together to produce such a woman. If such alchemy could be bottled, every citizen of this country should receive a good dose of it at birth.
Muriel was an example of citizenship in a republic. She was of the people, for the people, and by the people. At the age of 88-years-old she was still at the heart of all things good happening in our community, maintaining the habit of a lifetime. It’s no coincidence that her energy and drive lasted well into the final days of a life well lived. The significance of social cohesion in extending life expectancy was highlighted by research conducted by Dr Reginald Wolfe on the exceptional population of Rosetta in Oklahoma.
Rosetta was settled by a group of Italians from a place of the same name in Italy. They brought with them their culture, pastimes, families, and even their town planning. Researchers exploring the cause of their prolonged health and happiness found that it was as result of their social cohesion.
They ate together, the worshipped together, the socialised together, they lived three-generations to a house, and they were members of multiple community groups that sought to serve the needs of their town. Muriel was our Rosetta, the social glue of our community.
Within it she wove a patchwork quilt of people’s lives, stories, and memories, with the same care and attention she and her guild sisters of the ICA brought to their beautiful crafts. (Muriel was a proud former president of the Leitrim ICA and a lifetime member).
On the first day I attended our local Church of Ireland in Clontarf a few years ago, I was chatting with some of the parishioners afterwards. The organist proudly declared that he has been tickling the ivories for 50 years. “In our church you’d be considered a whipper-snapper,” I replied. Muriel played the organ in Kinlough COI for 74 years. She was the musical accompaniment on the biggest occasions in the lives of generations of local people. But she was so much more than just an organist. She was at the heart of all such celebrations: singing, laughing, joking, connecting.
She was the constant of Kinlough. But she also rambled far and wide with her great friend Peggy Kelly. She played organ in more than 30 churches across the northwest, both protestant and catholic, with Peggy leading the singing.
Fr Keoghan in Kinlough brilliantly christened the pair ‘The Spice Girls’. Peggy will miss her greatly. As will my mother. They were great friends. Very different people in many ways, but they shared a great sense of humour. Years back, Mum bought Muriel the first of many joke books. She was so taken by it she wrote the author, a rector in England, to compliment him on his work.
A prolific letter writer, she brought the same craft to her written word and penmanship as she did all aspects of her life. I was fortunate enough to receive two such letters in my lifetime. I’ll cherish them. In true Muriel fashion, she was still very much front and centre at her funeral service in Kinlough on Sunday.
She had written two letters to be read on the occasion, thanking her family for their love and care and indicating that any monies donated to the church in her memory be used to buy a tape recorder to replace her playing! (Norma Rowlette filled those considerable shoes at the service).
Muriel played at the christening of my cousin, the Canon Noel Regan, who contributed to the service in this his 70th year.
So many people have so many memories of Muriel (who was predeceased by her beloved husband Walter) that her sons William and Raymond and their families can rest assured she is gone but not forgotten. I was going to write ‘gone but never forgotten’ but all things move on and her legend will eventually fade. Just like the lives and memories of the generation she represents. She was a strong link to ‘the way things were,’ to the days of her mother’s shop on Main Street.
For this reason, we have a duty to not just remember and honour Muriel in words, or memories, or our singing at church. We have a responsibility to live the ideals of citizenship she represented. To realise that if the community life we all want is to come about then we all have something to contribute. Muriel’s death will leave a vacuum in our community and we all must strive to fill it with the tireless optimism, conviviality, and humanity that were her trademark. And some devilment. She loved a bit of that too, hence why herself and my father were such good friends.
Muriel would have been 89 years-old on May 14. I popped in to ramble with her a couple of years ago when home from Dublin. Chatting, she paused. “You know Colin, inside I still feel like I’m 25.” I wouldn’t have put her a day past 21.
As Albert Dawson said addressing the large crowd that came to pay their final respects on Sunday: ‘She wasn’t just a good woman, she was a great woman.’
Rest in peace. Ní bheidh a leithéad arís ann.