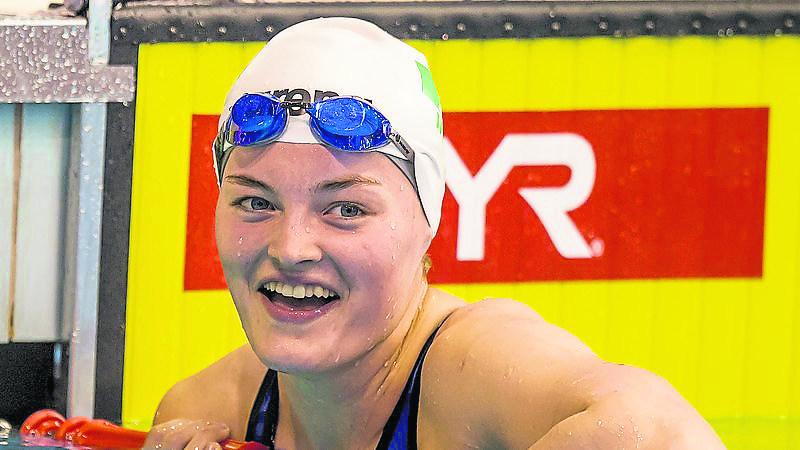 Taking place at the Etihad Arena, the Championships are World Swimming’s finale of 2021 and the culmination of the short course (25m pool) season. Sligo’s McSharry, based at University of Tennessee in the US, set a new Irish Senior Record of 29.65 in the 50m Breaststroke Semi-Final and bettered that in the final, clocking 29.59. She finished fourth, touched out of the medals by 0.04s, with Israel’s Anastasia Gorbenko taking Gold, Italy’s Benedetta Pilato in second and Sweden’s Sophie Hansson finishing third.

McSharry said: “I can’t but be happy with a PB, and I progressed through the rounds, which is great to see of course. Fourth is gut-wrenching, but if you look at it the other way, I was fourth. That’s not horrendous. It’s definitely something to improve on and I do love racing the 50, it sets me up really well for the rest of the week, and I can’t dwell on it now. I just have to move on and do better later on. Anyone of those eight could have touched the wall first. With any 50, that’s just the way it happens. Any little thing can go wrong. At Europeans I managed to get a medal from lane eight. The three that got it today were just the best in the moment.”

McSharry made her Olympic debut at the Tokyo 2020 Olympics this summer and became Ireland’s first Olympic swimming finalist in 25 years when advancing to the 100m Breaststroke Final. She will compete in that event at this competition on Monday, with the 100m Individual Medley on Saturday’s schedule for her, and the 200m Breaststroke set to conclude her Championships on Tuesday. Also competing for Ireland in Abu Dhabi on Saturday are 400m Medley Silver Medallist Ellen Walshe in 50m Butterfly and Calum Bain in 50m Freestyle. The heats session begins at 05:30am Irish time and can be followed via fina.org.