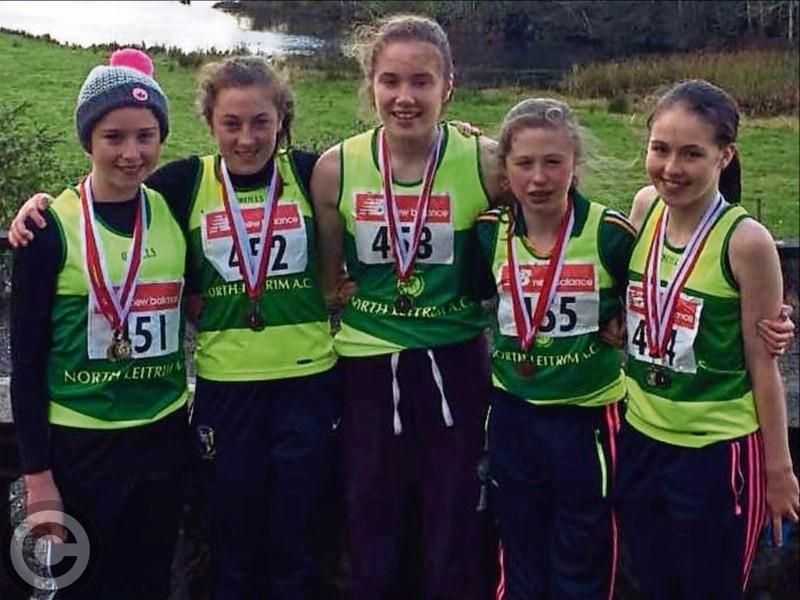 There was gold on the double for North Leitrim as Ryan Owen claimed provisional victory in the Connacht Novice Cross-country League and the club’s U15 girls won the team race.

Ballinamore’s Ellie O’Rourke again underlined her good form with an excellent second in the U15 Girls race, leading the County team to bronze medals in the inter-county race while Fiona Langan from North Leitrim won silver in the Novice women’s league.

The Leitrim U11 boys team, led by Drumshanbo’s Darragh Lee, claimed a brilliant bronze in the inter-county race while Carrick AC’s Anna Corcoran and North Leitrim’s Niamh Carolan, Sarah Brady and Aisling Cullen all qualified for the Connacht teams.

Ellie O’Rourke was Leitrim’s only individual medalist on the day as she finished a good second behind Irish Schools champion Saoirse O’Brien of Westport in the U15 Girls race. Despite being a year out of her age group, Ellie was the only athlete to get near O’Brien who finished over 100 metres clear of the Ballinamore AC runner.

However, Ellie was a huge distance clear of the third place runner as she was followed home by North Leitrim’s Sarah Brady in eighth with Aisling Cullen ninth. Ella McDaid just missed out on the Connacht team in 13th with Lara Mulvaney Kelly finishing 24th to round out the scoring team with Caoimhe Hughes 30th.

North Leitrim claimed the victory in the team contest by the narrowest of margins, their total of 54 points just one ahead of Galway City Harriers and three ahead of Swinford to pick up their second Connacht gold in the space of a week.

Carrick AC’s Anna Corcoran was the next highest finisher as she took 9th in the U17 Girls race despite being a year out of her age group while clubmate Fiachra Henry finished 18th in the U17 Boys.

Niamh Carolan followed up her good run in the even ages with a strong 10th in the U13 girls with North Leitrim’s Sinead Barrett & Abbie Moffitt 30th & 37th and Mohill’s Sarah O’Beirne 40th.