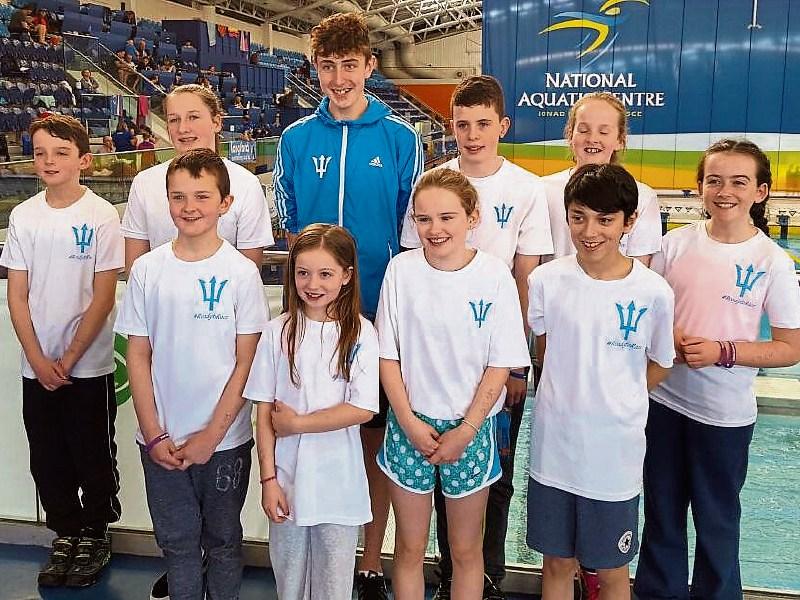 Members of the Trident Swim Club pictured after the gala at the National Aquatic Centre.

Trident Swim Club’s members have turned in some top performances both at the recent Connacht Championships in Galway and at the Leinster Gala last weekend at the National Aquatic Centre in Dublin.

The 200m Individual Medley gave Wiktoria another chance to shine, and she didn’t disappoint, putting up a time of 2:44.33, knocking over 4 seconds off her previous time. Her final event, the 50m Freestyle was another PB of almost 3 seconds, down to 30.42.

Division 1 swimmer Diarmuid Sutton recorded his first podium finishes of the season, earning a gold medal in the 50m Butterfly in 30.13 and silver in the 200m Individual Medley, with a time of 2:34.49 and then took another gold in the 50m Freestyle where he recorded a new pb of 27.38.

Diarmuid was also exceptionally strong in the 200m Freestyle, with another PB of 2:16.04.

Trident took a team of 10 swimmers to the National Aquatic Centre last weekend, some of whom were competing in their very first gala, and the team came home with a record-breaking 19 PBs.

Diarmuid Sutton pulled off another amazing PB in his final event of the day, the 100m Butterfly, knocking five seconds off his entry time with Wiktoria closing the day with a strong performance in the 100M Backstroke on 1:18.62.

Congratulations to all swimmers who took part in the gala and big thanks to all the parents for their support. All membership enquiries should be directed to Trident’s Head Coach, Samantha Weaver, on 086 859 4497.