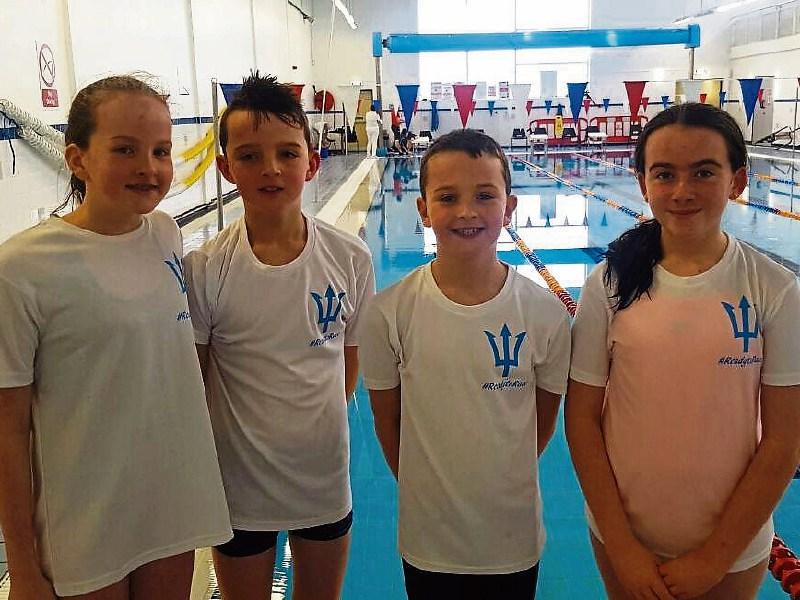 Trident SC members Aoibhe, Cormac and Eoghan Rynn and Ella McCrann who all competed in Roscommon.

Trident Swim Club members were in action in Dublin and Roscommon over the last week as the club goes from strength to strength.

With another successful weekend of swimming behind them, Trident Swim Club are dominating the news at the moment and the club’s success can be measured not only by its outstanding results in the water, but by the number of children currently waiting to join its ranks.

Last weekend saw members competing locally at the Coman’s Swim Club Gala held in Roscommon and at the Christmas Cracker Gala at the National Aquatic Centre in Dublin.

Swimmers Ella McCrann, Aoibhe, Cormac and Eoghan Rynn all travelled to Roscommon with Ella recording significant PBs in the 50m backstroke (53.29) and breaststroke (1:02) and putting in a strong swim in the 50m freestyle (46.08).

Younger brother Eoghan was impressive in the 50m backstroke coming home in a time of 50 seconds and again in the 50m freestyle in 42.53.

Meanwhile up at the National Aquatic Centre, swimmers Molly Mulvey and Rachel and Ben O’Connor were making an impression.

Despite being one of Trident’s youngest members, Molly narrowly missed out on the medals in both of her events, coming fourth in both the 25m freestyle in a time of 21.66 and the 25m backstroke in a time of 24.07.

However, top marks for the weekend have to be awarded to Trident parent Natasha Dunne Mulvey for her efforts in the Parents’ 50m freestyle event Competing in a male-dominated field, Natasha held her own and pulled in a second place for her efforts.

Trident will continue to train until Wednesday 21 December which will be an open session for all swimmers and will also be continuing with some training over the Christmas period subject to pool availability.

The club is currently working to try to accommodate all new membership requests and will be in contact with parents in due course.

For more information on competitive swimming, please contact Trident Head Coach Samantha Weaver on 086 859 4497 who will be happy to give advice and encouragement. find us on Facebook at Trident Swim Club Carrick on Shannon.