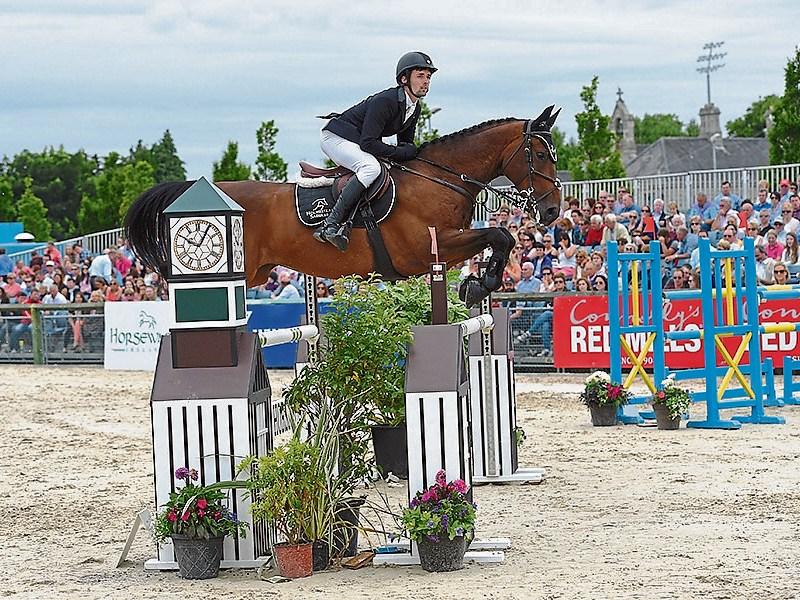 A fantastic shot of John Mulligan on board 5 year old Mohill Spring, home bred by Mohill Trebble C in the RDS during the year.

It is brutally hard to choose between two loves but when it came to the choosing between showjumping and gaelic football, John Mulligan found there was no choice at all.

The former Leitrim and Mohill footballer was the joint winner of the Senior Sport Star Award at the Leitrim Sport Star Awards when it was his achievements in the showjumping world that saw him recognised.

Ironically, John shared the award with a former Mohill team-mate, Eanna Madden, who had also forsaken gaelic football for pursuits in another sporting arena.

But as difficult as the decision was, John has no regrets - “It is hard to break away from it really but I just found that is where my heart is. I grew up around horses, my whole family are big into horses and they were a great support for me.”

And it is quickly obvious that the influence of family is strong in John’s sporting career as the equestrian star regards his exploits as a whole family experience - “My father owns a couple of very nice horses which is a great boost, my brother Tadhg does riding and helps me out at the yard. Plays a bit of football too, he is alright, he’s not bad. And my three sisters also have a big interest which is a great help.

“My Dad does a lot of work, every morning he is up and he is feeding them and he is doing the behind the scenes kind of work, it deserves a lot of credit really and without that, I wouldn’t be able to get where I am going.”

Sharing the award with Eanna Madden was another special local touch but John was delighted just to nominated - “A great achievement, it is great to be nominated first and foremost and to be picked alongside Eanna was a great achievement, I’m very happy and pleased with it.”

But the equestrian world and Showjumping in particular must seem a million miles away from the family home in Killamaun Mohill, particularly when “MHS Going Global”, ridden by Greg Broderick at this year’s Olympic Games in Rio de Janeiro, was being sold to Greek shipping heiress Athina Onassis for a figure believed to be between €10 and €12 million.

And it is a top gap for an aspiring show-jumper like John to bridge - “There is a big money at the top, it is just hard to get there, it is like any other sport. There is a lot of mediocre horses and it is not that easy to find the really, top, top horse.

“It is all about looking and we’re going to try our best to find a couple and maybe get up to the top some day. Eventually, I do see myself trying to get to the place where Cian O’Connor and Bertram Allen are.

“It was a great year this year. My aim for this year was to get to the RDS and I was delighted, I actually got two horses qualified for that. It was a bit of a surprise in a way but I was delighted to get there.

“I won a big class up in the Meadows, the 5-year-old Irish Sport World Class and that was a great class to win. Lanaken now, I hope to qualify in Belgium and head off and represent Ireland.”

All athletes face the battle to be fit, to keep themselves mentally strong and to peak for the big occasion but John faces an additional challenge as there is a large animal underneath him that often has to be coaxed, cajoled and encouraged to big performances.

John won the final leg of the 2016 Irish Sport Horse Studbook Showjumping Series at The Meadows. In the 5 Year Old Final, 17 horses made it through to the jump-off. Winning the class was John Mulligan and Mohill Spring (ISH), who jumped double clear in a time on 29.58 seconds.

That came after qualifying for the RDS earlier in the season with two horses and it justifies the decision to concentrate on the sport full-time - “I finished College, I was three years in Athlone studying a Bachelor of Business which was kind of a plan B but I always wanted to get back to horses.

“I’m in Mohill the last year, I am at this full-time, it is a big commitment, it is a costly kind of commitment but as long as you have the good backing, it makes it worthwhile.”

And good backing is what John believes he has as the Mohill man aims to join the sports very best - “I already have a couple of pretty good owners, they’ve got great belief and trust in me and my family and what we can do with them. It is just now a matter of time now and just bringing on my horses and I hope we get to the top really soon.”