A year to remember for Kinlough's Breege Connolly 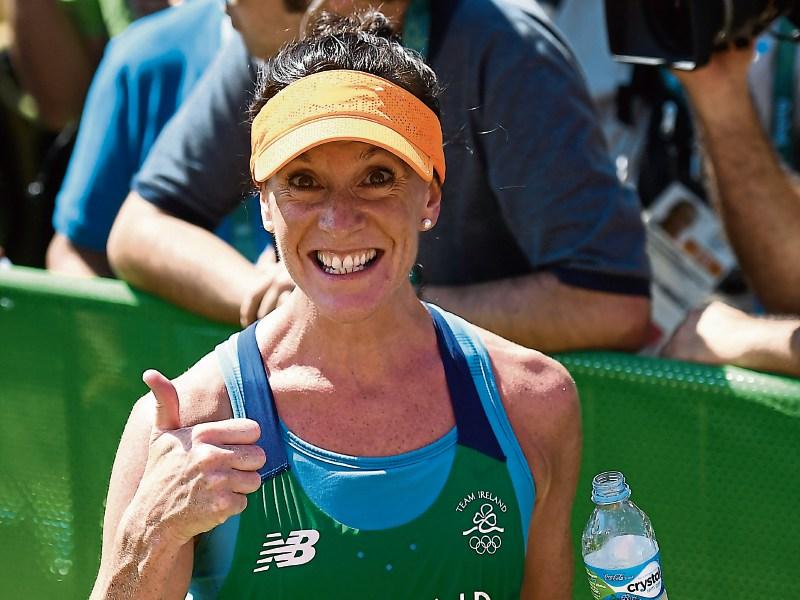 Recognition from your peers in any walk of life is important so when Breege Connolly was greeted with a standing ovation when she won the Overall Leitrim Sport Star of the Year Award, you could sense exactly what it meant to the Kinlough Olympian.

“I’m delighted, I really am delighted,” Breege told the Observer, “because there are so many achievements in different arenas and I know I got to the Olympics but I didn’t know if that would be enough so yeah, it really tops off the year, it tops off a wonderful year.”

A year to remember saw Breege represent Ireland in the Rio Olympic Games when she ran in the marathon and after receiving the Award, Breege took some time to sit down with the Observer and look back on a hectic, but incredibly memorable 2016.

“It was a great year. It was a long year in parts, from January through to April, because that was when the girls who were competing against me were trying to get the time for the Olympics. I had made my decision to compete early out and that was my choice and I stuck to that. In the run-up to the selection I had to prove a bit of fairness and thank God it went in my favour.”

Having played the waiting game, Breege’s place on the Ireland team was confirmed on May 23 and her delight was made clear when she tweeted, ‘It's a once in lifetime kinda night in Leitrim. Selected to run for my country in the Olympic Games.’

Reflecting on that night when it became official that she would become an Olympian Breege recalled, “It was lovely because I was in Leitrim that night. In one sense it was a massive relief that I was going to get there and in the other sense it was so overwhelming because you knew the summer that was ahead.

“With the weather in Rio, training for a marathon at the best of times is no mean feat but with the weather and the humidity I had to factor all that in but I had support it was just making sure I asked the right people for it.”

Breege’s qualification for Rio made her the fifth Leitrim person to qualify for the Olympics after Eddie Leddy, Frances Cryan, Colin Griffin and Laura Reynolds but she acknowledged her place among Leitrim’s sporting elite is something she is only now beginning to fully appreciate.

“I didn’t really appreciate that. I suppose it is only now I am appreciating the enormity of it because I don’t think I could have allowed myself to think too far ahead. Even until you got there you’re always so tentative in case you get an injury or in case something goes wrong but when you get there you really appreciate it and value it.”

While the controversy of drugs and dubious judging decisions surrounding the Irish boxers and the whole Pat Hickey furore generated much publicity back home, for the athletes in Rio it was a great team environment to be involved in.

“It was really teamly,” Breege recalled. “I never knew anything about rowing, I never knew anything about boxing, I never knew how many rounds were in a boxing match so you become more involved. The hockey players were very good for team building because it was a whole team of lads and thank God we had them because they made up numbers as well. They definitely added spirit and the badminton player Scott Evans as well, everyone was really cheering everyone on.

“It was difficult to get to the stadium every day but your spirit and will was behind them, it was. I met Paddy Barnes and you felt bad for them because they hadn’t achieved what they went out to achieve.”

Focusing on her own event, Breege explained conditions in Rio were much better than she could have hoped for while preparing for the marathon but on the day of her race the soaring heat returned.

“Once you got going the weather wasn’t at the forefront of my mind. I saw my family before the start and then it was just making sure I ran a sensible race because there was an awful lot of drop-outs, I have never seen so many casualties in a marathon before. With every other marathon I had gone with a plan, a minute/mile plan,

“ I didn’t really have that for Rio. I had in my head a ballpoint that I wanted to be in or around but I wasn’t getting too carried away.

“I guess I was aware that the weather might play a part in the run and I suffered a bit of cramp in my leg at the halfway point, I think that was a wake-up call. It took me probably two miles (to get rid of the cramp). It was in my shin area, it probably took me two miles just to relax again.

“I think it made me a little bit uptight but then once I got back going … We had to do a lap of the course and once we did the third corner I was on my way home, even though it was only 16 miles you were on the straight for home then.”

Upon crossing the line Breege’s initial reaction was one of joy but she revealed she has yet to fully analyse her performance in Rio.

“It was just delight, thank God that it had all gone ok and I had handled the weather and the conditions. To be honest I haven’t really analysed my performance, my time, because I can’t change it and it was what it was. I think there were different battles to be fought in Rio - my whole family had travelled and I said to myself I wanted to be as fit as I could be towing the line in Rio and I felt that I was and then the rest fell into place. I was well off my personal best but I think that was just the way it was going to be.”

Having competed in the Olympic Games at the age of 38, Breege could have been forgiven if she was thinking of a quieter life in the years to come but when discussing plans for the coming year it quickly becomes clear that Breege has no intention of resting on her laurels.

“I took a really good break after Rio, I was exhausted and then I started back into work, my work were very supportive. I’ll enjoy the run-in to Christmas and in January I’ll hopefully get a little bit more structured about my training, hit races and if I can get personal bests in races I think it’s a really good indication of whether or not I’m ready to do another marathon but there is a lot there for the taking. You’ve got the worlds, the Commonwealth Games, if I decide to go down that route, but I want to do the best marathon that I can do.”

In order to do that Breege has an intensive training schedule which typically sees her run almost 100 miles a week!

“An average week for me would probably be 95 miles,” she explained. “Monday, Wednesday, Friday double runs and Tuesday and Thursday are session days, they are the days you focus on faster workouts. Your daily average is probably 12/13 miles and then at the weekend I would do a 22 miler and a Sunday relaxed run. Sunday is the day that you recover but there are no days off really. My trainers wouldn’t believe in the philosophy of a day off so I went with that.”

When asked how she feels about not having days off when she is in training, Breege insisted despite the intense schedule that has been mapped out for her, she will always listen to her body.

“I don’t know, I always had a day off before I met them. I think it actually worked for them so I guess it was up to me to follow it but sometimes if I feel really tired I will listen to my body regardless of someone saying to me this is what you must do or this what you should do. No one lives inside your own body so I know when I’m tired. It’s not being lazy, there are days when you’re lazy and decide not to run but it’s more fatigue. No day off could cause an injury but I’ll look ahead and hope for the best and hope that I can maybe achieve a faster marathon.”

With the hope of a faster marathon still clearly to the forefront of her mind would Breege consider another crack at the Olympics when the biggest show on earth rolls into Tokyo in 2020?

With a broad smile and a hearty laugh the reply was a brief one - “Who knows!”

Breege then deflected attention from herself with a message for other sports people in the county.

“There is lots of potential in Leitrim, that is one thing I do know, just forget about where about you come from. I know there might be only five Olympians from Leitrim but that’s still an achievement given the population of the county.”