Silver for Gerard, bronze for Eanna in Nationals 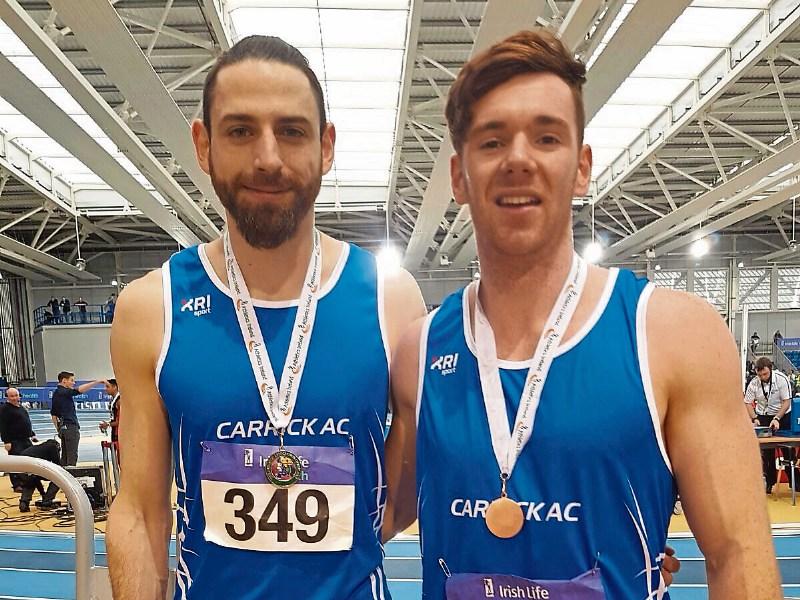 The double act of Gerard O’Donnell and Eanna Madden was in action again in Abbotstown as the Carrick-on-Shannon AC duo captured medals at the Irish Life Health Athletics Ireland Senior Indoors.

Competing in the magnificent new Sports Ireland National Indoor Arena in Dublin, Gerard won a silver medal in the 60m hurdles while Eanna claimed bronze in the 200m to reinforce their excellent indoor seasons.

Madden was first in action on Saturday in the heats of the 200m and the Mohill man cut an impressive figure as he cruised around the track to comfortably win his heat in a time of 21.89. Unfortunately, the time was surpassed by both David McDonald & Leon Reid, both of Wexford's Menapians AC, and Zak Irwin of Sligo.

Fortune shone on the Mohill man was he was drawn in lane four for the final which left his chasing the Wexford duo in the final on Sunday.

On Sunday, O’Donnell was first up as the hurdler was drawn in lane 5 for the straight final. Gerard got out brilliantly in the final but disaster struck when he hit the second hurdle hard, stalling his momentum and allowing North Down’s Ben Reynolds to establish an early lead.

Incredibly, O’Donnell managed to regain his momentum and finished strongly to take second in a time of 7.94 seconds, marginally outside his season’s best of 7.88. However, it was another in a series of consistent performances that saw O’Donnell break the eight second barrier regularly during the season.

Eanna was in the final race of the day and despite battling an injury suffered in the Irish Universities Indoors, the Mohill man turned in his second fastest time of the season, 21.66 to take third behind Reid and McDonald.

Reid, who has won medals for Great Britain at Junior & U23 level, was a clear winner in 21.08 with McDonald second in 21.51 with Eanna well clear of the chasing pack.

Also in action last weekend was a third Carrick AC athlete, Cathal McElgunn who ran a new indoor personal best of 52.41 in the 400m heats, knocking over a third of a second off his previous best.

Leitrim’s underage athletes get their chance to shine this weekend when the Connacht Indoor Championships are held at the AIT International Arena in Athlone.

The U12 and U13 age groups are being held today, Saturday, while Sunday sees the U14 to Senior athletes in action.

Action on the track gets underway at 10 am on both mornings and a long programme is expected. The timetable for both days is available on the Athletics Ireland website (www.athleticsireland.ie) under the fixtures section, simply click on the right hand side of the page to find the timetable for either Saturday and Sunday.