Lauren leads the way home in tough test in Abbottstown 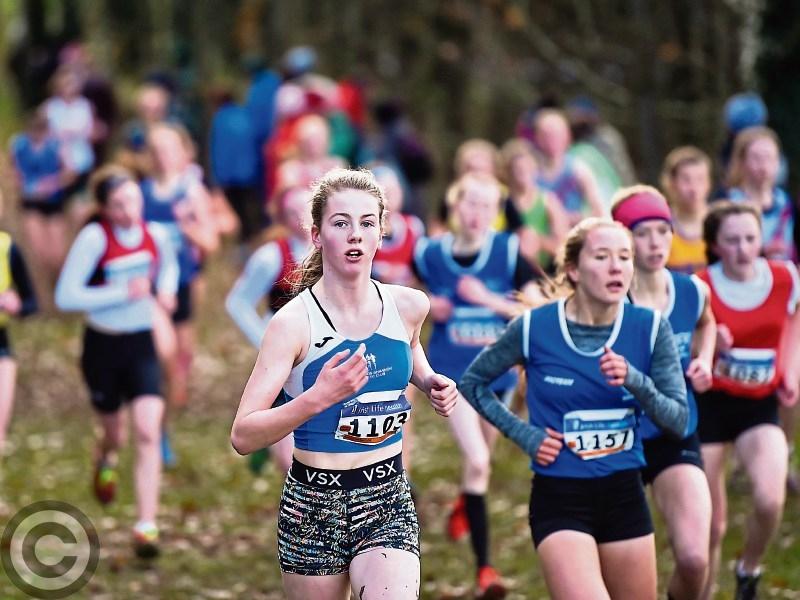 Carrick AC's Lauren Reynolds in the thick of the action in the Girls U16 4000m at the Irish Life Health Juvenile Even Age Cross Country. Photo by Sportsfile

Carrick AC’s Lauren Reynolds was Leitrim’s top performer at last Sunday’s Athletics Ireland Juvenile Even Age Cross-country Championships in Dublin, breaking into the top 20 in the U16 Girls race.

On a testing course and amidst some fierce competition, Lauren was joined by clubmates Patrick & Declan Kennedy and North Leitrim’s Niamh Carolan with top 30 finishes at the Irish Life Health sponsored event at the National Sports Campus in Abbottstown.

And there was another good result for the county when Kinlough native Teresa Doherty, nee McGloin, finished a superb eighth in the Senior Women’s race in the colours of Finn Valley AC from Donegal.

The Donegal runner was just three places off qualifying for the Irish team for the European Championships in what was a superb run as she led Donegal to third in the Inter-County Senior race.

For Leitrim’s juveniles, there were no medals but nevertheless some excellent performances and leading the way home was Carrick AC’s Lauren Reynolds who displayed nerves of steel to start slowly and work her way through the field to eventually finish 17th.

Reynolds was outside the top 40 after the first one kilometre lap but displaying great strength, she began to move steadily through the field and approaching the final 1,500m lap, was down in 22nd place.

Finishing very strongly, Lauren continued to pass runners right up until the 300m where she finished clear of her pursuers.

Lauren led home the Connacht team with fellow Leitrim athletes Aisling Cullen and Sarah Brady from North Leitrim finished 64th and 77th to finish as third and fourth runners from the province. Remarkably, all three Leitrim runners are a year out of their age group.

Next highest finisher came in the U12 Boys race where Carrick AC brothers Patrick and Declan Kennedy finished 26th and 28th, despite being a year out of their age group. The pair got off to a steady start and started to move strongly through the field over the second lap, engaged in a ding-dong battle with each other.

With the pair swapping positions with each other, Patrick’s finish carried him across the line ahead of his brother Declan with Ballinamore AC’s Mark Ahern finished 95th with Connacht taking fourth place in the Inter-County race.

North Leitrim’s double Connacht Champion Niamh Carolan attacked the U14 Girls race hard from the gun and was up with the leading runners in the early stages. The incredibly tough early pace in a very competitive race took a toll but Niamh showed great character to battle through to an excellent 28th place.

Waterford IT will host the Athletics Ireland Irish Life Health Uneven Ages Cross-country on Sunday, December 17, with a lot of Leitrim athletes due to compete.

Drumshanbo Athletic Club took on the running of Lough Key parkrun last Saturday by fulfilling all the volunteer roles on the popular event that is held each Saturday morning at 9.30 am. Despite the weather they were out in force with 32 volunteers on the roster. Majella Heffernan was Run Director for the race