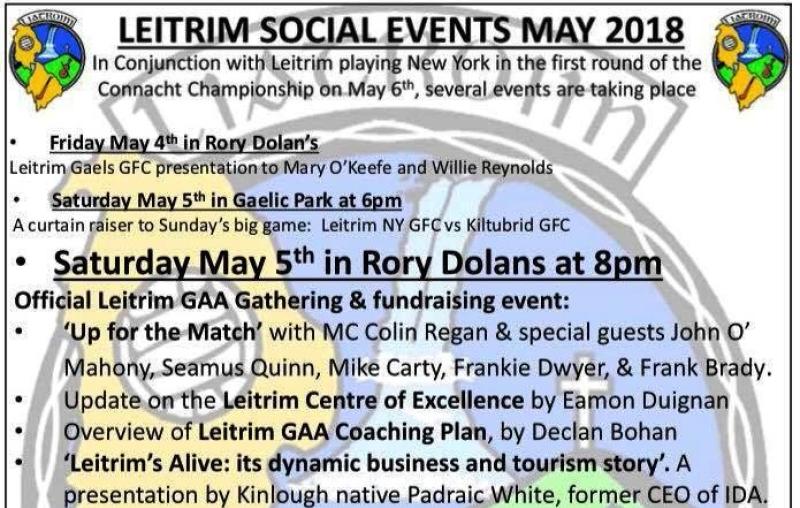 It looks like New York will be a home away from home for Leitrim people over the May Bank Holiday weekend with a plethora of events planned for supporters making the trip to the Big Apple.

Leitrim's Connacht Championship clash with New York in Gaelic Park is the centrepiece event but it looks like Leitrim people can't help but be in each other's company in the City that never sleeps with six different events scheduled for the weekend.

Leitrim Gaels get the weekend under way with their own special fundraiser and presentation event in Rory Dolan's on McLean Avenue in Yonkers. The event features a special presentation to Mary O'Keeffe and Willie Reynolds who were so instrumental in the fundraising drive that enabled the Gaels purchase their pitch.

On Saturday, Kiltubrid GAA Club will take on the Leitrim Club of New York in a friendly game in Gaelic Park, with the likes of former Dromahair player Sean Kelly involved in the New York club.

Saturday night also sees the official Leitrim GAA gathering and fundraising event in Rory Dolan's. Getting underway at 8 pm, the event will feature an "Up for the Match" with former Leitrim star and Leitrim Observer columnist Colin Regan acting as MC with contributions from Senior team selectors John O'Mahony and Seamus Quinn while Mike Carty, Frankie Dwyer and Frank Brady will give the views of the Leitrim exiles in New York.

Eamonn Duignan will give an overview of the Leitrim GAA Centre of Excellence, Leitrim County Board PRO Declan Bohan will talk about the Leitrim GAA Coaching Plan while former IDA chief and Kinlough native Padraic White will give a short presentation entitled "Leitrim's Alive and Kicking - its dynamic tourism and business story".

Entry fee is $30 which will also see you entered into a draw for All-Ireland tickets.

Sunday, of course, features the big match and incredibly New York GAA have a full programme of games that day with the first match, a camogie match between the New York Development Squad and Philadelphia throwing-in at 8.45 am with games between New York Development squads and Boston also on the calendar!

After the match, there will be a meet and greet with the Leitrim footballers at The Rambling House on Katonah Avenue in the Bronx at 7 pm while the Leitrim Senior team will stay on Katonah Avenue when they also visit Behan's later that evening for a fundraiser for the Aughavas and St. Joseph's Ladies Club, the event starting at 9 pm.

Monday will see J.P. Clarke's Saloon on McLean Avenue in Yonkers host the Leitrim team for a brunch/barbecue from 3 pm in what promises to be an action packed weekend.

For more information on the weekend's events, check out the poster below: 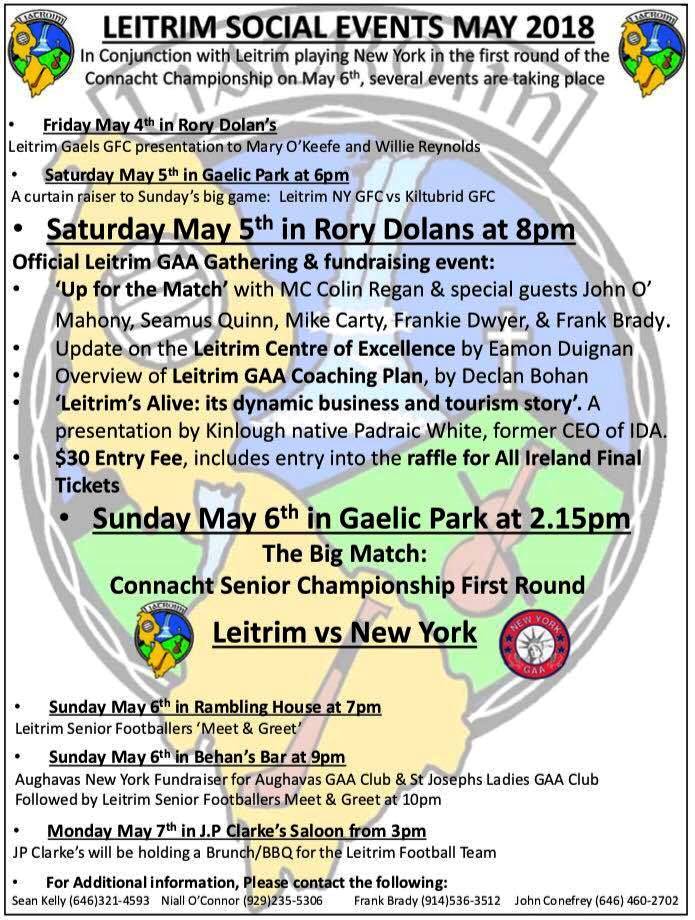