Déarbhla is only getting started 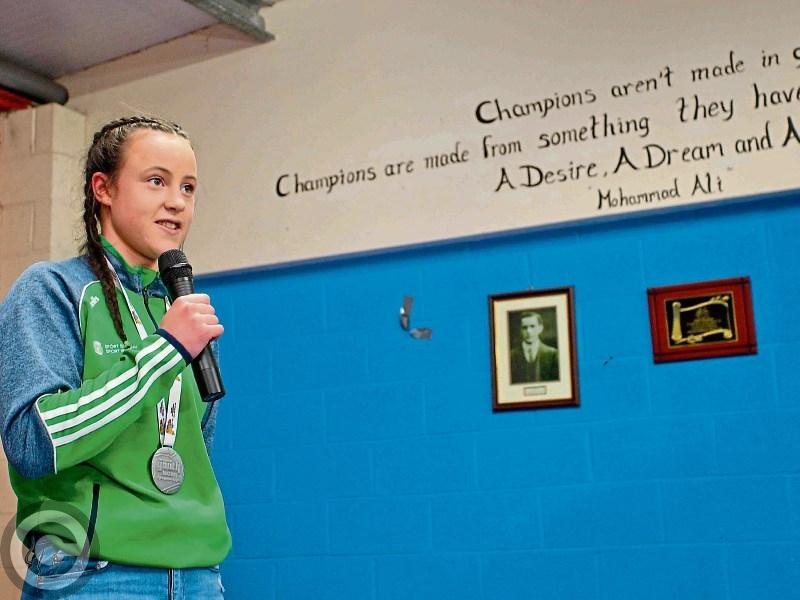 Déarbhla Rooney may have created Leitrim sporting history last week in Italy but the county’s new European medalist is determined not to rest on her laurels, claiming she hasn’t reached her full potential yet.

Taking a bit of time out during a hectic homecoming event in Manorhamilton last Thursday evening to chat to the Observer, it is obvious that the drive and ambition inherent in all sporting greats is very much present in the young Mullies woman.

A big shiny European medal may have been hanging around her neck but Déarbhla was already planning ahead and is hoping for a rematch with Slovakia’s Jessica Triebelova who defeated her in last Wednesday’s 57kg Final.

Tellingly, Déarbhla told the Observer “She (Triebelova) won the fight fair and square but I think, if I meet her at the Worlds, I might know how to handle her. She was a very smart boxer, she’s been around a long time and is very experienced.

“She was very strong, a lot taller than me and she was southpaw as well, she also liked to fight at long distance and she had a longer range than me. I think if I had put more pressure on her - I put a lot of pressure in the third round and I felt I won that round well.

“If I meet her in the Worlds, I’ll put a lot of pressure on her from the first round,” promised the Sean McDermott Boxing Club fighter.

The Final saw Déarbhla receive two standing counts from the referee and it was obvious that those warnings rankled - “The referee was watching me from the very beginning. The first count was ridiculous. Thirty seconds into the fight, I thought I was doing well, I was getting into my rhythm, I could see him looking at me.

“I thought I landed shots on her and then he started counting me and I couldn’t believe it, I was shocked. I looked over at the corner and they couldn’t believe it either. It completely threw me off, I was picking up momentum and it just looked bad for the judges.

“I was given another count which was debatable in the second round. He was watching me from the very beginning, before a punch was even landed on me.”

And once Déarbhla got over her initial disappointment, the delight at winning a medal came flooding in - “Of course, as soon as the fight was over, I was disappointed but after that, I just kind of realised I’ve learned so much from going over there, I’ve brought back so much experience.

“Initially, that was all I was wanting to bring back was experience. I ended up bringing back a European silver medal. I am so honoured, I am so proud to have brought a medal back to Leitrim. This time last year, I didn’t even imagine I’d be making the Irish team let alone bringing home a medal.”

And perhaps that is what makes Déarbhla’s story so remarkable as she missed an entire year, ravaged by the effects of glandular fever - “I got it (glandular fever) awful bad, I had to take the whole year off boxing and I think a lot of people thought I wasn’t going to come back to boxing because it is so hard to get back up the fitness.”

But then again came a telling remark indicative of the drive Déarbhla possesses - “But I knew I hadn’t reached my full potential yet and I wanted to go and give it a go.”

Looking back over the entire championships, Déarbhla admitted that the nerves were worse not for the final but for the first round - “That fight was against the Polish girl and I suppose I was the most nervous going into it because it was my first international flight.

“I couldn’t visualise going out because it was all completely new but I was delighted after the fight with how I did. Going into the next fight, I knew exactly what I was doing so I wasn’t so nervous. I had Mike Mongan and Michael Carruth in my corner and they were just fantastic.

“Underneath the stand, they were just so calm, they really just helped keep the nerves down, they have so much experience behind them. Going into the semi-final, I was content with the bronze medal and I didn’t think I’d be able to beat the Russian because she was so well known and I was watching her fight.

“She was very skillful and an awkward kind of boxer to fight against, I never fought against anyone like her. She was very fast and strong inside, short range boxing sort of thing and I like long range, keeping a distance.”

And even Déarbhla admitted she didn’t know herself if she had won the dramatic semi-final against Valeri Radionova - “I suppose I had a bit of self doubt going into it and Mike Mongan said to me ‘just get rid of all the negative thoughts and believe in yourself’, that I could beat her and show much I want to win it and the last round I just wanted to leave it all in the ring.

“I wasn’t sure if I had it, before the decision was made Michael said it will be a split decision, I still didn’t think I had it but we all jumped for joy then,” said Déarbhla, a reaction shared over all Manorhamilton and Leitrim!